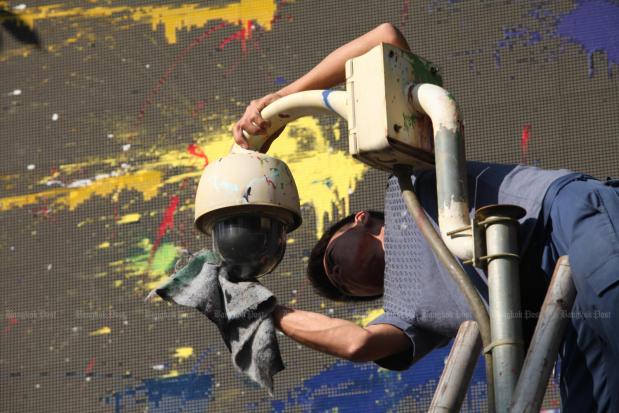 A workman wipes paint off a traffic camera that was splashed during pro-democracy protests on Wednesday night at the Royal Thai Police headquarters. Photo by Apichart Jinakul

Prime Minister Prayut Chan-o-cha on Thursday declared that "all laws and all articles" will be enforced against protesters who break the law.

Prayut gave his warning after street rallies by pro-democracy protesters demanding his resignation, as well as reform of the monarchy.

He said the government and various agencies had tried to find a peaceful way out of the conflict.

However, the situation has showed no sign of easing, Prayut said.

"The situation is not easing and there is a tendency for conflict to escalate into more violence. If not addressed, this could cause damage to the country and the beloved institution, as well as to peace and the safety of people's lives and property," Prayut said.


"It is necessary for the government and security agencies to intensify their actions by enforcing all laws and all articles to take action against demonstrators who break the law and show no respect for the rights of other people," he said.


Many thousands of pro-democracy protesters descended on Ratchaprasong intersection during their huge rally on Wednesday night.

Expletives were painted on walls and on roads during the rallies. The People's Movement protesters announced the next rally will be on Nov 25.

Click "play" to listen to Prayut threatens protesters and "Download" to keep this file for educational purpose.

article : part of a legal document, agreement or law that deals with a particular point - มาตรา

ease : to relieve; to make a problem, situation or pain less severe or serious - บรรเทา

escalate : to become much more serious or much worse - ทำให้เพิ่มขึ้น, ทำให้มากขึ้น

tendency : likely to behave or act in a particular way - นิสัย, ท่าทาง