Few were surprised yesterday when Khunying Jaruvan vowed to fight a court verdict stripping her of her position as auditor-general. 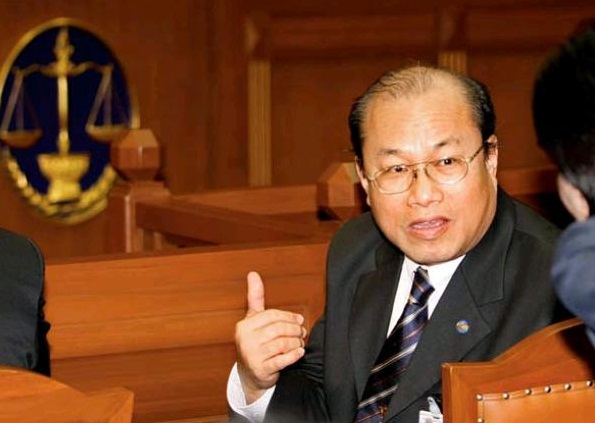 Acting auditor-general Pisit Leelavachiropas appears at the Administrative Court yesterday to hear the verdict on whether Khunying Jaruvan Maintaka can keep the top job at the state audit office. TAWATCHAI KEMGUMNERD

The Administrative Court ruled yesterday that Khunying Jaruvan could no longer remain in the position of auditor-general since she reached the mandatory retirement age of 65 on July 5.

Instead of packing her belongings and enjoying life as a retired civil servant, however, Khunying Jaruvan vowed to stay on the job and appeal the court ruling.

She contends that an order issued by the Council for National Security, formed after the military coup in 2006, allows her to remain auditor-general until a replacement is found.

‘‘If the interpretation goes that way [that the CNS order overrides the state audit law on the auditor-general’s qualifications], it would mean an auditor-general who is dead, has resigned, is running in an election to be an MP or senator, or has become a drug addict would still be able to carry on working as auditor-general,’’ said chief judge Somchai Wattanakarun in reading out the verdict.

Such an interpretation would be very disruptive to the state audit office’s function, the court said.

Khunying Jaruvan and acting auditor-general Pisit Leelavachiropas have been locked in a heated battle over who has authority over this important government agency in charge of checking the government’s finances.

Yesterday, the court ruled that as Mr Pisit’s appointment to his position was lawful, he was entitled to exercise his authority as acting auditor-general.

Mr Pisit said he hoped Khunying Jaruvan understood what needed to be done to follow the court’s ruling, such as returning her office and car.

There doesn’t seem to be much chance of that happening.

Adapted from a story by Surasak Glahan and Mongkol Bangprapa in today’s Bangkok Post.

Administrative Court – the court which deals with disputes between the private sector and government agencies ศาลปกครอง
rule  – (of a court) to make a decision พิพากษา, ชี้ขาด
auditor – someone whose job is to officially examine the financial records of a company, organisation, or person to see that they are accurate (the auditor-general is the head of the government’s auditing department) ผู้สอบบัญชี
mandatory – ordered by a law or rule ตามข้อบังคับ
retirement – the time when you stop working, especially because of old age เกษียณอายุ
belongings – the things you own ข้าวของเครื่องใช้
civil servant – someone who works for a government department ข้าราชการ
vow – to make a formal and serious promise to do something สาบาน, ปฏิญาณ
appeal – a request to a court to change a decision by a lower court อุทธรณ์
contend – to claim that something is true ยืนยัน
issue – to announce something officially ออกประกาศ
coup (d’etat) – the seizure of power in a country by a group of people, usually members of the armed forces รัฐประหาร
replacement – someone or something that takes the place of another ผู้การทำหน้าที่แทน, การทำหน้าที่แทน
interpretation – an explanation of the meaning or importance of something การตีความ
override – to use official authority to ignore or change a decision that someone else made ยกเลิก,  ล้มเลิก
state – government รัฐบาล
qualifications – the abilities, qualities, degrees, etc. that you need for a particular job or activity คุณสมบัติ, คุณวุฒิ
resign – to leave a job permanently ลาออกจากตำแหน่ง
addict – someone who takes illegal or harmful drugs and cannot stop ผู้ติดยาเสพย์ติด
verdict – a decision by a court of law คำพิพากษา
disruptive – causing difficulties that interrupt something or prevent it from functioning normally ที่แตกแยก
function – the job that something is designed to do การปฏิบัติหน้าที่
acting – doing the work of the usual person in a particular job while they are not there, or until a new person starts ที่รักษาการแทน
heated – angry โกรธ, ฉุนเฉียว
authority – power อำนาจ
lawful – not against the law; officially accepted by the government or another authority ซึ่งถูกต้องตามกฎหมาย
entitled – having the right to have or do something  มีสิทธิโดยชอบ
exercise – to use your power or rights ใช้อำนาจ