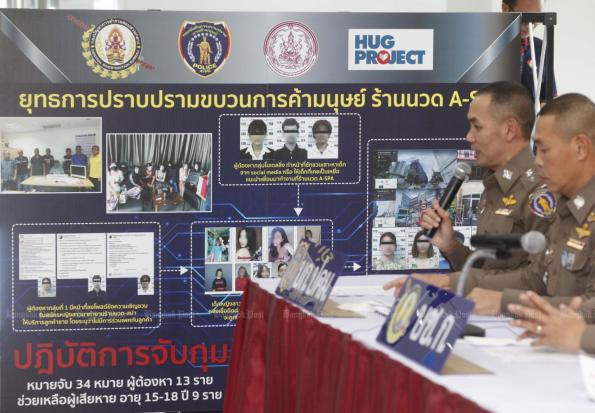 The Central Investigation Bureau uses a chart to demonstrate a raid on a spa in Nonthaburi's Muang district in which 12 people were arrested in connection with human trafficking and nine girls aged under 18 were rescued. Photo by Pattarapong Chatpattarasill

Twelve people were held by police following a raid on a spa in Nonthaburi on Tuesday.

The raid happened after authorities learned that the spa was offering sex services to customers.

"We also found that [the spa's managers] procured female sex workers, including some who were under 18, for its customers," police said, adding nine girls under the age of 18 were rescued during the raid.

He said the spa, which opened in June last year, didn't have a licence and was simply a front for prostitution.

As such, those who were found to be involved in the operation will face charges of child prostitution.


Police had received a tip that the spa was known to recruit attractive female workers through social media.

Click "play" to listen to Spa raid finds teen sex workers and "Download" to keep this file for educational purpose.

front : a fake company or identity used to hide who is really running or owns the business, criminals or politicians, for example -

procure : to provide a prostitute for somebody -

raid : to use force to enter a place suddenly in order to arrest people or search for something such as illegal weapons or drugs - บุกเข้าจับ, เข้าตรวจค้น

recruit : to get someone to work in a company or join an organisation - จ้างงาน

spa : a place where people can stay to improve their health by eating well and exercising and sometimes also by drinking or bathing in water with natural substances in it -

tip : secret information that somebody gives, for example to the police, to tell them about an illegal activity that has happened or is going to happen - ข้อมูล