Thais to get Covid vaccine by mid-2021 | Bangkok Post: learning 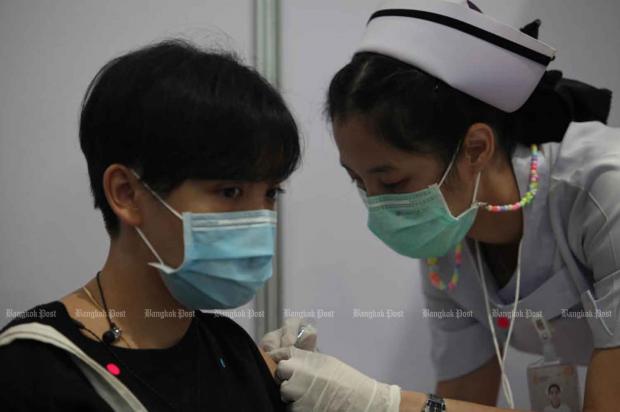 Thai people will get their first shots of a Covid-19 vaccine by mid-2021 at the earliest.

The vaccine developed by AstraZeneca and the University of Oxford will be produced locally by Siam Bioscience Group, located in Pathum Thani.


Dr Nakhon Premsri, director of the National Vaccine Institute (NVI), told media on Tuesday he was confident that the British pharmaceutical group AstraZeneca will get vaccine approval soon from the United Kingdom's Food and Drug Administration after the announcement about the vaccine was made early this week.


"If the vaccine gets approval from the Thai FDA, we will start our production for the public by the middle of next year. We are confident that the vaccine made by AstraZeneca will shortly get approval from the UK-based FDA, as it has a high efficacy rate of 70% that is higher than the WHO's requirement of 50%," he said.

About 3,000 people were given a half dose and then a full dose four weeks later, with data showing 90% were protected. In the larger group, given two full doses also four weeks apart, the efficacy was 62%.

Dr Opas Kankawinphong, acting director of the DDC, said that the government would spend 3.7 billion baht to prepare for the vaccine's transportation and storage, and its monitoring system as well as on a campaign to raise public awareness about how to get the vaccine.

He said the Covid-19 vaccine will be the most extensive vaccination programme ever in Thailand.

"Giving 26 million doses of vaccine to over 13 million people is unprecedented in Thailand. So we need to make everything work, especially when it comes to creating awareness among the public," he said.

Click "play" to listen to Thais to get Covid vaccine by mid-2021 and "Download" to keep this file for educational purpose.

approval : agreement to do or accept something - ความเห็นชอบด้วย

campaign : a series of actions intended to produce political or social change - การรณรงค์

unprecedented : never having happened before - ที่ไม่เคยเกิดขึ้นมาก่อน