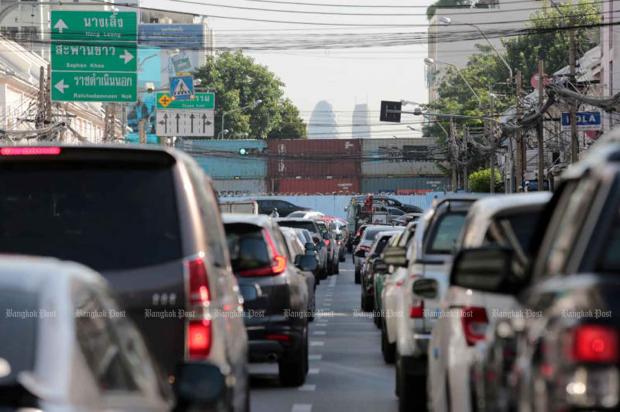 Rolls of razor wire and barricades were placed around royal ground in Dusit and Phra Nakhon districts on Wednesday, blocking important places including the Crown Property Bureau and Government House.

The barricades were installed even though anti-government protesters announced they were moving their afternoon rally from the CPB to SCB Park, the headquarters of Siam Commercial Bank, in Chatuchak district.

Cargo containers were stacked on roads to Government House, Royal Plaza and the Crown Property Bureau.

Soldiers in plain clothes were seen around the CPB, which anti-government protesters had earlier announced as their target on Wednesday.

Ongoing anti-government protests and the police responses have caused heavy traffic congestion in the capital.

Youth-led protesters have demanded the resignation of the prime minister, constitutional changes and the reform of the royal institution.

Click "play" to listen to Bangkok roads blocked ahead of rally and "Download" to keep this file for educational purpose.

barricade : a temporary structure built to prevent someone/something from getting past - แผงหรือแนวรั้วกั้น

plain clothes : police wearing plain clothes; not dressed like police so people do not know they are police; working under cover to gather information -

target (noun): an object, person, business, building, area, etc., that someone intends to attack, deal with or find - เป้าหมาย