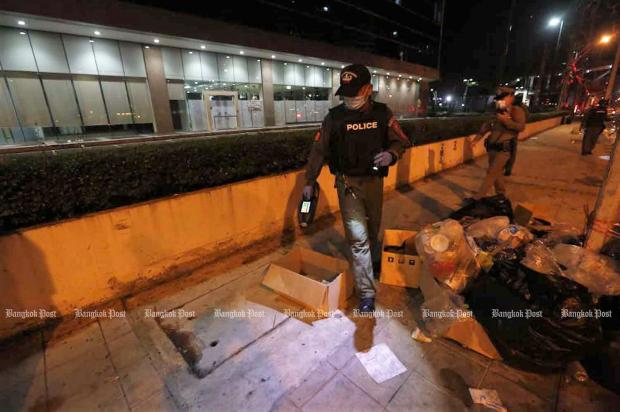 Police examine the protest site outside Siam Commercial Bank headquarters, across from the area where the shooting occurred, in Chatuchak district, Bangkok, after the rally ended on Wednesday night. (Photo: Arnun Chonmahatrakool)

The shooting after the protest at SCB Park ended on Wednesday night involved students from rival schools who worked as guards during the rally, according to police.

Pol Maj Gen Piya Tawichai, deputy commissioner of the Metropolitan Police Bureau, said on Thursday the incident occurred after the rally ended outside the headquarters of Siam Commercial Bank (SCB).

Gunshots were heard and an explosion, possibly a firecracker, about 10pm.

The deputy commissioner said a young man with one group of vocational students fired shots at a group of rival students. One person was wounded, taken to Praram 9 Hospital and admitted to intensive care.


The students were from Minburi Technical College in Bangkok and Pathumthani Vocational Education College in Pathum Thani province.


Police later reported that two people had actually been injured during the shooting on Wednesday night.

The second was the gunman, who was beaten up and later taken to Saint Louis Hospital.

Click "play" to listen to 'Rival students' blamed for rally shooting and "Download" to keep this file for educational purpose.

beaten up : when a person is hit or kicked hard, many times ตีจนบาดเจ็บอย่างรุนแรง -

commissioner : the head of a particular police force in some countries - ผู้ตรวจการณ์

explosion (noun): the sudden violent bursting and loud noise of something such as a bomb exploding; the act of deliberately causing something to explode - การระเบิด

firecracker : a kind of firework that makes a lot of loud noise when it explodes - ประทัด