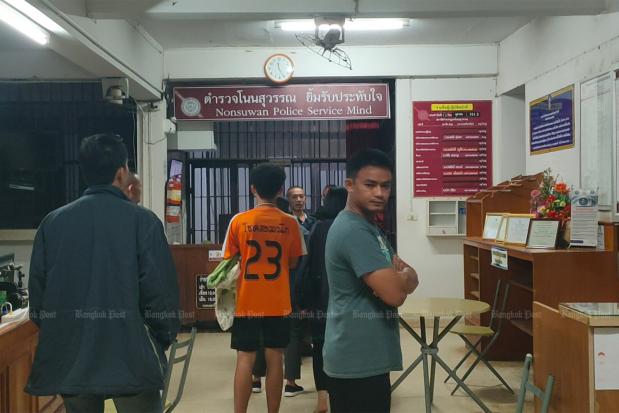 Angry relatives of the woman shot dead by a policeman in a local restaurant, at Non Suwan police station on Sunday night. (Photo: Surachai Piragsa)

BURI RAM: A 44-year-old policeman stormed into a restaurant and opened fire with a gun, severely wounding his ex-wife and killing a married couple on Sunday night.

He allegedly shot his ex-wife, and two other people.

The three victims were admitted to Non Suwan Hospital, where two died. The ex-wife was referred to Buri Ram Hospital in a serious condition.

Police said Aram and wife had divorced but they still lived in the same house because they had two children.

Aram had just returned from Bangkok, where he was policing an anti-government demonstration on Nov 27.

After the shooting, Aram waited at the restaurant and surrendered when police arrived.

divorce : to take legal action to end a marriage - หย่า