10,000 to be tested after Samut Sakhon outbreak spreads to Bangkok | Bangkok Post: learning 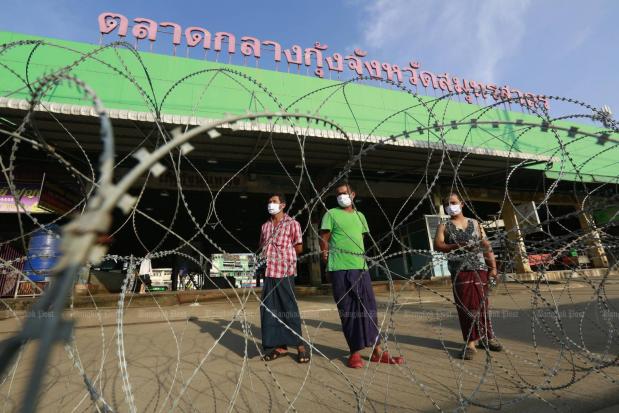 Migrant workers from Myanmar stand behind razor wire blocking the entrance to the Central Shrimp Market linked to an outbreak of Covid-19, in Muang district of Samut Sakhon on Sunday. (Photo by Arnun Chonmahatrakool)

Thailand confirmed 576 new coronavirus infections on Sunday, including 516 migrant worker cases linked to the outbreak in Samut Sakhon announced the day before, the government said, before additional cases were found in Nakhon Pathom.

The new cases include 19 locally transmitted cases in Bangkok and in the neighbouring province of Samut Sakhon, now locked down, where the 516 inflections were also found.

All of them were linked to a shrimp market in Samut Sakhon, according to the Centre for Covid-19 Situation Administration (CCSA).

There were also 41 imported cases.

Tests conducted in Samut Sakhon since Thursday have found 516 people infected, most of them Myanmar migrant workers. Test results on another 1,453 people are due shortly.

The first case in Samut Sakhon, a vendor at the Central Shrimp Market, was found on Dec 13. Since then, the virus has spread outside the province, including to Bangkok.

CCSA spokesman Taweesilp Visanuyothin said one case in the capital was a 78-year-old woman who lives in Bang Sue district. She drove to the market to buy shrimp to sell at her stall every day from Dec 1-11. On Dec 12 she fell ill, and tested positive on Friday.

Additional Covid-19 cases – not included in Sunday's update – have been found in Nakhon Pathom, where the provincial public health office said two migrant workers had been infected with the virus. Both cases were related to neighbouring Samut Sakhon, it said.


By Wednesday the authorities aim to conduct 10,300 tests in Samut Sakhon, Nakhon Pathom and Samut Songkhram.

import : to buy or bring in products from another country - นำเข้า

stall : (n) a table or small shop with an open front that people sell things from, especially at a market -