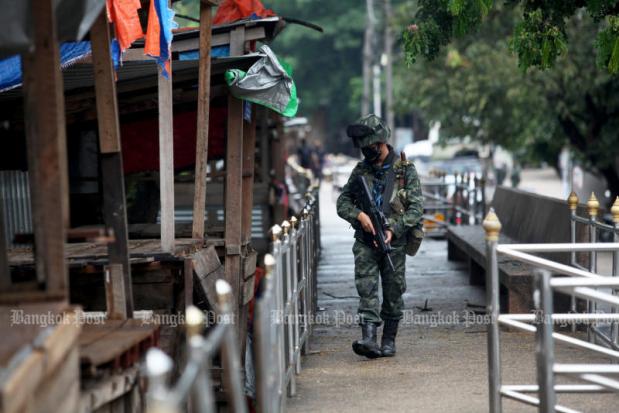 The border district of Mae Sot is on alert for a large number of Thais working in a casino in Myawaddy to flee the coronavirus in Myanmar.

Opas Kankawinpong of the Disease Control Department expected hundreds of Thais to move back through the district in Tak soon after the province temporarily reopens the checkpoint to allow them through.

“We have estimated hundreds of Thais are stuck there. We don’t know how many of them have been infected,” he said.

The latest batch of Thai returnees -- believed to number 40 -- arrived on Thursday. Seventeen of them tested positive and were sent to Mae Sot Hospital. They worked for the Sky Complex casino, just across the Moei River that separates Mae Sot and Myawaddy.

Security officials estimated a total of 300 local and Thai staff work at the casino. Myawaddy is home to several other casinos, but the latest group of returnees worked at Sky Complex.

It was unclear when the district will open the border for them to come back.

The temporary reopening is intended to prevent Thai workers crossing back over the river illegally, making it easier for health authorities to control the virus.

Mae Sot had prepared field hospitals to receive the Thais from Myawaddy, in addition to the main hospital in the district town.

Mae Sot has confirmed at least 60 Covid-19 cases since Monday, including 17 new transmissions announced on Sunday by the Centre for Covid-19 Situation Administration.

Click "play" to listen to Mae Sot expects hundreds of Thais from Myanmar casino and "Download" to keep this file for educational purpose.

casino : a building where gambling games, especially roulette and card games are played for money - บ่อนการพนัน

expect (verb): to think or believe that something will happen or that somebody will do something - คาด, คาดว่า, คาดการณ์

illegally : in a way that is against the law - อย่างผิดกฎหมาย

stuck : unable to move, or fixed in a particular position or place - ติด