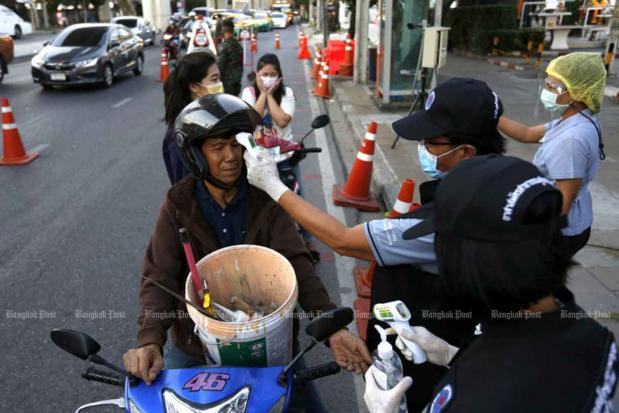 Health officials in Samut Prakan check motorists' body temperature at a road checkpoint in Muang district as part of the government's measures to curb the spread of Covid-19 in the country. Photo by WICHAN CHAROENKIATPAKUL

This is despite cases in the capital rising on Monday by 37 and bringing its tally to 1,989.

A BMA spokesman said the situation in the capital was likely to improve, provided that there were no new superspreader events, after it imposed urgent measures to contain the coronavirus pandemic.

"If the number of new cases drops within a fortnight and clusters in other provinces are confined, the BMA might consider lifting restrictions," he said.


He said that City Hall had been able to identify the origin of the latest infections and was keeping a close watch on two main clusters, one relating to entertainment venues in the capital and the other in Si Racha district of Chon Buri province.

The two clusters consisted of 135 cases in total, he said, adding that some people from Bangkok had brought the virus home with them from Si Racha during the New Year.

hint : to say or do something that shows, but not directly, what is meant - แย้ม

lift : to end a warning, a restriction, etc. - ยกเลิก

massage parlour : a place where you can pay to have a massage - โรงนวด,สถานบริการ (อาบ,อบ,นวด)

restriction : a rule, action or situation that limits or controls someone or something - การจำกัด, การควบคุม

superspreader : someone who can spread a virus and cause infection in many people with minimal contact -