An unwise plan to delay his flight got a man a different kind of trip. 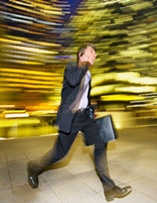 SEOUL: A South Korean who was running late for his holiday flight has been detained for allegedly phoning in a bomb threat to delay the plane’s departure, police said yesterday.

The man identified only as Shin called Gimpo airport west of Seoul on Monday and claimed a bomb would explode on a flight bound for the southern resort island of Jeju.

Shin made the call from a payphone. Four Jeju-bound flights were delayed for up to two hours for searches. Shin made his flight but was arrested after he returned to Seoul on Wednesday. AFP

hoax – a plan to deceive someone, such as telling the police there is a bomb somewhere when there is not one, or a trick การหลอกลวง,เล่ห์กระเท่ห์,เล่ห์เหลี่ยม
detained – kept in a place, e.g., a jail, and not allowed to leave กักตัว ควบคุมตัวหรือฝากขัง
allegedly – claimed to have done something wrong, but not yet proven ที่กล่าวหา
threat – saying that you might do something bad or harmful, especially in order to make someone do something  การขู่เข็ญ การคุกคาม ทำให้กลัว
delay – to make something happen at a later time than originally planned or expected เลื่อน
departure – leaving ออกจาก
identify – to specify who someone is  ระบุชื่อ
bound for – going to มุ่งหน้าไป
search – looking somewhere or through something carefully in order to find something การค้นหา
arrest – (of the police) to take someone to a police station because they are believed to have committed a crime จับกุม