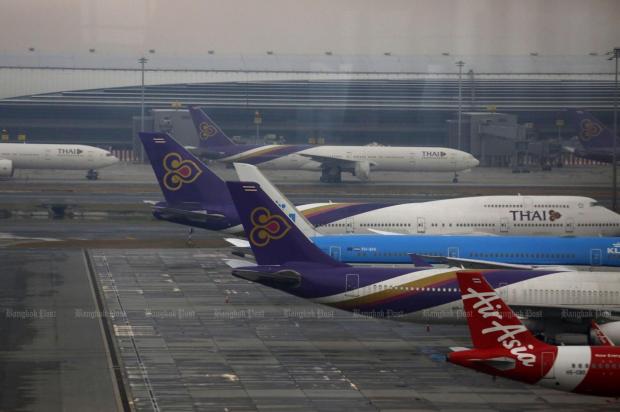 Airlines and hotels said the tourism situation this year is a worse crisis than 2020, leaving them hoping for help from the government.

Tassapon Bijleveld, executive chairman of Asia Aviation, the largest shareholder of Thai AirAsia (TAA), said when international tourists return in the future, Thailand might not have enough supply to serve them as most operators have already shut down due to financial problems.

Mr Tassapon said that local tourists skipped flying and chose destinations within driving distance, particularly after the wave of Covid-19 starting from December.

The Civil Aviation Authority of Thailand reported that the number of domestic passengers tumbled 27.1% year-on-year in the fourth quarter, while international flights dropped by 99.1% in the period.

TAA is now only operating 20 flights per day on average with just 10 aircraft, down from 40 jets prior to the second outbreak, while it has a total of 62 in the fleet.

"Not only are airlines facing an impact, but half of the restaurants and shops in Don Mueang airport have had to close temporarily which could indicate the lower level of consumption," said Mr Tassapon.

He said all of airlines may have to wait for soft loans under the supervision of the Export-Import Bank of Thailand (Exim Bank).

The Thai Hotels Association said the crisis this time is more difficult to deal with as it's hard to predict when business can get back to normal.

The THA said 50% of hotels nationwide have been closed, while remaining hotel operators and their workforce struggle to survive.

Click "play" to listen to Tourism going from bad to worse and "Download" to keep this file for educational purpose.

fleet : a group of vehicles, planes, boats, or trains, especially when they are owned by one organisation or person - กลุ่มรถแท๊กซี่, รถโดยสาร, หรือเครื่องบินที่อยู่ในบริษัทเดียวกัน

predict : to say that an event or action will happen in the future, especially as a result of knowledge or experience - คาดการณ์ว่า พยากรณ์จากสถิติว่า

shareholder : a person who owns some of the equal parts into which the ownership of a company is divided - ผู้ถือหุ้น

skipped : to not do something that you usually do or that you should do; to avoid - ไม่เข้าร่วม, ขาด

soft loan : a loan with a very low rate of interest - เงินกู้ดอกเบี้ยต่ำ

supply (noun): an amount or quantity of something that is available to buy or use - อุปทาน

tumble : to fall down - ล้ม,ล้มลง,ตกลง,หกคะเมน