Little kids get a chance

Thai kindergartners, aged 4 - 6, are going to Malaysia to compete in an international marching band competition. 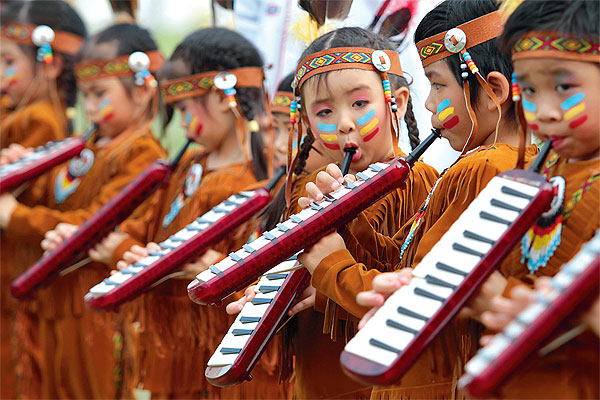 A melodian band made up of 52 young pupils from Chutaporn Kindergarten gives a performance during a news conference yesterday at Srinakharinwirot University. The band will represent Thailand in the 4th World Marching Band Competition in Malaysia next month. JETJARAS NA RANONG

Little kids get a chance

Thai marching bands have won many championships, but those are big kids – like 15 years old or even older.

Now its time for some little kids to get their chance – very little kids.

For the first time, a group of kindergarten children has been chosen to represent Thailand in a world marching band competition in Malaysia.

The band members, 52 of them from Chutaporn Kindergarten, are 4-6 years old. They will show off their talent at the 4th World Marching Band Competition from Dec 12-18 at Merdeka stadium in Kuala Lumpur.

Their principal, Chutaporn Phutayanon, said the melodian band was made up of Grade 2 and 3 kindergarten children. The team will join marching bands from several countries in a contest that will last eight to ten minutes.

"Our kids have practised for over six months – three hours after classes on weekdays and at least nine hours on Saturday," she said.

"Now they are rehearsing harder to prepare themselves."

It is not easy to keep such little children interested for long periods of time. The band trainer, Khanesorn Srirong, said he had a problem getting the children to concentrate at first, so he came up with tricks to hold their attention.

The band will leave for Malaysia on Dec 11 to practise at the stadium. They will be accompanied by their parents.

competition – an organised event in which people try to win prizes by being better than other people การแข่งขัน
championship – a competition to find the best player or team in a sport or game การแข่งขันเพื่อได้ตัวผู้ชนะเลิศ
contest – a competition การแข่งขัน
kindergarten – a school for children, usually between the ages of two and five โรงเรียนอนุบาล
represent – to act, speak or be present officially for another person or people เป็นตัวแทน
talent – a natural ability to be good at something, especially without being taught ความสามารถพิเศษ
stadium – a large closed area of land with rows of seats around the sides and often with no roof which is used for sports events and musical performances สนามกีฬาที่มีอัฒจันทร์โดยรอบ
principal – the head of a school ครูใหญ่
(Suzuki) melodian – a small organ-like instrument for children (see photo)
rehearse – to practise something you are going to do or say ซ้อม
concentrate – to give most of your attention to one aim or activity  เพ่งความสนใจไปยัง  มุ่งไปที่
trick – a special and effective and skilful way of doing something  วิธีพลิกแพลง, เทคนิคพิเศษ
attention – the interest or thought that you give to something you are doing, listening to or watching ความสนใจ, ความตั้งใจ
accompany – to go with someone ไปกับ,ไปด้วยกัน,ไปเป็นเพื่อน