Successful coach may be hard to keep 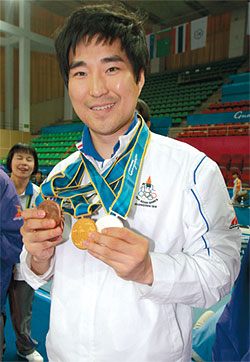 Things looked bad near the end of the taekwando final for Thailand’s Sarita Phongsri . She was trailing her opponent 3-1 and had just received a nasty eye injury.

Her Korean coach, Choi Young Seok, was by her side as she received medical treatment, however, encouraging her to do her best. When the match resumed, she quickly landed a beautiful back kick, winning Thailand first gold medal at the 16th Asian Games in the process.

"Coach Chay," as he is known among Thai fans, has been an inspiration to all the kingdom’s taekwando athletes who have had a remarkably successful performance at the Games. Altogether the Thai team won two gold, two silver and four bronze medals.

Now, the big problem may be keeping the young coach. Coach Chay admits he has been offered lucrative contracts by many countries.

Preecha Tortrakul, senior official of the Taekwondo Association of Thailand, said Vietnam and the Philippines had both offered him 50% more than his current salary of 180,000 baht a month.

He says Coach Chay is under contract only until the 2012 Olympic Games.

Fortunately for Thailand, the Korean coach says he doesn’t want to leave.

‘‘Many countries have approached me,’’ said the coach who has been in charge of the team for eight years. ‘‘But I want to stay in Thailand. I love the country and my team.’’

He said he would discuss his contract when he returns to Thailand.

As for his team’s performance at the Asian Games, he said he was generally happy, but thought they could have done even better.

‘‘We should have taken more gold medals. I thought Pen-ek Karaket would win.’’

Adapted from a story in today's Bangkok Post by Kittipong Thongsombat

trail – to be behind some in a competition ตาม
opponent – a person or team being competed against in a sports event คู่ต่อสู้
nasty – bad or very unpleasant อันตราย, น่าวิตก
injury – physical damage done to a person or a part of their body อาการบาดเจ็บ
encourage – to cause someone to have more confidence or hope about something ทำให้มีกำลังใจ
resume – to begin again after stopping for a period of time ดำเนินต่อไปใหม่
land – to achieve something, in this case, hitting the opponent with a successful kick
inspiration – someone or something that gives you new ideas or enthusiasm to do something แรงบันดาลใจ
athlete – someone who is good at sports and takes part in sports competitions นักกีฬา
remarkably – in a way that is unusual and surprises or impresses you อย่างน่าอัศจรรย์ใจ
performance – the standard to which someone does something การกระทำ, การแสดง, การทำให้บรรลุผลสำเร็จ
lucrative – earning a lot of money ที่มีกำไรงาม
senior – with a high rank or position อาวุโส
official – someone with an important position in an organisation  เจ้าหน้าที่
salary – a fixed amount of money that you earn each month or year from your job เงินเดือน
fortunately – used for emphasizing that something good has happened, especially because of good luck  อย่างโชคดี, อย่างเคราะห์ดี
approach – to start to speak or write to someone when you are asking for something or making an offer เข้าหา
in charge of – to be in control of an activity and to check that everything is being done correctly  ดูแล ควบคุม