Once again huge crowds moving in a narrow space lead to panic and a deadly stampede, this time at Cambodia's Water Festival. A man injured in the stampede waits for medical treatment.

There is a very sad story coming out of the Cambodian capital Phnom Penh this morning. More information is coming out by the minute, but briefly here is what we know as of seven o’ clock this morning.

More than 300 people were killed and hundreds were injured last night after a stampede broke out among crowds taking part on the last night of the city’s huge Water Festival.

People panicked as they tried to make their way over a newly-built and densely packed bridge that crosses from the mainland over the Bassac River to Diamond Island. They were on their way to a concert which was to conclude the Water Festival.

Reporter Julie Masis of the Christian Science Monitor quotes one man who was on the bridge as saying that the structure became completely clogged at 9 p.m. and the stampede broke out about 11 p.m. His legs were injured and he was unable to get off the bridge until 1 a.m.

As is typical of such situations, the exact cause of the stampede is still unclear at this time. Reuters reported that a scare was set off when several people were electrocuted from an unknown source. CNN, interviewing Steve Finch, a journalist with the Phnom Penh Post, reported that Cambodian police sparked the stampede by firing a water cannon at pedestrians to get them to move off the bridge. 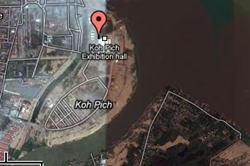 Phnom Penh’s Diamond Island where developers say the plan to create a "consumer's paradise". Many projects, including a "ghost house" and a skating rink were rushed to completion for this year's Water Festival.

The government denied anyone was electrocuted.

But a doctor who declined to be identified publicly said the main cause of death was suffocation and electrocution.

Police were among the dead, Finch said.

What is known is that crowd was huge. Some estimates say as many as four million people attended this year’s festival.

stampede – (of a large group of people or animals) to run in an uncontrolled way because they are frightened or excited
briefly – in a way that does not take much time or give many details สั้นๆ
injured – hurt in an accident or attack ซึ่งได้รับบาดเจ็บ
festival – an event that is held to celebrate a particular thing or activity เทศกาล
panic – a sudden strong feeling of fear or worry that causes you to be unable to think clearly or calmly ความตื่นตกใจ
densely packed – very crowded แน่นขนัด
mainland – a large mass of land that forms the main part of a country but does not include any islands belonging to the country  แผ่นดินใหญ่
conclude – to finish จบ
quote – to repeat the words that someone else has said or written ยกคำพูดมา
structure – something large such as a building or a bridge that is built from different parts โครงสร้าง
clogged – blocked, so that nothing can get through ตัน
break out – (of something bad) to start เริ่มต้นทันที
typical – happening in the usual way; showing what something is usually like ตามแบบฉบับ, ตามปกติ
scare – a situation that makes people suddenly feel worried or frightened about something ความหวาดกลัว, ความตื่นตระหนก
set off –  to cause a situation or a series of events to happen, especially without intending to ก่อให้เกิด
electrocute – to kill or injure someone with electricity  ฆ่าหรือทำร้ายด้วยกระแสไฟฟ้า
source – the cause of something – ต้นกำเนิด
journalist – a person who writes news stories or articles for a newspaper or magazine or broadcasts them on radio or television ผู้สื่อข่าว
spark – to make something happen ก่อให้เกิด
pedestrian – a person who walks, especially in an area where vehicles go คนเดินถนน
deny – to say that something is not true or does not exist ปฏิเสธ
decline – to say politely that you will not accept something or do something ปฏิเสธ
identify – to specify who someone is  ระบุชื่อ
suffocation – dying from a lack of air to breathe
estimate – an amount that you guess or calculate using the information available ประมาณการ