Music and fun in Pattaya

Rain is coming to Pattaya and it’s not the wet stuff we’re talking about. Includes a fun activity. 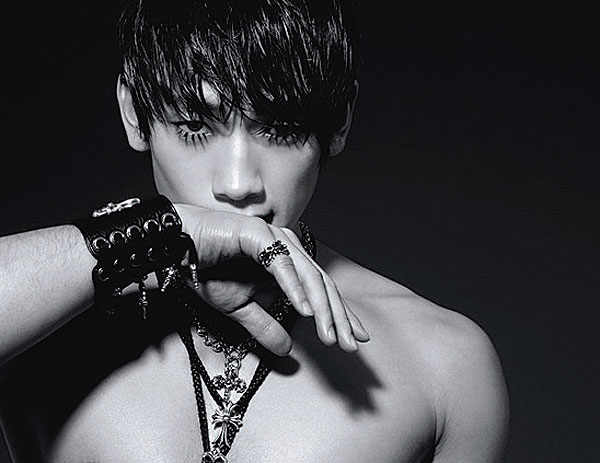 Rain (above) and Son Dam Bi will be flown in from Korea to wow their Thai fans during the Pattaya International Music Festival 2011.

Music and fun in Pattaya

Rain is coming to Pattaya and it’s not the wet stuff we’re talking about.

Instead it is the superstar Korean singer and he will not be alone. Son Dam Bi is flying in too and they will be joined by an army of famous Thai and foreign artists for the Pattaya International Music Festival 2011.

The  three-day event will take place from March 18-20 starting at 6pm till midnight.

There will be four enormous stages located on the beach from North Pattaya to South Pattaya. One of them is the Universal Stage (located next to Hard Rock Hotel) on which Asia's superstar Rain and the hot and gorgeous Son Dam Bi will perform on March 19 from 9pm onwards.

As this year's theme has an Asian flavour, we will see the first-ever reunion of many popular artists from many Asian countries performing alongside their Thai counterparts on the beach.

They include Johnny's Junior, A.B.C-Z, Kis-My-Ft2, B.I. Shadow and Question from Japan; Derrick Hoh from Singapore; Will Ng from Malaysia; Super Kidz from Indonesia; PAK from Vietnam; Nina from the Philippines; and Tik Princess from Laos.

Held for 10 consecutive years, the popular Pattaya International Music Festival is one of the most anticipated events of the city for both Thai and foreign tourists.

army – a large group of people กลุ่มคน
enormous – extremely large มหาศาล
located – where something is ตั้งอยู่
stage – a raised area, usually in a theatre, etc. where actors, dancers, etc. perform  เวที
gorgeous – very beautiful and attractive โอ่อ่า, หรูหรา, สง่างาม
theme – the main subject of something ใจความสำคัญ, ประเด็นหลัก
flavour – a particular quality or atmosphere รสชาติ, ลักษณะเฉพาะ
reunion – a situation in which people meet each other again after a period of time when they have been separated การพบกันอีกครั้ง
counterpart – someone who has the same job or purpose as another person or thing, but in a different country, time, situation, or organisation  ผู้ที่ทำงานประเภทเดียวกัน; ผู้ที่อยู่ในตำแหน่งเสมอกัน
consecutive – following one after another in order ติดต่อกัน
anticipated – causing a feeling of excitement about something enjoyable that is going to happen soon รอคอยอย่างคาดหวัง
admission – the price to enter a place or event ค่าธรรมเนียมในการเข้า

Activity: What were they thinking?

Rain’s visit to Bangkok in 2007 was a huge event. One of the photos published in the Bangkok Post gave me an idea for a fun activity and I am reproducing it here.

Below is a photo that appeared on the front page of the Bangkok Post during the 2007 visit. It shows Rain and some of the large number of fans who showed up to see him at Siam Paragon the day before. Let's imagine what some of them were thinking. Look carefully at the photo and choose two, three or more of the people you see. Then imagine what was going through their minds at the time. 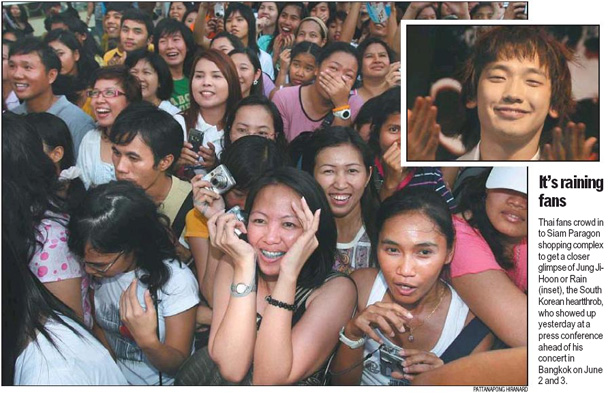 You can make this as fun or serious as you want. Here are some ideas to get you started. Look at the photo and decide who might be thinking the thoughts below: 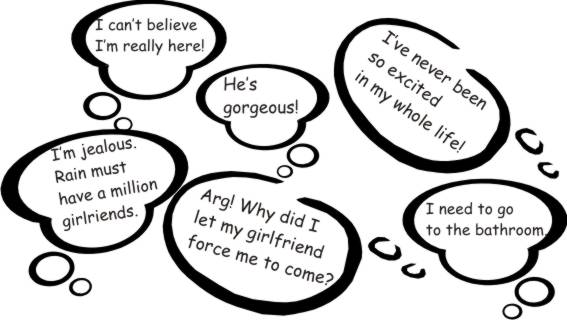 To do this activity, you really need to be able to explain to others which person you are talking about. You have to be able to describe where they are in the photos. Here are some ways to do this. Can you find the people I am talking about?

OK, do you have the idea? Now you try it. Make up some thoughts of your own as well.