At 48, farmer Songtham Stipa was a bit old to step into a Thai boxing ring, but the chance to earn a quick 400 baht persuaded him to take the challenge. It wasn’t worth it. 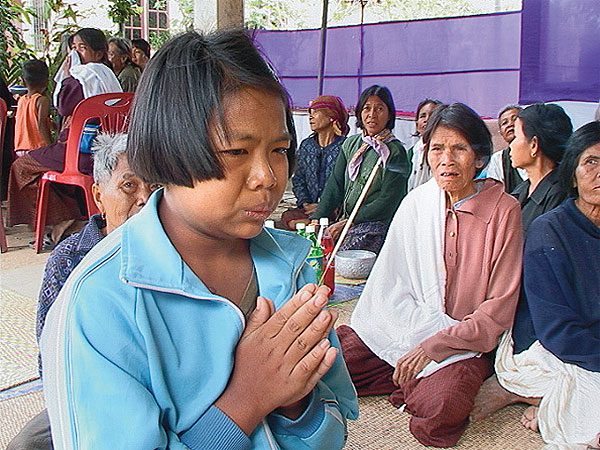 Thirteen-year-old Sidaporn Stipa pays her respects to her father, Songtham Stipa, who died from brain injuries sustained in a Muay Thai match in Surin on Saturday. NOPPARAT KINGKAEO

At 48, farmer Songtham Stipa was a bit old to step into a Thai boxing ring, but the chance to earn a quick 400 baht persuaded him to take the challenge.

After all, he had survived his two previous bouts and the money would be useful in helping to meet the expenses of his daughters' education and to care for his wife's elderly parents and disabled brother. Besides, his opponent was no youngster and was just an occasional boxer like himself.

His Muay Thai match was staged on Saturday in Surin as part of village celebrations marking the opening of a direct route to Ban Suan Na Kaew in Khewa Si Narin district.

The fight was brutal. Local media reported that Songtham struck his head violently after being thrown to the canvas in the third round by his opponent, Boontham Burana.

He continued fighting but was knocked down another five times. Eventually the two boxers fell to the mat together, but while Mr Boontham managed to stand up, Songtham lay motionless.

He did not regain consciousness and a doctor at Surin Hospital in Muang district pronounced him dead late on Saturday night. Severe brain trauma was given as the cause of death.

"He just kept getting up as if nothing had happened," Mr Boontham, 50, said.

"I feel very guilty for what happened. This will haunt me for the rest of my life."

"My father is not a serious boxer, but he dared to box for just 400 baht," she said, as she fought back tears.

Social Development and Human Security Minister Issara Somchai yesterday told officials to give financial assistance to the family in both the short and long term, especially to provide for his two daughters' education, for which Songtham died.