China is allowing Thailand to keep Lin Ping for two more years, a story I and many others missed last week. 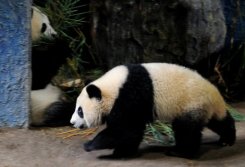 Linping (R) walks past her mother Lin Hui (L) in an enclosure at Chiang Mai zoo.

Here is a big story I completely missed last week. I wonder if you did too.

China is extending the period of time the hugely popular giant panda cub Lin Ping will be allowed to stay in Thailand.

Lin Ping, who is one year and 10 months old, is the first giant panda cub to be born in Thailand, following years of artificial insemination and efforts to encourage her parents to mate at Chiang Mai Zoo.

China provided Lin Ping's parents on a 10-year loan in 2003. Lin Ping also officially belongs to China and was on an initial two-year loan that was due to expire on her second birthday in May.

Lin Ping is a national star in Thailand. A live 24-hour "Panda Channel" follows her every move, while a competition to name her in 2009 attracted 22 million entries.

Her name means "forest of ice" in Chinese and is based on her mother's name Lin Hui (beautiful forest) and the name of the Ping River in Chiang Mai.

Adapted from an AFP story in last Friday's Bangkok Post.

enclosure – a piece of land that is surrounded by a fence or wall and is used for a particular purpose สังเวียน, คอก, วงล้อม
extend – to make a period of time longer  ขยายออกไป
huge – very large ใหญ่โต
popular – a situation in which someone or something is liked by many people เป็นที่นิยม, เป็นที่ชื่นชอบ
artificial insemination – the process of making a woman or female animal pregnant by an artificial method of putting male sperm inside her, and not by sexual activity การผสมเทียม
effort – an attempt to do something ความพยายาม
encourage – to cause someone to want to do something กระตุ้น ให้การสนับสนุน
mate – to have sex in order to produce young ผสมพันธุ์
loan – the act of lending something การให้ยืม
initial – early; first  เบื้องต้น
due – expected to happen or should happen มีกำหนด
expire – to come to an end or stop being in use หมดอายุ
parliament – a country's law-making body รัฐสภา
live – happening now, i.e., not recorded earlier ถ่ายทอดสด
competition – an organised event in which people try to win prizes การแข่งขัน
attract – to cause someone to be interested in something ดึงดูดความสนใจ
entry – the act of taking part in a competition, race,