It may be a political party, but the New Politics Party is apparently going to stay out of the next election. 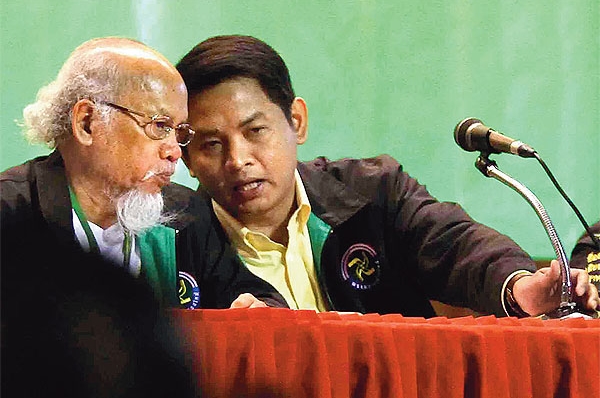 As leader of a political party, Somsak Kosaisuk naturally feels his group should be fielding candidates and fighting for seats in parliament in the upcoming general election.

Yesterday, he reportedly said there was no use in forming a political party in the first place if it would not select any candidates to take part in the election.

His New Politics Party (NPP) is not just any political party, however. It was set up as the political arm of the People's Alliance for Democracy (PAD) which is leading a boycott of the elections.

It became very clear from yesterday’s party assembly that the party members are in favour of the boycott.

More than 1,000 NPP members attended the meeting where most voted in favour of the "no-vote" campaign. They demanded the party follow the PAD's call for the NPP not to field candidates in the election.

There were some awkward moments during the the meeting as several members were frustrated with the party's executive board when they did not make their stance clear.

Boos were heard intermittently and members walked out of the meeting in protest. They later agreed to return after key NPP figures asked them to help promote a good image of the party.

Mr Somsak said at the sidelines of the meeting most NPP members wanted the party to boycott the election.

However, the right to decide whether to field any candidate, he said, belonged to the party's executive board, not the members, according to regulations on the establishment of a political party.

But Mr Somsak insisted the opinions of the NPP members would be taken into account at the executive board meeting.

NPP Secretary-General Suriyasai Katasila told the Bangkok Post the board meeting would definitely pass a resolution in favour of the "no candidate" consensus because opinions of the party's majority members were to be treated as a top priority.

Adapted from a story in today's Bangkok Post by Supoj Wancharoen.

acting – doing the work of the usual person in a particular job while they are not there, or until a new person starts ที่รักษาการแทน
annual – happening once a year ประจำปี
assembly – a group of people who gather in order to discuss issues and make decisions การชุมนุม, การประชุม
naturally – in a way that you would expect  แน่นอน, อย่างที่คาดไว้
field – to provide a candidate to represent your party in an election ส่งคนลงสมัคร
candidate – a person who is trying to be elected ผู้สมัครรับเลือกตั้ง
upcoming – happening soon; available soon ซึ่งกำลังจะเกิดขึ้น, ซึ่งกำลังจะมา
reportedly – as reported (often used for showing that you are not certain that something you are reporting is true) ตามที่รายงาน
select – to choose  คัดเลือก
arm – a part of an organisation that deals with a particular subject or activity หน่วยงาน
People’s Alliance for Democracy – the union of several groups protesting against the past government and which staged large protests against the Thaksin government as well พันธมิตรประชาชนเพื่อประชาธิปไตย
boycott – a refusal to take part in an activity or to buy a product as a way of expressing strong disapproval การคว่ำบาตร
in favour of – supporting a person or an idea, proposal etc that you believe is right สนับสนุน
campaign – a series of actions intended to produce political or social change การรณรงค์
demand – to ask for something very firmly เรียกร้อง, ต้องการ
awkward – difficult to deal with; causing problems  กระอักกระอ่วน
frustrated – feeling annoyed and impatient because you are prevented from achieving something ผิดหวัง,ท้อแท้ใจมาก
board – a group of people who have the responsibility of managing important business or government activities คณะกรรมการ
stance – an attitude or view about an issue that you state clearly; position จุดยืน
boos – expressions of strong disapproval or disagreement  คำอุทานแสดงการเหยียดหยามการไม่เห็นด้วย, โห่ฮิ้ว
intermittent – stopping and starting often over a period of time, but not regularly เป็นพักๆ, เป็นช่วงๆ, ไม่ต่อเนื่อง
protest – a strong complaint or disagreement การประท้วง
figure – someone who is important in some way บุคคลสำคัญ
image – an opinion that people have about someone or something ภาพลักษณ์
on the sidelines – outside of a event, i.e., not an actual part of the event
regulation – an official rule that controls the way that things are done กฎระเบียบ
establishment – the process of starting or creating something การสถาปนา, การก่อตั้ง, การจัดตั้ง
insist – to say very firmly that something must happen or must be done ยืนกราน
take into account – to consider; to think carefully about the various factors involved before making a decision or developing an opinion พิจารณา, คิดอย่างละเอียด
resolution – an official decision that is made after a group or organisation have voted มติ
consensus – a generally accepted opinion or decision among a group of people ความคิดเห็นของคนส่วนใหญ่
majority – more than half of the people in a group ส่วนมาก
priority – something important that needs to be done first or needs more attention than anything else สิ่งที่สำคัญที่สุดเป็นอันดับแรก