On our Minnesota holiday, my family and I have had to endure the hottest days of the year – hotter than Bangkok – and a state government shutdown. That ended on Thursday. 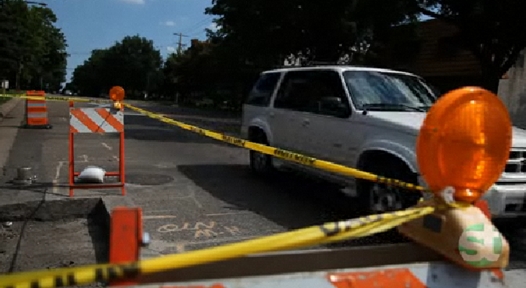 Road repair sites are slowly coming back to life as the Minnesota state government reopens.

Note: My family and I are in Minnesota for three weeks. Not only have we had to endure the hottest days of the year – hotter than Bangkok – but the state government was also shut down. That ended on Thursday.

Minnesota lawmakers have finally agreed on a budget deal that ended a three-week state government shutdown and things are slowly – very slowly – returning to normal.

“Like a rusted, frozen-up wheel that just got a shot of lubricant, Minnesota's state government is starting to get back to business.

“About 22,000 state employees, out of work for 20 days, started reporting back to work Thursday, beginning at 6 a.m. or at the start of their usual shifts.

“For the public, services and amenities are starting to reopen too. The Department of Driver and Vehicle Services are processing driver's licenses, vehicle registrations and drivers tests.

“Some state parks were open for day use by Friday, others by the weekend.

“Minnesotans who are feeling lucky can buy state lottery tickets .”

For many, the service most missed during the shutdown was the issuing of drivers licenses and permits. This was especially true of young people seeking their first permits to drive.

Sixteen-year-old Alexis Pratley who got a new car for her birthday, failed her test the day before the government closed and had to wait impatiently until yesterday for another try. She passed.

Since the new budget is a compromise deal that no one likes, people are already thinking ahead to June 30, 2013 when it expires. Will there be another shutdown then?

Some lawmakers are considering ways to prevent that from happening. One idea is to pass a law that would keep state government operating at existing funding levels even if legislators fail to agree on a new budget. There are likely to be many more ideas as well.

repair – to fix something that is broken or damaged ซ่อมบำรุง
site – a place where something is located  สถานที่
endure – to suffer something difficult, unpleasant or painful อดทน
budget – an amount of money able to be spent on something งบประมาณ
deal – a formal agreement, especially in business or politics การตกลงซื้อขาย, ข้อตกลง, การซื้อขาย
normal – typical, usual or ordinary; what you would expect ภาวะปกติ
rusted – damaged by rust (a rough red substance), or to make metal develop rust  เป็นสนิม
lubricant – a substance that you on the parts of a machine that move to make them move more smoothly น้ำมันหล่อลื่น
employee – someone who is paid regularly to work for a person or an organisation ลูกจ้าง
shift – a period of work time in a factory, hospital or other place where some people work during the day and some work at night เวร, กะ หรือระยะเวลาทำงานเป็นช่วงๆ,
the public – people in general ประชาชน, สาธารณชน, มหาชน
amenities – features that makes a place pleasant, comfortable or easy to live in สิ่งอำนวยความสะดวก
licence – an official document that gives someone permission to do or use something ใบอนุญาต
registration – the process of recording names or information on an official list การขึ้นทะเบียน, การลงทะเบียน
issue – to give or provide something official แจกจ่าย
permit – an official document that gives you permission to do something ใบอนุญาต
impatient – wanting something to happen as soon as possible ใจร้อน
compromise – a way of solving a problem or ending an argument in which both people or groups accept that they cannot have everything they want ประนีประนอม
expire – to come to an end or stop being in use หมดอายุ
prevent – to stop somebody from doing something; to stop something from happening  ขัดขวาง, กัน, กีดขวาง
existing – used now ที่มีอยู่
funding – money given for a particular purpose เงินสนับสนุน
level – the amount of something that exists in a particular situation at a particular time  ระดับ
legislator – a lawmaker; someone who has the power and authority to create new laws สมาชิกของสภานิติบัญญัติ