A 61-year-old man gets a long jail sentence for sending four text messages considered offensive to HM the Queen. 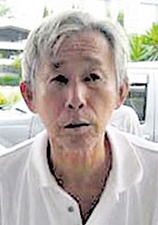 The floods kept 61-year-old Ampon Tangnoppakul out of the Criminal Court yesterday, but the reading of the verdict went ahead anyway, relayed to him through a video link.

The sound was not very clear, so a prison official at the Bangkok Remand Prison where he was being held, asked the court officers by phone to clarify the court’s decision.

"The uncle faces 20 years in jail," was the reply.

Uncle SMS, as Mr Ampon has become known, was yesterday convicted for sending four text messages to the personal secretary of then prime minister Abhisit Vejjajiva in May last year with content disparaging Her Majesty the Queen.

The court found him guilty on four counts under two laws – Section 112 of the Criminal Procedure Code, widely known as the lese majeste law, and Section 14 of the Computer Crime Act.

Mr Ampon, who had denied all charges, was sentenced to five years in prison on each count.

Presiding Judge Chanathip Muanphawong said in his verdict that prosecutors had convincingly demonstrated that Mr Ampon sent the messages.

He brushed aside the defendant’s claims that the he was a victim of forgery and that he didn’t even know how to send text messages, saying no proof was given.

After the verdict was read, Mr Ampon reportedly wept, surrounded by his daughters, granddaughters, and a daughter-in-law as well as activists campaigning for reform of article 112.

Ms Rosamalin, Mr Ampon's wife, said the family was most concerned about his mental fatigue and despondency.

"His strength is almost gone already. With the harsh sentence at his age, we just want to plead for bail [to appeal the verdict] so that we can get treatment for his worsening oral cancer symptoms."

His defence lawyer and his family discussed how they would proceed: to lodge an appeal or work towards being granted a royal pardon.

Adapted from a story in today's Bangkk Post by Achara Ashayagachat. You can read the original story here: http://bit.ly/uJee24

Criminal Court – a court which hears criminal cases, i.e., cases where people are accused of breaking a law and where punishment involves going to jail. ศาลอาญา
verdict – a decision by a court of law คำพิพากษา
relay – to pass something on (information, money, etc.) from one person or place to another ส่งผ่าน
remand prison – a place where people are kept while they wait for the date of their trial สถานที่ขังระหว่างรอการพิจารณาคดี
clarify – to make clear ทำให้ชัดแจ้ง
convicted – having been proven guilty of a crime by a court of law ได้รับการพิสูจน์ว่ามีความผิดจริง
content – the subject, ideas, or story that a piece of writing or a radio or television programme deals with เนื้อหา,สาระ
disparaging – to suggest that somebody/something is not important or valuable  ที่ดูถูก, ที่เหยียดหยาม, ที่สบประมาท
found guilty – convicted; having been proven to have committed a crime by a court of law ได้รับการพิสูจน์ว่ามีความผิดจริง
Criminal Code – the systems of laws dealing with crimes and their punishment ประมวลกฎหมายอาญา
lese majeste – the crime of offending, threatening or showing disrespect for a member of the royal family หมิ่นพระบรมเดชานุภาพ
deny – to say that you did not do something that someone has accused you of doing ปฏิเสธ
charge – an official statement accusing someone of committing a crime ข้อหา
sentence – (of a court of law) to give a punishment ลงโทษ
prosecutor – a lawyer whose job is to prove in court that someone accused of a crime is guilty อัยการ
convincingly – in a way in which someone is able to make you believe that something is true or right อย่างโน้มน้าว
demonstrate – to show something clearly by giving proof or evidence  พิสูจน์, แสดงให้เห็นจริ
brush aside – to refuse to accept that something is true ไม่เชื่อ, ไม่ยอมรับ
claim – saying that something is true although it has not been proved and other people may not believe it ข้ออ้าง ข้อกล่าวหา
defendant – someone who has been accused of a crime and is on trial จำเลย
victim – someone who has been harmed, injured or killed as the result of a crime เหยื่อผู้เคราะห์ร้าย
forgery – the crime of making illegal copies of something valuable, especially in order to earn money การปลอมแปลงเอกสาร
proof – information, documents, etc. that show that something is true  การพิสูจน์
wept (past of weep) – cried because of being unhappy or having some other strong emotion ร้องไห้
surrounded – having something completely around all sides ถูกล้อมรอบ
daughter-in-law – the wife of your son ลูกสะใภ้
activist – someone who takes part in activities that are intended to achieve political or social change, especially someone who is a member of an organisation นักกิจกรรม
campaign – to try to achieve political or social change by persuading other people or the government to do something การรณรงค์
reform – to make a change that is intended to correct a situation that is wrong or unfair แก้ไข ปฏิรูป
concerned – worried about something   มีความกังวล
mental – connected with or happening in the mind; involving the process of thinking เกี่ยวกับจิตใจ
fatigue – the condition of being very tired, both physically and mentally เหน็ดเหนื่อย
despondent – very unhappy because you do not believe that an unpleasant situation will improve อย่างหมดหวัง
harsh – strict, unkind and often unfair อย่างรุนแรง
plead – to ask for something in an emotional way ขอร้อง, วิงวอน
bail – money that is given to a court when someone is allowed to stay out of prison until their trial. If they do not return for the trial, the court keeps the money  เงินประกัน; การประกันตัว
lodge – to formally make something such as a complaint or a claim  ยื่นคำร้อง ยื่นฟ้องต่อ
appeal – to make a request that a court change a decision of a lower court ยื่นอุทธรณ์
treatment – the process of providing medical care การรักษา
oral – connected with the mouth  เกี่ยวกับปาก
cancer – a serious disease in which growths of cells, also called cancers, form in the body and kill normal body  cells. The disease often causes death มะเร็ง
symptom – a sign that someone has an illness อาการ
defence lawyer – a lawyer whose job is to prove in court that a person did not commit a crime  ทนายจำเลย
proceed – to carry out an activity ดำเนินการ
grant – to officially give something  ให้
pardon– an official decision to forgive someone for  committing a crime and to free them from full or further punishment การอภัยโทษ