Many people have been surprised – even shocked – to learn that among the 26,000 prison inmates receiving royal pardons this year are four of the country’s most notorious murderers. 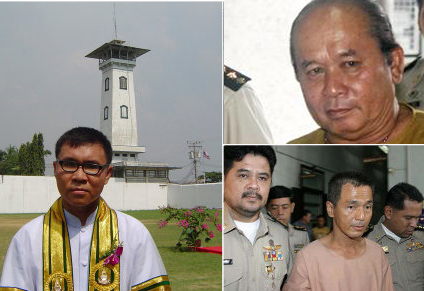 Many people have been surprised – even shocked – to learn that among the 26,000 prison inmates receiving royal pardons this year are four of the country’s most notorious murderers.

It is important to remember, however, that a royal pardon does not always guarantee release from prison. Of the four, only one will be walking free this year. The rest have had their sentences commuted, but still could face many more years in jail.

Serm Sakhonrat, a former medical student, now 35-years old, was given a life sentence after he was convicted of shooting Jenjira Ploy-angoonsri, also a medical student, before cutting her body up and dumping parts of it in the Bang Pakong River. His jail term has been commuted five times since 2004 and the latest royal pardon further reduces it to eight years. Because his time behind bars will reach eight years on Dec 18, he is among the inmates who are entitled to the release, Corrections Department chief Suchat Wongananchai said.

Meanwhile, former gynaecologist Wisut Boonkasemsanti who killed his wife and dissected her body in 2001, has to serve a further 21 years in prison following the royal pardon. The former doctor at Chulalongkorn University, who was found guilty of killing Phassaporn Boonkasemsanti, a doctor at Burachat Chaiyakorn hospital, following their marital dispute, was initially sentenced to death.

However, in 2007, his penalty was commuted by the royal pardon to a life sentence. His terms have been further reduced by pardons in 2010 and 2011.

Maj Chalermchai Matchaklam who was involved in the killing of a Yasothon governor in 2001, also receives a similarly reduced penalty. His death sentence was commuted to life by a royal pardon in 2007.

With two following royal pardons, his jail terms were reduced to 50 years in 2010 and they are further slashed this year by 13 years.

The final case involves former police lieutenant general Chalor Kerdthes who was involved in the murder of two family members of a gems trader concerning jewellery stolen from the Saudi palace in 1994.

Chalor was initially sentenced to death. His penalty was commuted to life by a royal pardon last year. Following this year's pardon, he will serve 50 years.

notorious – famous for something bad ซึ่งมีชื่อเสียงในทางไม่ดี
murderer – a person who commits the crime of intentionally killing a person ฆาตกร
pardon– an official decision to forgive someone for  committing a crime and to free them from full or further punishment or to have their punishment reduced การอภัยโทษ
shocked – very surprised and upset ตกใจ
inmate – someone who is kept in a prison, mental hospital or other institution นักโทษ
guarantee – to be certain that something will happen รับรอง, รับประกัน
release – to allow someone to go free ปล่อยตัว
sentence – a punishment given by a court of law การตัดสินลงโทษ
term – a period of time for which something lasts; a fixed or limited time ระยะเวลาที่กำหนด
commute – to replace one punishment with another that is less severe  ลดโทษ (รุนแรงให้น้อยลง)
convict – to prove in a court of law that someone is guilty of a crime พิสูจน์ว่าผิดกฎหมาย
reduce – to make something smaller or less in amount, size, importance etc ลดลง
behind bars – in prison การจำคุก
entitled – having the right to have or do something  มีสิทธิโดยชอบ
Corrections Department – the government department in charge of running prisons กรมราชทัณฑ์
gynaecologist – a doctor who studies and treats the medical conditions and diseases of women  นรีแพทย์,แพทย์ผู้ชำนาญโรคสตรี
dissect – to cut up a dead person, animal or plant, usually in order to study it ชำแหละคน สัตว์หรือพืช
found guilty – convicted; having been proven to have committed a crime by a court of law ได้รับการพิสูจน์ว่ามีความผิดจริง
marital – connected with marriage or with the relationship between a husband and wife  เกี่ยวกับการแต่งงาน
dispute – a serious disagreement  ข้อโต้แย้ง
initially – at first ในเบื้องต้น
similar – like somebody/something but not exactly the same คล้ายกัน
penalty – a punishment, or the usual punishment, for doing something that is against a law โทษ
slash – to cut, especially by a large amount ตัด
gem – a jewel (= precious stone), especially when cut into a particular regular shape อัญมณี, เพชรพลอย
trader – someone who buys and sells things ผู้ค้า
jewellery – objects such as rings and necklaces that people wear as decoration เพชรพลอย,อัญมณี