Before he left, outgoing Education Minister Woravat Au-apinyakul introduced a project that requires Thai students to speak English at least one day a week. How is it working?

I just found out there is a video to accompany this story. In it, you will meet the class teacher – not a native speaker of English – and see how he teaches. You will also meet two students, one speaking in English, the other in Thai. 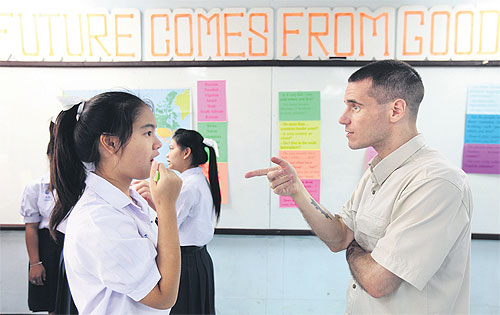 Most Thai students go through their day with little or no need to communicate in English.

The Thai language works very well – too well, according to some government and business leaders who are worried about how the country will compete in the Asean Economic Community scheduled to begin in 2015.

Outgoing Education Minister Woravat Au-apinyakul believed a bit of compulsion was necessary to get Thai students accustomed to using the English they learn in schools.

His English Speaking Year 2012 project requires that all schools nationwide stimulate their students and teachers to speak English at least one day a week.

Recently, the Bangkok Post’s Lamphai Intathep visited some Bangkok area schools to find out how the project was working.

"Yes, the project will enable us to speak more English, but we are still unsure whether our spoken English will improve," she said.

Ms Rossukhon said she has studied English for more than a decade but her speaking ability is still poor. That's because she rarely speaks.

She said her school had designated Wednesdays as the day on which students and teachers must speak English, but she wondered how many of them would be able to keep it up for a whole day.

"We are Thais. We seldom speak English in our daily lives," she said.

Panya Sukawanich, the school director, admitted the task ahead would be difficult.

"Many of our students have poor English. Some Mathayom 1 students still can't write A-Z. We have to teach them the fundamentals again and again," he said.

Horwang School in Chatuchak district has asked its students and teachers to speak English every Monday.

His school also hands out daily conversation brochures in English to students and teachers.

Interestingly, Mr Phacharapong thinks the English-speaking project doesn’t go far enough.  “I think students should also be learning the languages of neighbouring countries, such as Myanmese, Lao and Malay," he said.

Adapted from a story by Lamphai Intathep in today’s Bangkok Post. You can read the full story here: http://bit.ly/zo0IBK

mission – an important piece of work that a person or a group of people has been given to do ภาระกิจ หน้าที่
mission impossible – an important piece of work that seems like it can’t be done successfully, i.e., it’s impossible – also the name of famous TV series and a series of movies
compete – to try to be more successful or better than somebody else who is trying to do the same as you แข่งขัน
Asean Economic Community – a plan to create regional economic integration by 2015 ประชาคมอาเซียน
scheduled – planned to happen at a particular time or day ตามตารางเวลา
outgoing – leaving the position of responsibility mentioned ที่พ้นจากงานหรือความรับผิดชอบ
compulsion – strong pressure that makes somebody do something that they do not want to do การบีบบังคับ,แรงกดดัน
accustomed to – familiar with doing something เคยชินกับ
project – a planned piece of work that is designed to find information about something, to produce something new, or to improve something  โครงการ
nationwide – throughout a whole country  ทั่วทั้งประเทศ
stimulate – to make something develop or become more active; to encourage something  กระตุ้น, ส่งเสริม
mixed feelings – having several different emotions or feelings ความรู้สึกที่แตกต่างกัน
enable – to make someone able to do something, or to make something possible  ทำให้เป็นไปได้
improve – to get better  ดีขึ้น
decade – a period of ten years  ทศวรรษ
rarely – not happening often นานๆ ครั้ง, ไม่บ่อย
designated – formally chosen กำหนด, แต่งตั้ง
wonder – to think about something because you want to know more facts or details about it สงสัย
seldom – rarely นานๆ ครั้ง, ไม่ค่อยจะ
admit – to agree that something is true, especially when you are unhappy, sorry or surprised about it  ยอมรับ
task – something that you have to do หน้าที่; ภารกิจ
fundamentals – the most central and important parts of something, in this case, a language  หลัก, หลักภาษา
broadcast – a programme that can be seen or heard on television or radio แพร่ภาพกระจายเสียง
brochure – a small magazine or book containing pictures and information about something or advertising something แผ่นพับ
neighbouring – located near or next to a place or person  ติดกัน, ที่อยู่ใกล้เคียง, ที่ตั้งอยู่ใกล้เคียง