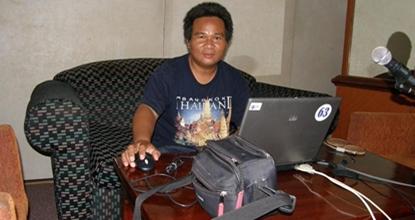 The first to post photos of Tuesday’s bombing on Sukhumvit Soi 71, motorcycle taxi driver, Dejchat Puangket, is now something of a celebrity. 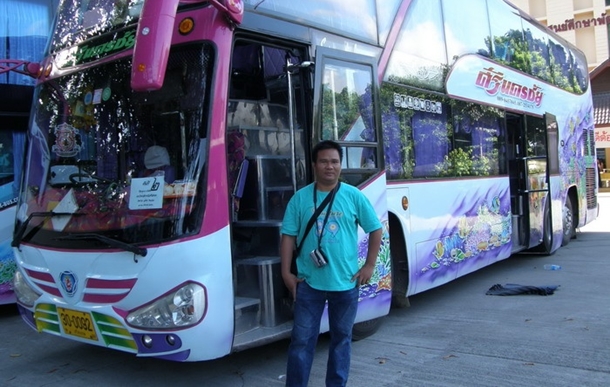 Motorcycle taxi driver Dejchat Puangket began posting stories and photos to the internet several years ago. Most were ordinary ones like this one, but then came the Sukhumvit Soi 71 bombing.

It is not surprising that one of the first people to get to the scene of Tuesday’s bombing on Sukhumvit Soi 71 was a Bangkok motorcycle taxi driver. They are everywhere.

What was unusual in this case is that this motorcycle taxi driver, Dejchat Puangket, a native of Srisaket, is also an experienced citizen journalist with his own internet blog and twitter account.

Armed with his android Imobile phone, he was the first to post news and, more importantly, photos of gravely wounded bomb suspect Saeid Moradi lying in debris with one of his legs missing and the other barely attached.

Dejchat’s  blog "motorcyrubjan" (http://www.oknation.net/blog/motorcyrubjang) quickly became the prime source for news of the bombing until the mainstream media starting filing reports – many based on his blog.

He soon started to receive tweets from journalists asking for the rights to use his images, which he readily allowed.

As a result he has become an instant celebrity, the subject of numerous interviews both in print and on local television.

"I did not witness the explosions myself, but I got there in time," Mr Dejchat told the Bangkok Post.

His win, or base, on Soi Pridi Banomyong 20 is a few blocks away from the crime scene on Soi 31.

Mr Dejchat's hectic schedule yesterday went like this – a request for an interview from Matichon Online, talking to Rawangpai Channel about being a multimedia journalist, going on air on Channel 9 with Khun Kanok (Ratwongsakul, of the Chao Khao Khon news programme) and then appearing on Blue Sky Channel at 6pm.

In between, he still managed to do his regular job as a motorcycle taxi driver, delivering documents, collecting checks and providing a messenger service.

post – to send information, in this case, to a website
citizen – someone who has the right to live permanently in a particular country พลเมือง
journalist – a person who writes news stories or articles for a newspaper or magazine or broadcasts them on radio or television ผู้สื่อข่าว
scene – site; a place where something happens or happened สถานที่เกิดเหตุ
native – someone who was born in a particular place ชาวพื้นเมือง
armed – knowing something or carrying something that you need in order to help you to perform a task
gravely – very serious; very dangerous อย่างวิกฤติ, อย่างร้ายแรง
wounded – injured, especially where your skin or flesh is damaged, usually seriously บาดเจ็บ
suspect – a person who is thought to have committed a crime ผู้ต้องสงสัย
debris – broken pieces that are left when something large has been destroyed  เศษ ซากปรักหักพัง  ซากสิ่งของที่ถูกทำลาย
barely – only just; almost not เกือบจะไม่
attached – fasten or joined together ติดกัน, ต่อ, ยึดติด
prime – main or most important ที่สำคัญที่สุด
source – a place where information comes from; someone who gives information แหล่งข่าว
mainstream media – traditional media such as newspapers and broadcasting media – newspapers, television, radio, etc. สื่อ
file a report – to send in a report, in this case to a news organisation ส่งข่าว
right – something that you are legally allowed to do or have สิทธิ
image – a photograph, painting, or other work of art that represents a person or thing รูปภาพ
readily – quickly and without difficulty อย่างไม่ลังเล, อย่างทันทีทันใด
allow – to let somebody/something do something; to let something happen or be done อนุญาต, ยอมรับ
instant – immediate ทันที
celebrity – someone who is famous คนมีชื่อเสียง
numerous – many มากมาย
interview – a meeting (often a public one) at which a journalist asks somebody questions in order to find out their opinions, experiences, etc. การสัมภาษณ์
local – in or related to the area that you live, or to the particular area that you are talking about  ท้องถิ่น
witness – to see something happen  เห็นเหตุการณ์
hectic - very busy and fast วุ่นวาย
schedule – a list showing the times at which particular events will happen  ตารางเวลา
multimedia – using video, sound, and other methods of communication, especially in computers ซึ่งใช้สื่อหลายชนิดในคอมพิวเตอร์
appear – to be seen ปรากฏ
manage – to succeed in doing something สำเร็จ,จัดการได้สำเร็จ, ทำได้สำเร็จ
regular – normal; following a pattern, especially with the same time and space in between each thing and the next ปกติ
document – a paper or set of papers with written or printed information, especially of an official type  เอกสาร
messenger – of a person who delivers information to people  ผู้ส่งสาส์น, ผู้ส่งข่าว