Yes, it is possible to forget more than 10 million baht in gold in a taxi. A goldshop owner did it last Wednesday evening, offered a big reward to get it back and luckily the gold was returned. 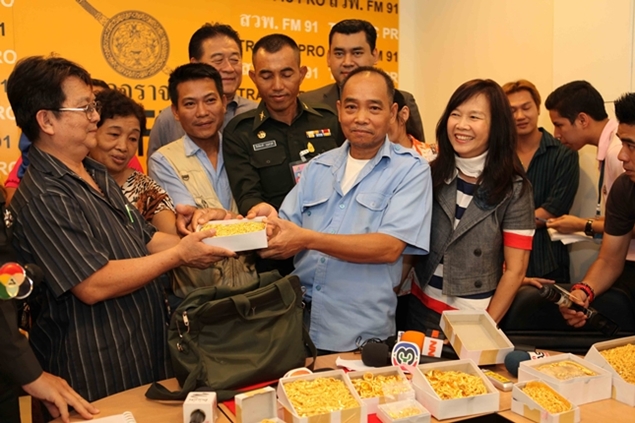 A taxi driver has returned 540 baht weight (8.2 kilogrammes) of gold worth more than 13 million baht to the passenger who mistakenly left it in his cab, police said on Friday.

Taxi driver Saksri Kesseekaew, 56, told police that he was worried after he discovered a bag full of gold jewellery left in his car by a passenger in Bangkok on Wednesday evening, said Communications Police Division chief Suchart Kangwarnjit.

Mr Saksri said there were 10 boxes of in the bag. He opened three of the boxes and found many gold ornaments inside, he said.

Roi Et resident Saksri said he asked his friend to call the Police Radio FM 91 station to broadcast details of the incident and help find the owner.

He also drove back to the areas where he had picked up and dropped off the passenger who left behind the gold.

Mr Saksri said he heard the about the owner from a relative who saw a news story on television yesterday.

The driver returned the gold to its owner at Police Radio FM 91 station.

The owner, gold dealer Akekarat Kanokwannakorn, said he had rewarded the driver with two gold necklaces, one of three baht weight and another of two baht, and 500,000 baht in cash.

ornament – a small attractive object used for decoration เครื่องประดับประดา
broadcast – to send out a programme on television or radio กระจายเสียง,กระจายข่าว
incident – something that happens, usually something bad เหตุการณ์
relative – a member of your family ญาติพี่น้อง
dealer – a person or company that buys and sells a particular product ผู้จำหน่าย
necklace – a piece of jewellery consisting of a chain, string of beads, etc. worn around the neck สร้อยคอ
cash – money เงินสด 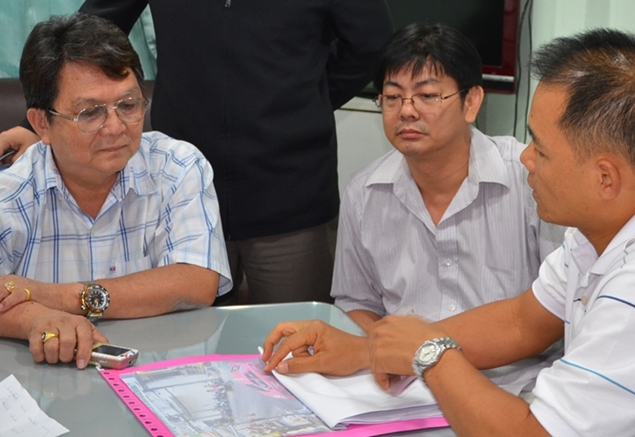 Akekarat Kanokwannakorn (left) asks Pathum Thani police for help after he left behind 400 baht-weight of gold in a taxi. PONGPAT WONGYALA

How can you forget gold worth more than 10 million baht in a Bangkok taxi?

Well, you have to be distracted, according Ekkarat Kanokwannakon, 60, a gold shop owner in Ubon Ratchathani.

He and his wife were visiting a relative in Pathum Thani and brought gold necklaces to be re-patterned in Bangkok. On Wednesday evening, the couple took a taxi from the SAB intersection near Yaowarat Road at around 6pm to Si Mum Muang wholesale market in Pathum Thani’s Lam Luk Ka district.

Mr Ekkarat said his wife was feeling unwell and had difficulty walking. Thus they took out only two of the three bags they had with them, only realising their mistake later.

CCTV footage showed them getting out of a pink taxi, but the cab’s registration number could not be seen. Mr Ekkarat said he could not remember the number, but he could remember the driver who had a dark complexion and was about 40 years old. 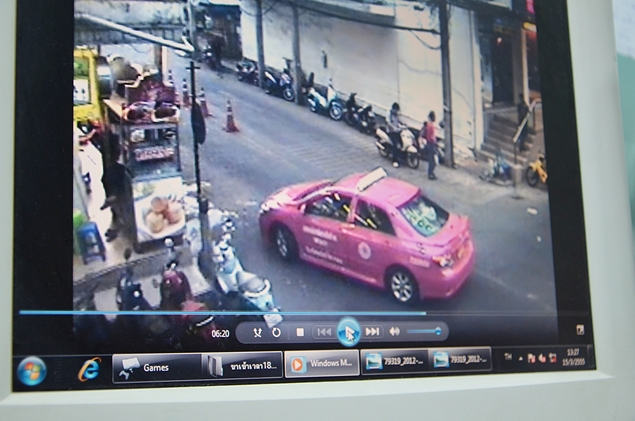 A security camera captures the taxi a gold shop owner was sitting in on March 14, 2012.

There is some hope that the driver will return the gold. Witnesses say the driver returned to the scene shortly afterwards, asking if anyone had forgotten a bag in his taxi.

The taxi driver also has another incentive to be a good citizen. Mr Ekkarat has offered him a 500,000 baht reward. Otherwise, he says, he will ask the police to arrest and prosecute the driver.

Adapted from a story in today’s Bangkok Post, online reports and TV reports.

couple – two people who are married or are involved in a romantic relationship คุ่รัก
distracted – having your attention taken away from something  ไขว้เขว เสียสมาธิ
relative – a member of your family ญาติพี่น้อง
necklace – a piece of jewellery consisting of a chain, string of beads, etc. worn around the neck สร้อยคอ
re-pattern – to change a pattern or design to a new one เปลี่ยนลาย
intersection – a place where roads, lines, etc., join or cross each other สี่แยก
wholesale – relating to the business of selling large quantities of goods, especially to people who are going to sell them in a shop ขายส่ง
unwell – ill/sick ไม่สบาย
realise – to know about ตระหนัก  รู้
CCTV footage – video from a CCTV camera, a security camera ภาพหรือหนังในเทปวิดีโอจากกล้องวงจรปิดเพื่อรักษาการความปลอดภัย
registration number – the number showing on a car license, a flat piece of metal or plastic on the front and back of a vehicle ป้ายทะเบียนรถยนต์
complexion – the natural colour and condition of the skin on a person's face ลักษณะผิว
security camera – a camera that is put in a place to constantly record what happens there  กล้องวงจรปิดเพื่อรักษาการความปลอดภัย
witness – a person who sees something happen  ผู้ที่เห็นเหตุการณ์
scene – site; a place where something happens or happened สถานที่เกิดเหตุ
incentive – something that makes you want to do something or work harder, because you know that you will benefit by doing this สิ่งกระตุ้น
good citizen – a citizen who follows the law and the proper rules of behaviour พลเมืองดี
otherwise – if not; used for saying that if one thing does not happen or is not true, something else will happen, usually something bad มิฉะนั้น, ไม่เช่นนั้น
arrest – (of the police) taking someone to a police station because they are believed to have committed a crime การจับกุม
prosecute – to officially accuse someone of a crime and ask a court of law to judge them ดำเนินคดี