“The man far away” gets some advice | Bangkok Post: learning

The House speaker’s casual talk with supporters about “the man far away” was supposed to be private, but people throughout the country are listening in through the Democrat Party’s TV channel. 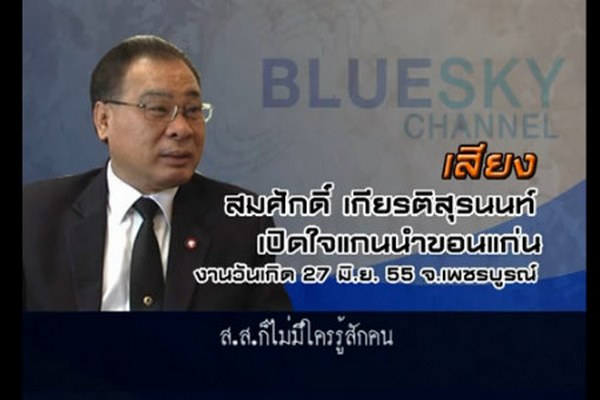 A photo of House Speaker Somsak Kiatsuranont is shown as his private remarks are broadcast to the general public though the Democrat Party's BlueSky channel.

“The man far away” gets some advice

About two weeks ago, Parliament President Somsak Kiatsuranont was in Phetchabun with a gathering of supporters. It was apparently his birthday and he was speaking casually and, it has turned out, not very carefully.

The House Speaker obviously didn’t realise his remarks were being recorded and they would soon be broadcast for everyone to hear over the Democrat Party’s own TV channel.

In the audio clip, Mr Somsak said he had talked often to the "person far away" and, with some difficultly, he had been able to convince him to agree not to push for quick passage of the constitutional amendment bill in parliament to avoid public opposition.

“When I asked him not to go ahead with the third reading [of the charter amendment bill] he wouldn't listen. He didn't yell but he didn't listen.

"So I told him that in all the time we've known each other, I have analysed various political issues. Was there any issue that didn't turn out the way I analysed? He became quiet and listened.”

Mr Somsak said he stressed to “the man far away” (clearly Thaksin Shinawatra) the importance of keeping the prime minister out of the political fight and not to rush the amendment process.

Mr Somsak said Mr Thaksin gave no response, but the next day he used Mr Somsak’s ideas as his own when he talked by telephone to Phue Thai leaders.

Mr Somsak also told his supporters that he had stressed to Mr Thaksin that the reconciliation process must be delayed.

"The next task is to avoid deliberating the reconciliation bill in parliament. I have repeated this 10,000 times to the person far away.

"I said to him he has endured so much for five years. What does another three to six months matter?”

Mr Somsak’s remarks are now the “talk of the town.” Pheu Thai spokesman Prompong Nopparit admitted the recording is genuine, but said it was a normal conversation over political matters between Mr Somsak and about 50 close aides.

private – intended for or involving a particular person or group of people, not for people in general ส่วนตัว
remark – something said คำพูด
broadcast – to send out a programme on television or radio กระจายเสียง,กระจายข่าว
audio – sound เสียง
general public – people in general or a large number of people in a society ประชาชน
gathering – a party or a meeting when many people come together as a group การรวมตัว, การประชุม
apparently – based only on what you have heard or think, not on what you are certain is true; seemingly ตามที่ได้รู้มา
casually – in a relaxed way and seemingly not worried about anything อย่าง ไม่เป็นทางการ, อย่างธรรมดา
turn out – to be discovered to be; to prove to be กลับกลายเป็น
House Speaker – the person who is in charge of most of the activities of the House of Representatives ประธานสภาผู้แทนราษฎร
obviously – clearly เห็นได้ชัด, อย่างชัดแจ้ง
realise – to know about รู้, ตระหนัก
convince – to make somebody/yourself believe that something is true; to persuade somebody to do something ทำให้เชื่อ, ทำให้แน่ใจ, ชักจูง
passage – the process of discussing/approving a bill in a parliament so that it can become law การผ่าน
constitution – the set of laws and basic principles that a country in governed by รัฐธรรมนูญ
amendment – a change made to a law or agreement, in this case, to the constitution การแก้ไขกฎหมาย ในที่นี้หมายถึงการแก้ไขรัฐธรรมนูญ
bill – a proposal for a law ร่างกฎหมาย
avoid – to try to prevent something from happening หลีกเลี่ยง
opposition – strong disagreement with a plan or policy ความขัดแย้ง
charter – a constitution รัฐธรรมนูญ
yell – to say something in a loud voice, or to make a loud noise because you are angry, afraid, excited, or in pain ตะโกน,ร้อง
analyse – to examine the nature or structure of something, especially by separating it into its parts, in order to understand or explain it วิเคราะห์
issue – a problem that needs to be considered ประเด็น
stress – to emphasise something; to say that something is important เน้นย้ำ
rush – to do something very quickly รีบเร่ง, วิ่ง
process – a series of actions that you take in order to achieve a result แนวทางปฏิบัติ, กระบวน, วิธีการ
response – an answer การตอบ
reconciliation – the process of creating a new and friendly relationship again with someone you argued with or fought with การปรองดอง
delay – to make something happen at a later time than originally planned or expected เลื่อน
task – something that you have to do หน้าที่; ภารกิจ
deliberate – to consider carefully, usually before making a decision พิจารณา, ตรึกตรอง
endure – to suffer something difficult or unpleasant in a patient way over a long period of time อดทนเพื่อให้ผ่านเวลาหรือเหตุการณ์ที่เลวร้าย
admit – to agree that something is true, especially when you are unhappy, sorry or surprised about it  ยอมรับ
genuine – real แท้
matter – a situation or subject which is being dealt with or considered เรื่อง, ภารกิจ, งาน
aide – someone whose job is to help another person in their work ผู้ช่วย

Somsak Kiatsuranont the man far away