Not long ago, taxi driver Wiset Bangwiset's English language vocabulary consisted of 'yes', no' and 'OK'. Now, thanks to a one-day course, he’s actually conversing with foreign passengers. 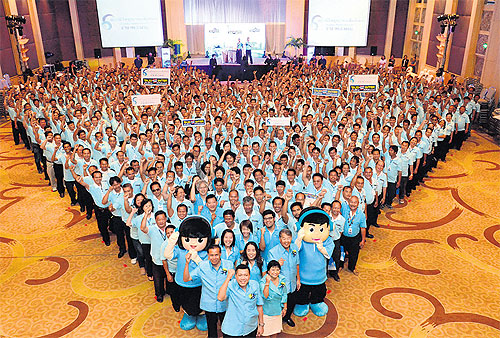 Not long ago, Wiset Bangwiset's English language vocabulary consisted of 'yes', no' and 'OK'.

The 38-year-old taxi driver admits he would often refuse to stop for foreigners because he could speak only Thai and he was nervous about communicating with them.

Now, after a special customer service and English-language training course offered by a local radio station, his doors are open to foreigners.

Mr Wiset, who has driven a taxi for 13 years, can engage in basic English conversations and has learned key phrases for his profession such as "it takes about one hour to get there", "it is faster to take the expressway but the toll fee is your expense", and "do you have smaller bills?".

The AEC’s arrival in 2015 will concern business people of all sizes, from major corporation heads down to individual taxi drivers.

Suwanachat Promchart, who has driven a taxi since he was 19, said good English ability is appreciated by foreigners and helps prevent possible problems such as dropping passengers at the wrong place.

"We are also taught to keep in mind that we are driving the taxi to make a living, not to stir up trouble," said the 35-year-old.

"I feel bad when I hear that some taxi drivers take advantage of foreign passengers, such as taking a longer route than necessary to bump up the fare. That makes us look bad and could lead to a decrease in passengers," he said.

Adapted from a story in today’s Bangkok Post by Lamphai Intathep. You can read the full story here: https://bit.ly/QdFVnF

participate – to take part in something เข้าร่วม
crash course – a course of study that is done over a very short time
consist of – to be made of or formed from something ประกอบด้วย
admit – to agree that something is true, especially when you are unhappy, sorry or surprised about it  ยอมรับ
refuse – to say you will not do something that someone has asked you to do ปฏิเสธ
nervous – anxious about something or afraid of something กระวนกระวาย
communicate – to express thoughts, feelings, or information to another person or animal, for example by speaking or writing ติดต่อสื่อสาร
local – in or related to the area that you live, or to the particular area that you are talking about  ท้องถิ่น
engage in – to take part in a particular activity  มีส่วนร่วมใน
key – very important ที่สำคัญ
phrase – a group of words which have a particular meaning when used together ถ้อยคำ, วลี
profession – a type of job that needs special training or skill อาชีพ
toll fee – money you need to pay to use a road like a tollway or some expressways ค่าธรรมเนียมใช้ถน
expense – money spent in doing a particular job, or for a particular purpose ค่าใช้จ่าย
bill – a banknote; paper money ธนบัตร
fellow – used for talking about people who are similar to you or are in the same situation  ซึ่งอยู่ในสภาพเดียวกัน
cabbie – a person whose job is to drive a taxi คนขับรถแท็กซี่
launch – to start something เริ่มต้น เริ่มทำ
tourist attraction – somewhere or something tourists can visit that is interesting or enjoyable แหล่งท่องเที่ยว
maintenance – the act of keeping something in good condition by checking or repairing it regularly การซ่อมบำรุง
practice – a way of doing something การปฏิบัติ
intended – planned; wanted to happen  ที่ได้วางแผนไว้ ที่ตั้งใจให้เกิดขึ้น
concern – to be involved in something, or affected by something เกี่ยวข้องกับ
corporation – a large business company บริษัท
individual – relating to or involving a single, separate person or thing แต่ละบุคคล
appreciate – to be grateful for something, i.e., feeling you want to thank someone for something they have done for you สำนึกในบุญคุณ
drop – to stop so that somebody can get out of a car, etc นำส่ง
make a living – to earn the money needed to pay for food, a place to live, clothing, etc ดำรงชีวิต, ครองชีพ
stir up – to make someone feel upset or angry ก่อให้เกิดความขุ่นใจ
take advantage – to use (often unfairly) for your own benefit เอาเปรียบ, หาประโยชน์ใส่ตัว
passenger – someone who travels in a motor vehicle, aircraft, train, or ship but is not the driver or one of the people who works on it  ผู้โดยสาร
route – the roads used to go from one place to another เส้นทาง
bump up – to increase or raise something  เพิ่ม
fare – the money that you pay for a journey ค่าโดยสาร
decrease – to become less ลดลง, น้อยลง