Thais celebrated Valentine's throughout the day yesterday in a wide variety of ways, but getting married – or trying to – seemed be the main focus of attention. 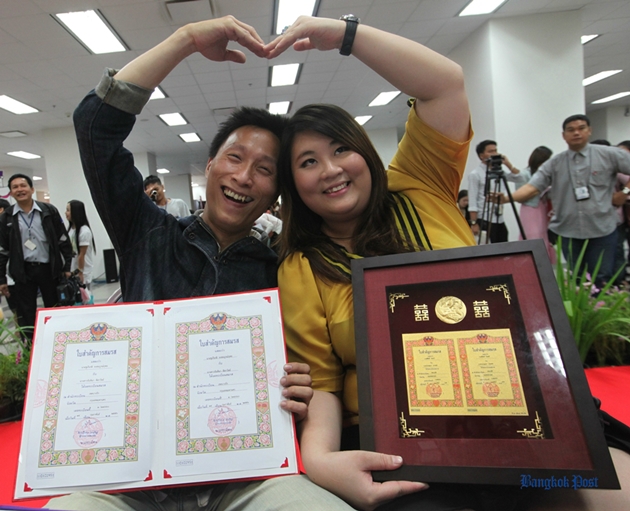 A gold wedding certificate for the winning couple. PAWAT LAOPAISARNTAKSIN

Thais celebrated Valentine's throughout the day yesterday in a wide variety of ways.

Once again, Bangkok’s Bang Rak district, the traditional district of love, was the early focus, as couples lined up at the district office well before it opened to enter a draw for a gold marriage certificate.

The first winners were Pol Lt Chukiat Chongsomboonkusol, 35, of the Metropolitan Police Bureau, and Chantima Tirawan, 21. The officer finished work around 2am Thursday and the couple waited outside the office from 5am, long before it opened.

Bang Rak district was expected to formalise the marriages of about 1,000 couples by day’s end.

One couple at Bang Rak who did not succeed in getting their marriage registered was Rungtiwa Tangkanopas and Panlawee Jongtangsatjatham. The problem? They are both women. Rungtiva Tangkanopas, left, and Panlavee Chongtangsajjatham apply for marriage registration in Bang Rak district, but they are refused as the law does not allow same sex marriage. PAWAT LAOPAISARNTAKSIN

District officials explained to them that they could not register the marriage because the law does not permit them to do so.

This came to as no surprise to the couple as they were clearly there in a show of support for a House of Representatives’ sponsored bill, now in the public-hearing stage, that would allow same-sex marriage.

“We understand officials here have no power to give us a marriage certificate," Ms Rungtiwa said. 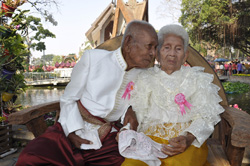 Sathien and Thong Sharekrathok, both 90, use Valentine’s Day this year to tie the knot in Nakhon Ratchasima. (Photo by Prasit Tangprasert)

Meanwhile, in Nakhon Ratchasima, 90-year-old Sathien Sharekrathok chose Valentine’s Day this year to marry Thong, who is also 90, after they had spent 23 years together in Chok Chai district and seen their six children by other marriages grow up and have their own families.

What's the secret of living together in old age?

“We live like friends, like brother and sister," the 90-year-old newly-wed husband said. "We always talk to each other, with no emotional upsets, and it always ends up my doing everything she wants," he laughed.

Police in Khon Kaen set up checkpoints in the city, but it was special this time as officers gave motorists who broke the road rules roses and motorcylists safety helmets, instead of tickets, to their great surprise.

They also warned them to drive safely and respect the law in the future. 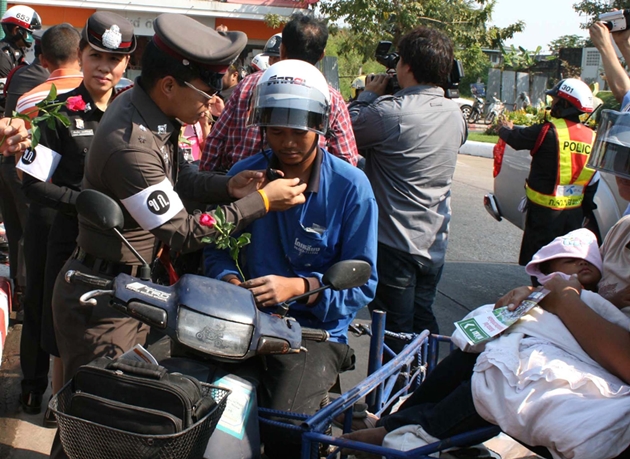 In Khonkaen, it was roses, not tickets, for motorists who broke traffic laws yesterday. JRAKKAPAN

Adapted from stories in today’s Bangkok Post and on bangkokpost.com

certificate – an official document or record stating that particular facts are true  หนังสือรับรอง
couple – two people who are married or are involved in a romantic relationship คู่แต่งงานกัน, คุ่รัก
celebrate – to do something enjoyable in order to show that an occasion or event is special ฉลอง
variety – many different types of things or people ความหลากหลาย
traditional – of a custom, a way of life or a way of doing things that has not changed for a long time เป็นประเพณี,  ตามธรรมเนียม
focus – the thing or person that people are most interested in  จุดสนใจ, จุดสำคัญ, จุดหลัก
draw – a way of choosing something such as a name or number by chance การจับฉลาก
metropolitan police – the police in responsible for a city ตำรวจนครบาล
formalise – to make an arrangement, a plan or a relationship official ทำให้เป็นทางการ
register – to put your name and other information on an official list in order to be allowed to do something ลงทะเบียน
permit – to allow someone to do something อนุญาต, อนุมัติ, ยินยอม
House of Representatives – the main lawmaking body in Thailand, consisting of 500 members สภาผู้แทนราษฎร
sponsor – to officially support a person, organization or activity สนับสนุน
bill – a written document containing a proposal for a new law ญัตติ, ร่างกฎหมาย
public hearing – an official meeting at which the facts about a situation, etc. are discussed with members of the public taking part ประชาพิจารณ์
stage – a particular point in time during a process or set of events ช่วงเวลา
tie the knot – to get married
meanwhile – at the same time ในเวลาเดียวกัน
emotional – related to strong feeling such as anger or love, or strong feelings in general  อารมณ์
upset – unhappy or disappointed because of something unpleasant that has happened  ว้าวุ่นใจ, กังวลใจ, ไม่สบายใจ, สับสน
checkpoint – a place where people have to stop so their vehicles and documents can be checked  ด่านตรวจ
special – not ordinary or usual; different from what is normal; more important than others; deserving or getting more attention than usual พิเศษ
helmet – a strong hard hat that covers and protects the head หมวกกันน็อก
ticket – an official notice that orders you to pay a fine because you have done something illegal while driving or parking your car ใบสั่ง สำหรับผู้กระทำผิดกฎจราจร
warn – to make someone aware of a possible problem or danger เตือน
respect – to accept the importance of something; to act according to a rule or law เคารพ