With no witnesses to the March 8 killing of a female elephant, police have seized 90 guns in their search for the killing weapon. 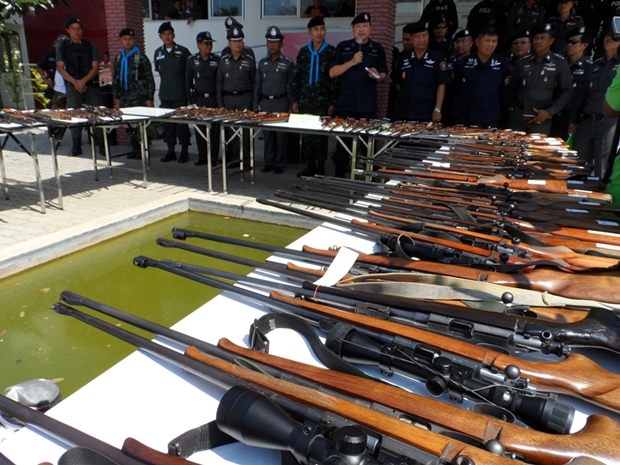 Almost 100 guns seized in simultaneous raids in Prachuap Khiri Khan and Phetchaburi provinces are put on display. The weapons were confiscated to see if they have any connection with the March 8 killing of a female elephant in Kaeng Krachan National Park. CHAIWAT SATYAEM

On March 8, a female elephant, aged between seven and 10 years old, was found dead near a creek in Kaeng Krachan National Park.

The elephant had several wounds, including four bullet holes in its hide.

Tests later revealed that the elephant was killed by a CZ .22LR rifle.

The killing created a public outcry and put police under pressure to find the culprits. With no witnesses to the killing, however, authorities are turning to science.

Yesterday, police seized 90 guns from local villagers to try to determine if one of them was used in the killing.

Armed with a court warrant, a 375-man combined force raided a total of 111 targets in two tambons in Hua Hin district of Prachuap Khiri Khan and two other tambons in Kang Krachan district of Phetchaburi. A total of 82 .22 rifles, eight long-barrel shotguns and 10 hunting axes were confiscated in the raids.

Pol Lt Gen Harnpol Nitwibul, commissioner of Police Region 7, said the seized CZ .22LR rifles would be tested to find whether they were used to kill the elephant.

Police suspect poachers killed the elephant and took away its calf for sale.

However, they have not ruled out other possibilities, such as the elephant being shot by farmers who were angry because the animal destroyed their crops.

seize – to take something using official power ยึด
simultaneous – happening at the same time ในเวลาเดียวกัน,ที่พร้อมกัน
raid – using force to enter a place suddenly in order to arrest people or search for something such as illegal weapons or drugs การเข้าตรวจค้น
on display – putting something in a particular place so that people can see it easily  โชว์, แสดง
confiscate – to officially remove someone’s possessions for legal reasons or as a punishment   ยึดทรัพย์
probe – an investigation การสอบสวน
creek – a narrow stream; a very small river  ลำธาร โกรกธารเล็กๆ
wound – an injury in which your skin or flesh is damaged บาดแผล
bullet – a small, metal object that is shot from a gun  กระสุนปืน
hide – an animal's skin หนังสัตว์
reveal – to show; to let something become known  เผยให้เห็น
rifle – a large gun with a long barrel that you hold against your shoulder to fire ปืนยาว, ปืนไรเฟิล
outcry – a strong expression of anger and disapproval about something, made by a group of people or by the public การคัดค้านอย่างรุนแรงจากผู้คน
put  under pressure – to try to make someone do something by forcing, threatening, or persuading them in a determined way; to cause someone to feel they must do something กดดันให้ทำ
culprit – someone who has done something wrong ผู้กระทำความผิด
witness – a person who sees something happen  ผู้ที่เห็นเหตุการณ์
authorities – people who have the power to make decisions or enforce the law เจ้าหน้าที่ผู้มีอำนาจ
local – in or related to the area that you live, or to the particular area that you are talking about  ท้องถิ่น
determine – to discover something by examining evidence to or calculate something กำหนด, ระบุ, แสดงผล
(search) warrant – an official document that allows the police to search a building หมายค้น
target – a person, business, building, area, etc., that someone intends to attack เป้าหมาย
barrel – the part of a gun that a bullet is fired through  ลำกล้องปืน
axe – a tool with a wooden handle and a heavy metal blade, used for chopping wood, cutting down trees, etc. ขวาน
commissioner – the head of a particular police force in some countries ผู้ตรวจการณ์
suspect – to believe that something is true, especially something bad  สงสัย
poacher – a person who illegally catches or kills an animal, bird, or fish on someone else’s property ผู้รุกล้ำ, ผู้บุกรุกล่าสัตว์หรือจับปลา
calf – a young cow or, in this case, a young elephant  ลูกวัว, ลูกช้าง
rule out – to stop considering something as a possibility ประกาศว่าเป็นสิ่งที่เป็นไปไม่ได้
crop – a plant grown for food, usually on a farm  พืชผล