Pui knew that plastic bag contained something unusual, so he brought it home and barked loudly to get attention. Now he is a local hero. 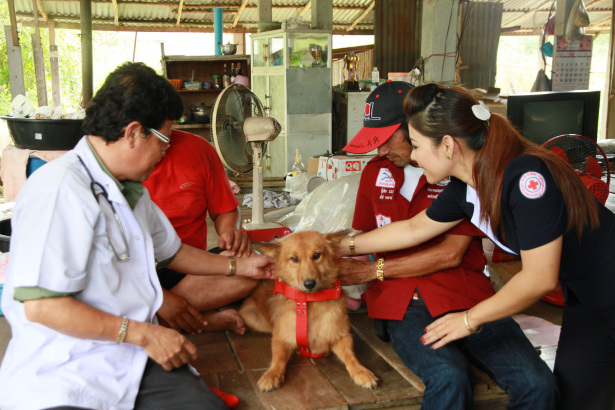 Pui with local Red Cross officials after receiving his awards, a leather collar and a medal. Post Today photo.

The Red Cross office in Tha Rua district has been approached by five families wanting to adopt the premature baby found by a dog on Monday.

Sasithorn Pinnikorn, the office chief, said among the families who contacted the office is an American married to a Thai woman.

In the meantime, she is being cared for in an incubator at Phra Nakhon Si Ayutthaya hospital in Muang district, after being transferred from Tha Rua hospital. 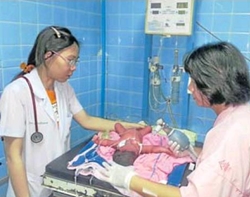 Pui likes to wander around his rural community in tambon Sala Loi in Tha Rua district of Ayutthaya looking for scraps of food to eat.

Yesterday, the male Thai Bangkaew dog was rummaging around a dump site when he found a white plastic bag with something unusual in it.

Pui carried the bag back to the home of his master Gumnerd Thongmak and barked loudly to get attention.

Mr Gumnerd’s niece, Sudarat, 12, said she went downstairs after hearing Pui barking and found the bag on the patio.

She opened it and was shocked to find a newborn baby inside.

Sudarat ran to get her mother. The baby was extremely small and clearly in a dangerously weak condition, so they rushed the baby to Tha Rua Hospital.

Hospital officials said the baby, a girl, weighs 2.2kg. They believed she was born prematurely, at around seven and a half months. She was later transferred to Phranakhon Sri Ayutthaya Hospital.

Meanwhile, Pui has become a local hero. Yesterday Tha Rua Red Cross officials awarded him a leather collar and a medal as a token of appreciation for his clever rescue.

Pui also received a free medical checkup from a local veterinarian and, best of all, plenty of delicious food. Pui should remain well-fed for some time as one local man gave Pui’s owner 10,000 baht for dog food supplies.

Adapted from a story in today’s Bangkok Post plus information from local Thai-language news sources. 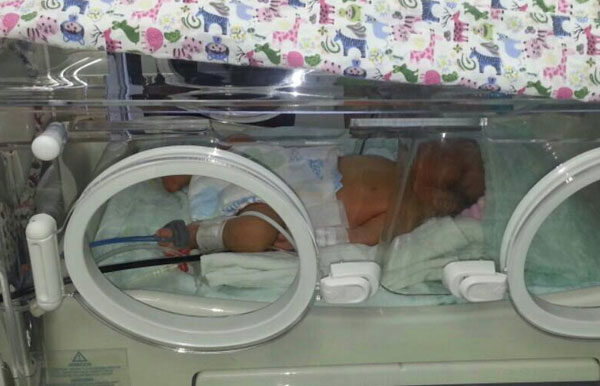 The newborn girl is being cared for in an incubator at Phra Nakhon Si Ayutthaya hospital after being found by a dog on Monday. SUNTHORN PONGPAO