A control system problem temporarily knocked Bangkok's crowded BTS system out of operation, but as of 11:00am it has reopened operations, shut again, and resumed again. 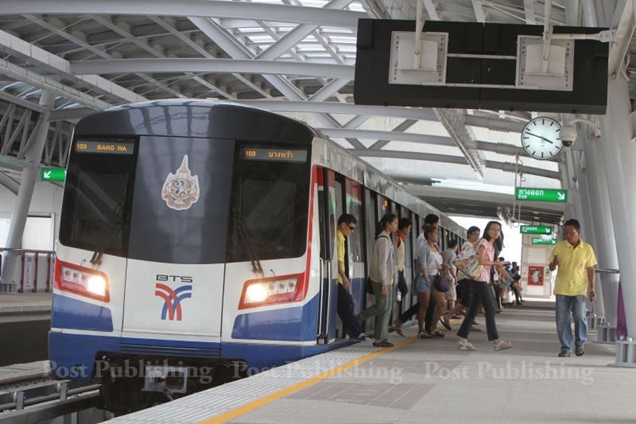 The BTS Skytrain was not running this morning at the new Bang Wa stationnor at any other station as problems with a control system halted service temporarily. Reports say that as of 11am, it is now back in operation. PORNPROM SATRABHAYA

Here's the latest on the BTS shutdown earlier today from our online team: 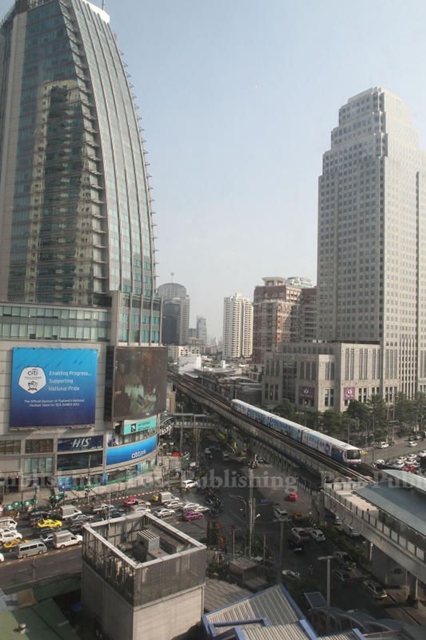 The testing of a new platform screen door caused an eight-hour failure of the BTS skytrain system that caused commuter chaos in Bangkok on Tuesday morning.

The test triggered a malfunction of the signals communication system, which controls the trains, leading to a total shutdown.

Anat Arbhabhirama, adviser to the board of director of Bangkok Mass Transit System which operates the BTS skytrain, told a press conference Tuesday afternoon that the testing of platform screen doors at stations early Tuesday early morning had caused the signal problem.

Mr Anat said tests on Silom line were completed. The company began testing the screen door system on the Sukhumvit line when the problem arose about 3am.

The problem caused the cancellation of all services from 6am, when trains normally begin running.

Bombardier Transportation Singals (Thailand) Co, which handles the service, was called into the fix the problem and full services resumed five hours late at 11am, he said.

However, there was another signals interruption between Chidlom and On Nut station about 1pm, causing the service between these two stations to be halted for about half an hour.

Mr Anat said Bombardier will check the signal system again after its daily service ends at midnight. All problems were expected to be ironed out before normal operations start at 6am Wednesday.

He said the company had lost about eight million baht in revenue because of the failure.

Oops. Another shut down, this one a short one and confined to the Sukhumvit line. Reports say BTS is now operating again.

Surprise! Social media users report the BTS is back in operation.

Social media users reporting seeing trains in motion on the Skytrain line although service has not yet begun. Spring News TV has just reported that the BTS has confirmed an afternoon restart. 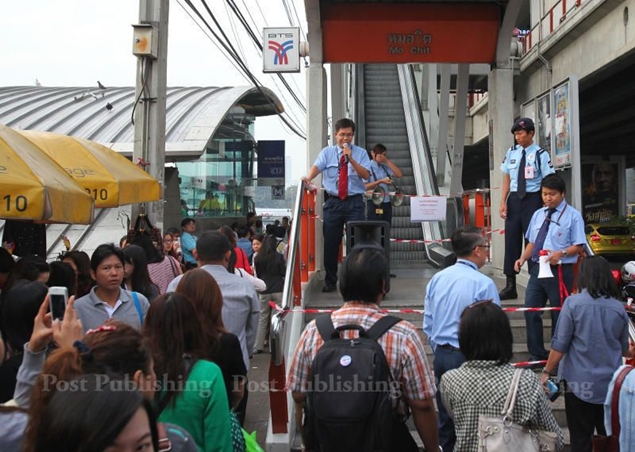 "We are very sorry, but BTS service has been temporarily halted. Please use alternative means of transportation." (Latest reports say the system has reopened.) PATTARAPONG CHATPATTARASILL

Currently both lines of Bangkok's BTS system are not in operation and passengers are being told to find alternative means of getting to their destinations. The problem, it appears, is in the control system. The company has apologised for the inconvenience and says urgent repairs are underway. The company is using all possible communication channels to notify customers of the problem, it said on its website.

As you would expect, there are already reports of heavy traffic on the roads and there are (false) rumours going around that the shutdown was caused by protesters trying to cause gridlock. Well-known Bangkok blogger Richard Barrow reported, however, that an BTS executive said the problem was caused by a radio transmitter failure in the signalling system. Barrow reports that the company is hoping for a noon reopening.

A BTS official has just told Thai PBS TV (9am) that the problem actually began at 3am this morning, during the testing of a new system. He said both BTS and foreign technical staff are working on the problem, but he could not say with certainty when the system would be up and running again. He hoped it would be this morning.

Bangkok's subway system is still operating, but some stations are very congested. The crowding at Chatuchak station is especially severe. The Transport Minister has requested additional trains be put in service as well as more buses. Interestingly, the MRT, Bangkok's subway service, had just reported an increase of 60 percent in passengers for the first 10 months of this year. Today, might be a record-breaker.

This was the first major breakdown in the system in 14 years. 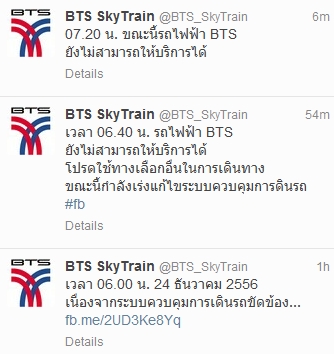 Twitter announcement from BTS on the temporary suspension of service.