2 die near Ratchaprasong PDRC rally site, 2 from the evening before at a rally in Trat. Injury toll from both now stands above 55. (Includes 2 videos) 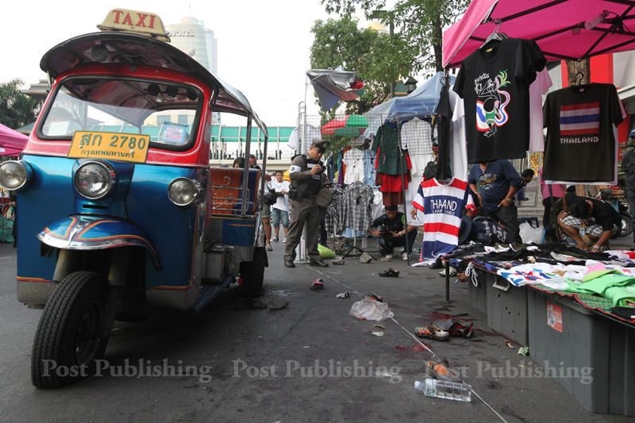 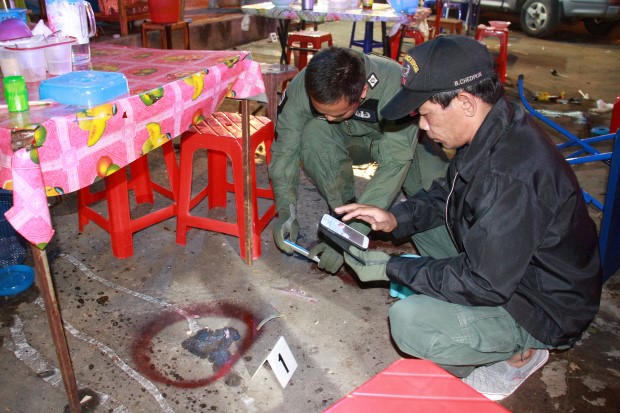 Police look for evidence at the noodle stall where bombs were thrown Saturday night near a PDRC rally. JAKKRIT WAEWKRAIHONG

The 6-year-old sister of the 4-year-old boy killed in the grenade attack near Big C Supercentre on Ratchaprasong Road has now died of her injuries, bringing the death toll in the incident to three. The injury toll now stands at 24. Children are among the most seriously injured. Meanwhile, another 5-year-old girl, Nattaya Rotsungnoen lies near death in a hospital in Rayong, a victim of the shooting and bombing incident near the PDRC stage in Trat. Doctors say her brain has basically stopped functioning. Her condition is deteriorating and she is being kept alive on a respirator. She was shot in the neck and the bullet had pierced her brain. (She was reported to have died earlier this morning, but she is apparently still on the respirator, but her blood pressure was reported dropping.)

From our online reporters

A 4-year-old boy and a woman, 40, were killed and 22 people were injured in an apparent M79 grenade attack on the anti-government rally near Big C Supercentre on Ratchaprasong Road on Sunday afternoon.

The Erawan Emergency Centre said the child was pronounced dead at Ramathobodi Hospital. The other victim, a 40-year-old woman, died at Phyathai 1 Hospital, it said.

Twenty-two others were injured in the incident, which took place at about 5pm in front of Bic G Super Centre, the centre said. 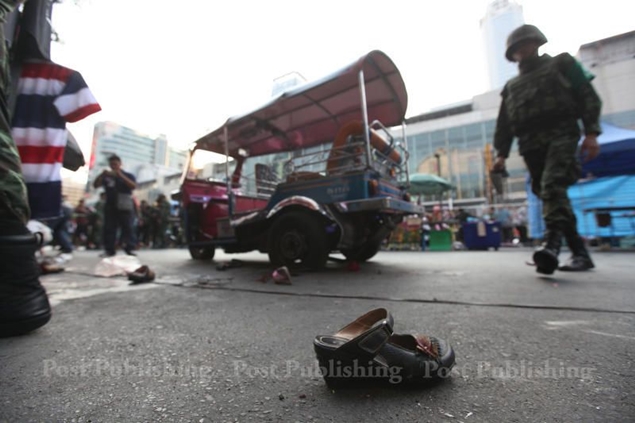 A victim's shoe remains behind at the bombing site. THITI WANNAMONTHA

The area is near a stage of the People's Democratic Reform Committee (PDRC) protest site at Ratchaprasong intersection.

Big C decided to close the store after the incident.

Police from an ordnance disposal team suspected the explosion was caused by an M79 grenade according to evidence found at the scene.

Police from Lumpini station and soldiers from the 1st Regiment who were setting up checkpoints in the area rushed to the scene and sealed off the area to search for clues.

The Ratchaprasong incident took place four and a half hours after an M79 grenade was found in a car park between the Civil and Appeals courts on Ratchadapisek Road at about 12.30pm Sunday.

Here are my early reports on the Trat bombing:

The number of injured has been revised downward to 34 with 29 of them still in hospital.

A surveillance video outside the Yingcharoen market captured footage of one of the vehicles, but police say it did not show the the attackers in action.

As usual, there has been a lot of confusion over reports of a bombing and shooting incident near the People's Democratic Reform Committee (PDRC) stage in Khao Saming district, Trat province.

Now some facts are starting to emerge.

The incident happened just after 9pm as some 500 people were listening to Pong Sarakham on the PDRC stage in Yingcharoen market when gunmen on two pickup trucks drove by.

The men in the first truck threw grenades at shops selling noodles and fried oysters next to the rally where about 20 people, including PDRC guards were sitting. 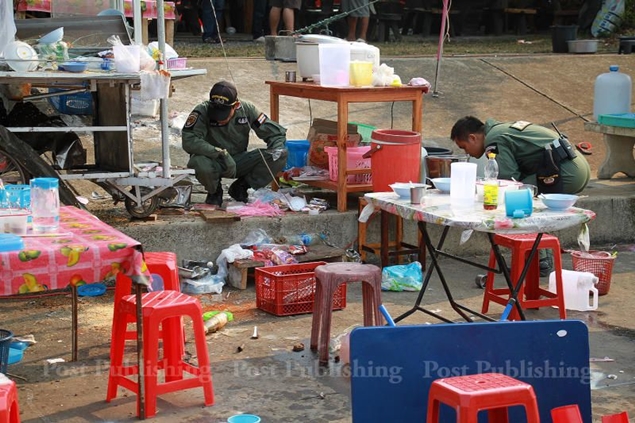 Those on the other truck fired indiscriminately at the noodle shop and then turned their guns to the stage.

At the moment, the death toll stands at one, with 35 injured, five seriously. The dead victim has been identified as five-year-old Lilaiwan Promchai who was playing near the noodle stall where her mother was washing dishes. She was apparently hit by bomb shrapnel in the head.

Another five-year-old girl is also in critical condition and has been transferred to a hospital in Rayong.

Since the violence took place next to the PDRC rally, suspicions are strong the motive was political, but it is too early to say that for sure.

Contains information from our online reporters