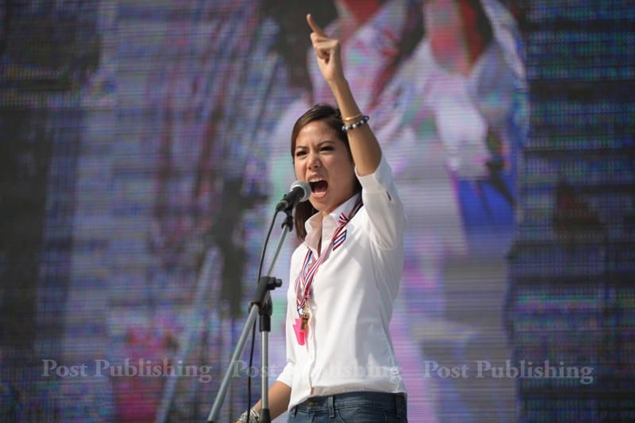 Despite being forced to change her surname from Bhirombhakdhi to her mother's maiden name, Kridakorn, Ms Chitpas continues to demonstrate against the Thaksin regime. SEKSAN ROJJANAMETAKUL

A few days ago, the Bangkok Post’s Chumporn Sangvilert and Nattawat Watanasuwan got a few minutes with one of the best known People's Democratic Reform Committee (PDRC) personalities, Chitpas Kridakorn, for a video interview in English.

Ms Chitpas, a member of one of Thailand’s richest families, the Bhirombhakdi family, recently changed her surname. She explains why in the interview and also tells us why she is involved in the protest movement.

Ms Chitpas was educated abroad and speaks English – British English – like a native speaker, but the interview was conducted near one of the PDRC’s rally sites, so there is background noise. Thus, I’m sure you will find the transcript helpful.

Right. Well, my name is Chitpas Kridakorn now. I’ve been involved with the PDRC for the last four months.

How did the protest begin?


When we first started four months ago, it was because the government was trying to push through and amnesty bill to whitewash all the corruption and the – and what happened back in – three years ago, so I think that’s how it all kind of started.


Well, the government needs to step down first of all. That’s what we’re asking for so we can have a neutral government to (unclear)…  so that we can form a People’s Assembly and reform this country. Well, I think, as of now, we are trying to put pressure on Yingluck and her government to resign.

Is the protest democratic?


We’re not enemies of democracy. We’re definitely not. We believe in true democracy but today that very such thing as a true democracy we don’t – the corruption, the vote-buying and every part of the corrupted election. That’s why corrupted politicians have entered into politics and really ruined this country, so that’s why we need a proper reform before we can have the next general election. That’s what we’re asking for.

What is your role in the protest?


Well, I think we’ve all got different roles to play, I guess. For me it’s been kind of visiting ministries, visiting civil servants, encouraging them to do the right thing and come out and stand by the people instead of serving this corrupted government.

Why did you change your last name?


I guess my family is….we believe in democracy, so everybody has their own choices to make and I thank, I’m thankful for my family to give me such freedom to be able to follow what I believe in and fight for the right cause. So, for me to change my surname, so that people who are actually in my family that are not involved will have no part in this movement. They don’t get blamed for it too. And I know it can be very aggressive, very tough….I mean, I can handle it. I just don’t want that pressure to be put on my family and I think by changing my last name, that might help a bit.

Did you really say to AFP, “..many Thai lack true knowledge of Democracy, especially rural people”?


Well, with that sentence, it was actually quite a long sentence and obviously with politics being this kind of brutal, every little detail is picked up and …falsely and misinforming the public about things to create further divisions between classes or between people who live in the city and people who live in the provinces…the opposition who wants to give you bad credit, obviously to try to find every single way to discredit you, but, in a way now, people know and see for themselves and Thailand has suffered so much and we’ve come so far to even think about turning back and I know that, for a fact, that….we’re winning.