Latest: Janie left for LA on Thursday. Earlier: Janie posts an instagram message. A photo of her appears on a plane. Actress Janie Tienphosuwan and Chonsawat "Ae" Asavahame are officially no longer a married couple. The divorce took place Tuesday afternoon in Samut Prakan 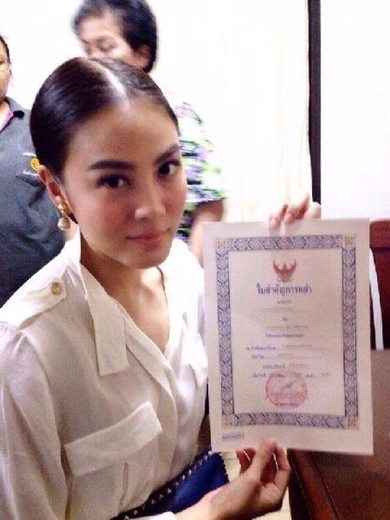 Janie Tienphosuwan shows the divorce certificate to the members of the media. Twitter photo

Finally, we now know that Janie did leave on schedule for Los Angeles early Thursday afternoon. A large media contingent was at the airport to cover her departure, but she escaped into a VIP room, leaving a friend to talk to them. Her friend said Jane was doing well and was not overly distressed.

And what about her other friend who claimed Janie actually left Thursday evening? Sorry, I mixed up the dates, she said.

The Thai language media is continuing its intense coverage of the unhappy end to the marriage between actress Janie Tienphosuwan and millionaire Chonsawat "Ae" Asavahame, chairman of the Samut Prakan Provincial Administration Organisation.

All major newspapers have coverage of yesterday's divorce proceedings in Samut Prakan. Matichon reports that the couple appeared not to speak to each other and they signed the divorce papers separately. Both left quickly without talking to the media.

ASTV Manager Online has posted a photo of Janie on an airplane standing next to a Thai Airways steward, indicating that she has indeed left the country earlier than her scheduled departure on July 31. The Daily News says she was on her way to Los Angeles. (Still waiting for confirmation on this.) 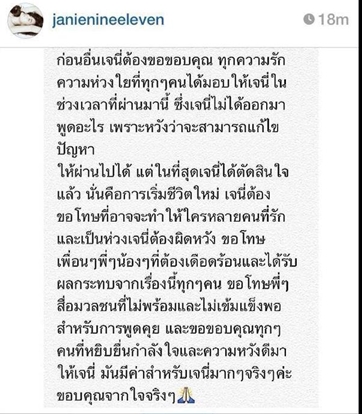 She thanked everyone for the concern they had shown over her situation. She said she had remained silent because she was hoping to solve her problem. Finally, however, she has resolved to start a new life. She apologised to the many people who she has disappointed and to the friends she has caused trouble for. She also apologised to the media for not being ready and strong enough to tell her story. She ended by thanking everyone who has given her moral support and good wishes. This has great value to her, she said

From our online reporters

He said Mr Chonsawat came with two friends while Ms Janie was accompanied by her mother and a lawyer.

"It didn't take long for them to sign the documents since they've made agreements in advance. The two sides went their separate ways after the signing," Mr Somchai said.

It is now not clear if Janie has left the country as reported by one of her close friends.

Post Today reports that a close friend of Janie has revealed that Janie has already left for the United States, having finished her work early. Her friend refused to talk about Janie's marriage or rumours that she had been physically abused.

Sources close to Actress Janie Tienphosuwan say she will not be holding a press conference today as rumoured, but she will be leaving for the United States on Thursday for a one-month stay.  (Khao Sod) 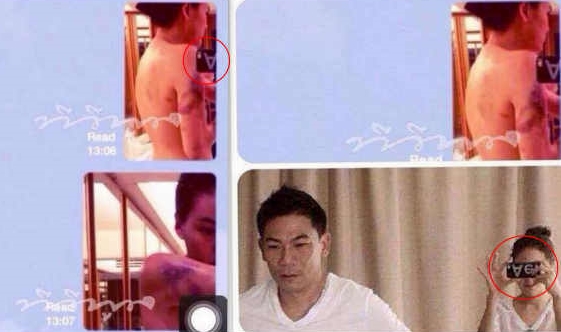 Some of the photos that have appeared in the media since Saturday.

Janie and "Ae" rumours become "talk of the town"

One of the big stories in the Thai-language media in recent days concerns the apparently stormy relationship between Actress Janie Tienphosuwan and husband Chonsawat "Ae" Asavahame, chairman of the Samut Prakan Provincial Administration Organisation.

As the TNN 24 entertainment reporters cautioned their audience a few days ago, everything is still rumour, but that doesn't stop a good story. 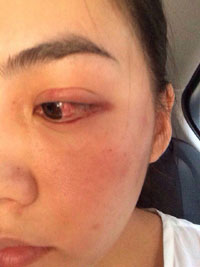 The couple made headlines again when pictures emerged of a brutally beaten woman who closely resembles the actress. The pictures of the woman started appearing in the media on Saturday. The woman had a bruised left eye and a large bruise on her upper right arm and back.

Media reports say Janie is likely to talk to the media tomorrow (Tuesday) and is planning a trip to the United States.

In her regular Sunday column, the Bangkok Post's own Mae Moo, had this to say about the relationship.

Actress Janie Tienphosuwan is dropping hints that her marriage to a millionaire businessman is over, cancelling her Facebook account (correction: Instagram account) and starting a new one in which she has posted the song, Begin Again.

Her new (instagram) account, named Janienineeleven, last week also carried the message: “How you see your future is much more important than what has happened in the past.”

Neither superstar Janie nor her husband, Chonsawat “Ae” Asavahame have gone before the media, despite claims their marriage ended amid a storm of acrimony.

Media reports say Ae, chairman of the Samut Prakan Provincial Administrative Organisation, has taken up with a young woman who helps him prepare for his weekend motor racing meets, while Janie is now seeing a tomboy businesswoman, Kalayada “Ju” Lohacharoenvanich.

Sources late last week said Janie is preparing to break her silence and plans a month-long trip overseas to recover from her ordeal. Ae has refused to comment on his marriage, saying his duties as an elected official are more important.

Information from our online reporters and Bangkok Post's Sunday column by Mae Moo.