His Majesty's doctors requested that the King not leave the hospital today for an audience at the Amarin Vinitchai Hall, dampening the morning events, but this evening's celebrations for His Majesty's 87th birthday are being carried out on a grand scale. 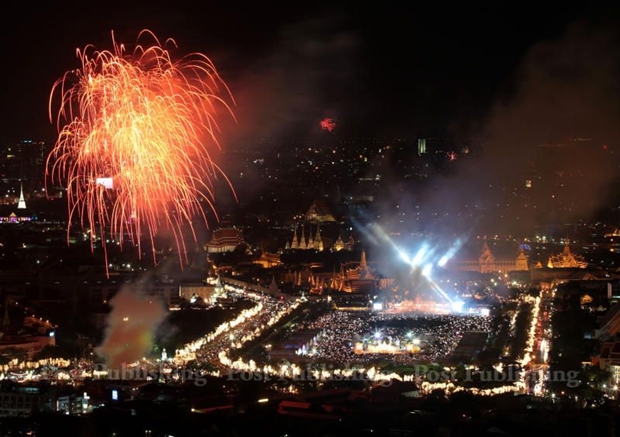 Fireworks filled there air at the conclusion of the candle-lighting ceremony in Sanam Luang. CHANAT KATANYU 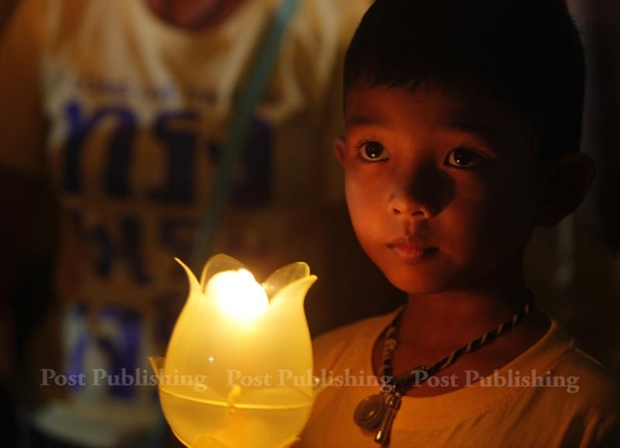 A young boy with his candle at Sanam Luang. PATTARAPONG CHATPATTARASILL.

Thais throughout the nation have joined together in massed celebrations, culminating in a splendid candle-lighting ceremony in honour of His Majesty the King's 87th birthday. Prime Minister Prayut Chan-o-cha presided over the main event at Sanam Luang but there were simultaneous ceremonies nationwide, including an emotional gathering at Siriraj Hospital where the King is recuperating from a recent illness. 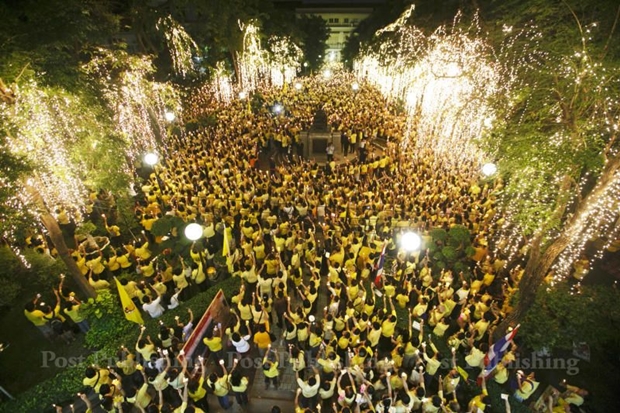 Part of the huge crowd at Siriraj Hospital. SEKSAN ROJJANAMETAKUL 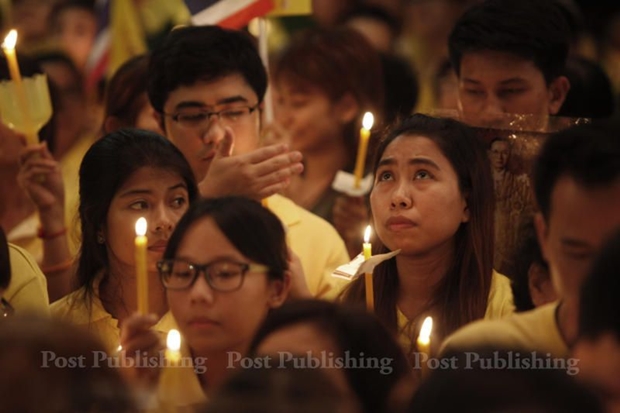 The scene during the candle-lighting ceremony at Siriraj Hospital. PATTANAPONG HIRUNARD The emotion of the occasion at Siriraj Hospital was almost too much for some. PATTANAPONG HIRUNARD 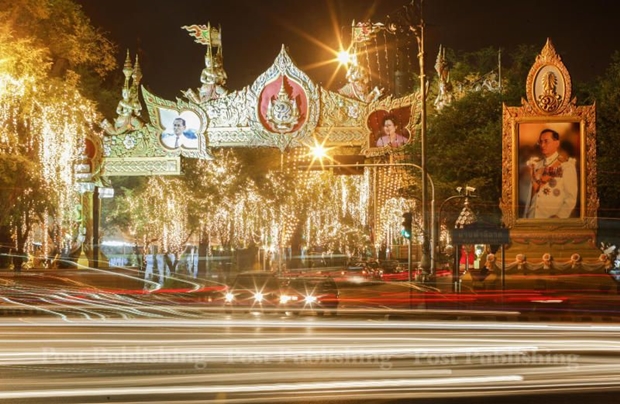 Ratchadamnoen Avenue is still glittering for the King's birthday, but His Majesty will not be attending his scheduled audience on advice from his doctors. PATTARAPONG CHATPATTARASILL 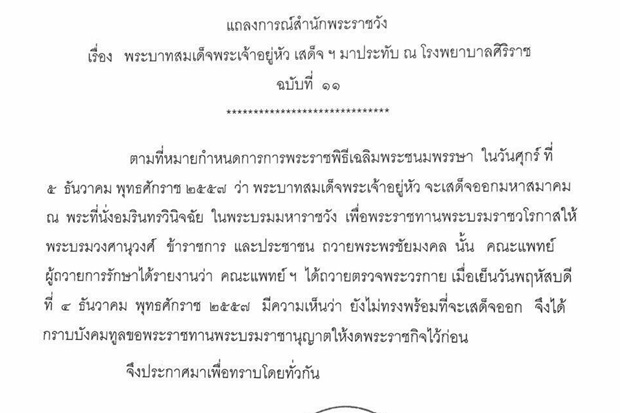 The Royal Household Bureau has just released an announcement that His Majesty the King will not be making his scheduled appearance at Amarin Vinitchai Hall, at the Grand Palace.

The King was due to appear for an audience at 10.30am to allow well-wishers to wish him a happy birthday.

The Royal Household Bureau announced, however, that after a medical examination last night that, in the opinion of his doctors, His Majesty "was not ready" to leave the hospital at this time. 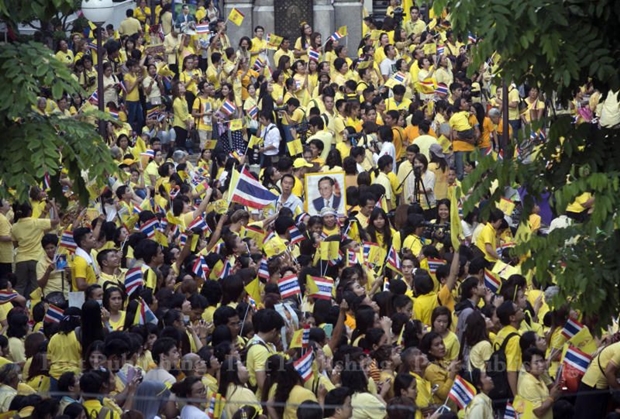 By early morning a large crowd of well-wishers had already gathered to hoping to the see the King leave for his audience at Amarin Vinitchai Hall, an event that has now been cancelled. SEKSAN ROJJANAMETAKUL

Here's more from our online reporters"

Hundreds of well-wishers wearing yellow shirts had been camping out at Siriraj Hospital and on nearby roads since Thursday to try to catch a glimpse of His Majesty, who was set to make a short trip to the Grand Palace to celebrate his 87th birthday.

Many of the well-wishers left their homes for the hospital Thursday after an official announcement said the King and Queen are in good health and will grant an audience at the Grand Palace today. 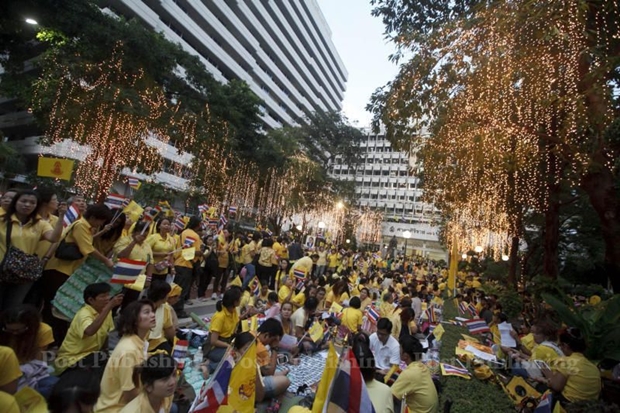 Many of the well-wishers at Siriraj Hospital this morning had camped out overnight. SEKSAN ROJJANAMETAKUL

Udom Kachintorn, dean of the Medicine Faculty at Siriraj Hospital, Mahidol University, said the hospital has provided space for people coming to see His Majesty.

“The presence of Thais turning up to welcome His Majesty will greatly boost His Majesty's morale,” Dr Udom said.

(11:30) Dr Udom has just elaborated on His Majesty's condition, saying he is still in a period of recuperation after his recent illness. Thus it is normal to keep him in the hospital and it doesn't mean his condition is serious. In fact, the King has been making a steady recovery, Dr Udom said. For a person of advanced age a recovery  period of 1-2 months is typical. He said His Majesty had very much wanted to make an appearance today.

King and Queen to appear on Dec 5

The festive lights are up and events have begun for His Majesty's the King's 87th birthday on Friday, December 5.

The spectacular Trooping of the Colours took place yesterday afternoon and this morning, Prime Minister Prayut Chan-ocha has led the cabinet in making an oath of allegiance to His Majesty. 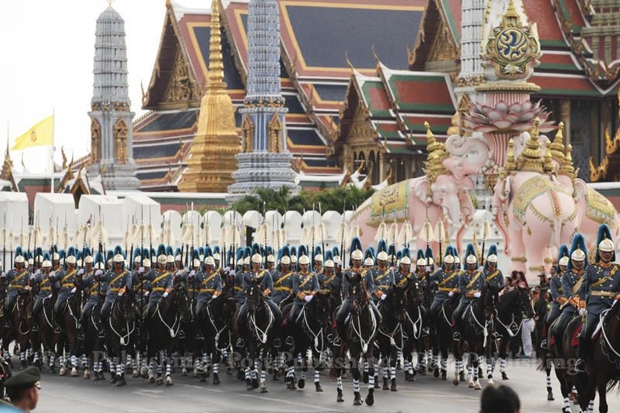 A scene from yesterday's Trooping of the Colours featuring His Majesty the King's Royal Guards. PATIPAT JANTHONG

The big event, however, was only announced yesterday.

The Royal Household Bureau has revealed that their Majesties the King and Queen, along with royal family members, will appear for an audience at the Amarin Vinitchai Hall, at the Grand Palace on Friday.

Prime Minister Prayut Chan-ocha leads the cabinet in an oath of allegiance to the King, pledging to be good government officials. CHANAT KATANYU

The monarch will appear in the hall at 10.30am to allow well-wishers to wish him a happy birthday.

His Royal Highness Crown Prince Maha Vajiralongkorn will lead the ceremony to wish the King a happy birthday after the 21-gun salutes. Prime Minister Prayut Chan-o-cha and the chairman of the National Legislative Assembly, Pornpetch Wichitcholachai, will respectively state their good wishes to the King.

According to the announcement, His Majesty will respond to the well-wishers and then leave the palace.

Video and still photos from yesterday's Trooping of the Colours.

Beginning at 9:17am Wednesday, the Grand Palace welcomed members of the public who wished to sign books of birthday wishes for the King. This opportunity will continue each day for the rest of the week.