A newly-discovered dinosaur was about 15-metres long and had a neck that could stretch almost eight metres. 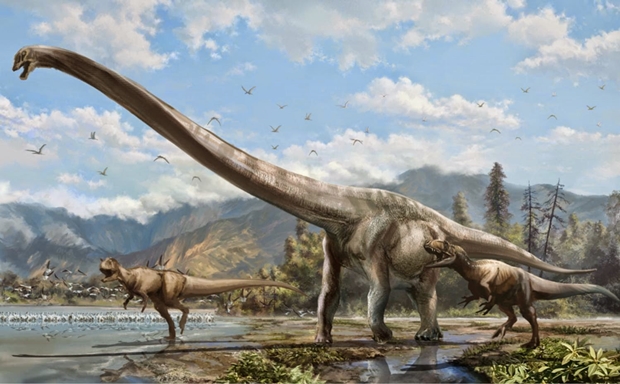 Image from Lida Xing, one of the discoverers of Qijianglong.

If you collect dinosaur models, it shouldn't be long before you can get a very unusual new one.

It is known as Qijianglong, the ‘Dragon of Qijiang,’ the district of China where it's skeleton was found.

"Qijianglong is a cool animal," says Tetsuto Miyashita, a member of the team of scientists who has been studying it. "Imagine a big animal that is half­ neck."

The huge dinosaur lived about 160 million years ago, was about 15 metres long and it's shoulders stood about two to three metres off the ground.

Far above that was it's head, supported by a neck that could stretch almost 8 metres long.

Scientists studying the bones in the neck say it was very interesting. It appeared to be filled mostly with air, making it remarkably light-weight. They also say it was much better at moving up and down rather than sideways – sort of like a giant crane.