A provincial police truck with its wheel clamped by a local officer is parked on Ratbamrung Soi 2 in Muang district of Surat Thani on Friday. (Photos supplied by Supapong Chaolan)

One nice thing about driving a police vehicle is that you can park it anywhere and no-one will doing anything about it. Right? Wrong!

One nice thing about driving a police vehicle is that you can park it anywhere and no-one will doing anything about it. Right?

Wrong – at least in the town Surat Thani in southern Thailand.

The proof is in the picture that went viral after it was shared on the Surat Thani Facebook page on Friday. It shows a parked Mitsubishi pickup truck with the standard police shield and the name of the unit to which it belongs – Provincial Police Region 8.

What's unusual is that the right front wheel of the pickup is clamped and there's a parking ticket on the windshield.

"My appreciation for the good example and equal treatment," wrote the person who posted the surprising image.

It turns out the truck was parked on Ratbamrung Soi 2, where parking is banned on even-numbered dates. There was no excuse for the police vehicle to be there since it was parked right next to a sign spelling out the regulation.

Pol Sen Sgt Maj Sangkhom Tiangpranee, head of a traffic unit at the Muang district station, spotted the truck when he was patrolling on a motorcycle at 7am on Friday. He reportedly stopped, clamped its wheel and wrote a ticket. 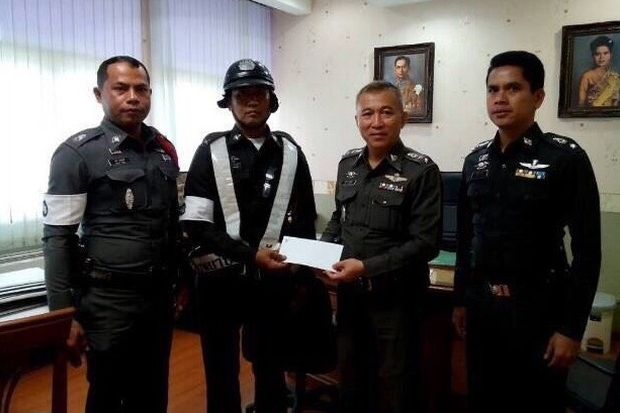 Yes, the fine – 500 baht – was paid and  Pol Sen Sgt Maj Sangkhom was given a reward for a job well done.

The owner of the truck, a deputy superintendent, will likely undergo a disciplinary investigation.

Adapted from a story by Supapong Chaolan