'Bike for Dad' procession began about 3:45PM, led by His Royal Highness Crown Prince Maha Vajiralongkorn. The number of cyclists was so great that many were still crossing the start line two hours later. (Live TV screengrab)

The 'Bike for Dad' activities attracted huge interest in Thailand. HRH Crown Prince Maha Vajiralongkorn led the Bangkok procession and hundreds of thousands of others took part across the country.

"Bike for Dad," a national success 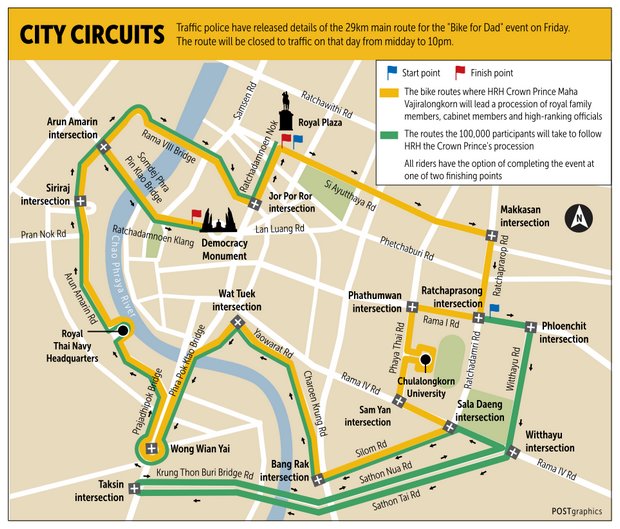 Note: Click here for a large map and a description of the route: https://www.bikefordad2015.com/history.php

Here is the best set of photos from our own photographers. It includes photos from the provinces: http://www.bangkokpost.com/photo/photo/792045/prince-princesses-lead-bike-for-dad-cyclists

Since I covered the 'Bike For Dad' events all day, when the main bicycle event began, I decided to do it live, using images from local television where were aired in HD online.

Photos from our photographers came in a bit later, so I'll include some of them here in a more organised story from our online reporters. The live coverage then follows.

Across country, around world, Thais 'Bike for Dad'

His Royal Highness Crown Prince Maha Vajiralongkorn led cyclists in the 29-kilometre ride, which started at the Royal Plaza around 3.45pm and travelled a loop through many areas of Bangkok, including across the Chao Phraya River into Thon Buri.

While the members of the royal family where the main focus of attention, it was ordinary people like these that made the event such a success. 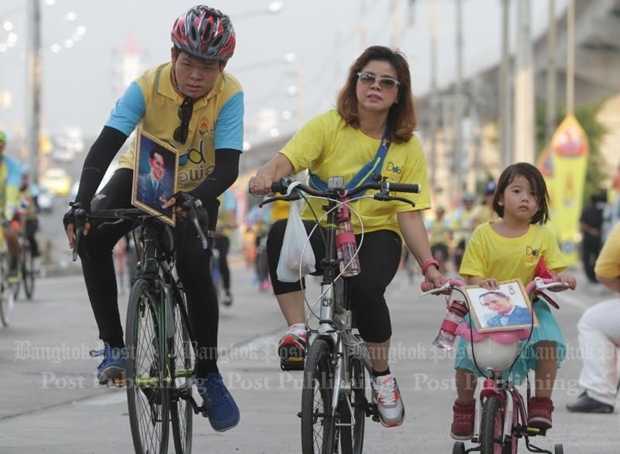 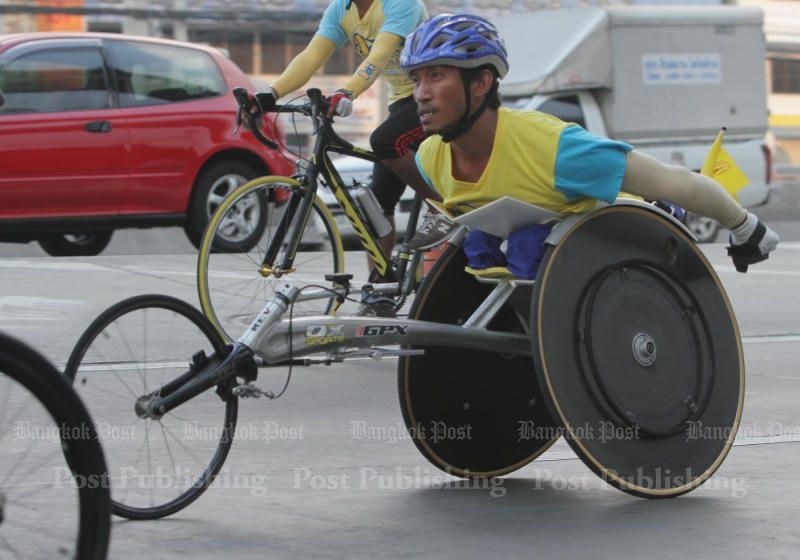 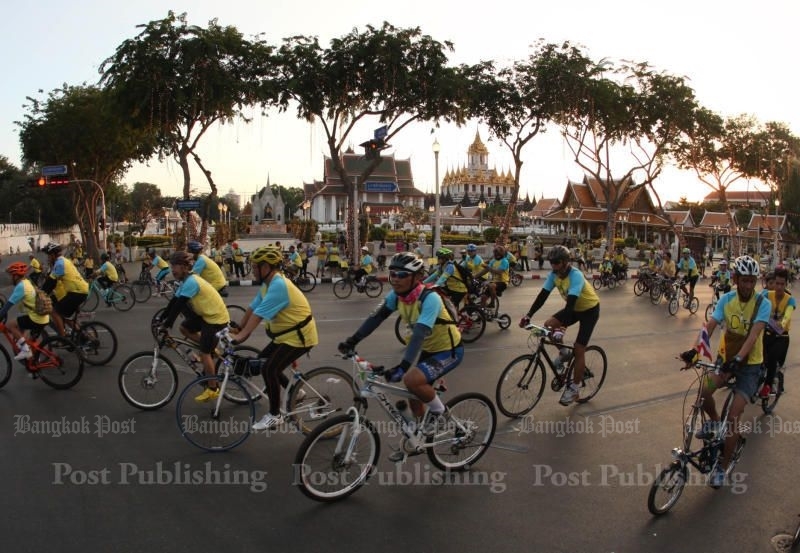 Well-wishers thronged roadsides where the Crown Prince led the peloton and chanted "long live the King". HRH Princess Bajrakitiyabha and HRH Princess Sirivannavari Nariratana joined him in the event eagerly awaited by Thais in both this country and in 66 cities in 52 countries around the world.

In Bangkok alone, 99,999 people had registered on the official "Bike for Dad" website, but the actual number of riders was higher, including those who could register.

Certainly one of the favourite settings for photographers was Chinatown where the Bangkok Post's Krit Promsaka na Sakolnakorn got these shots. 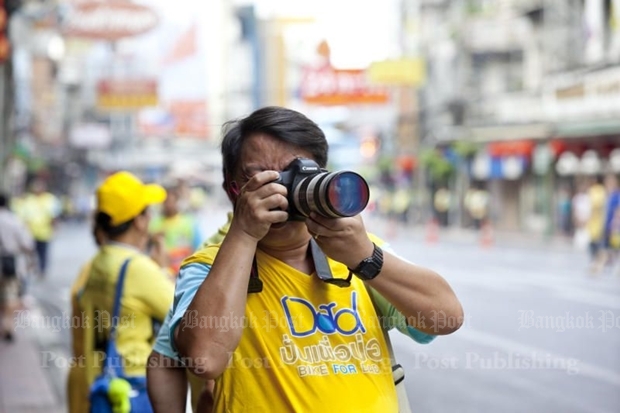 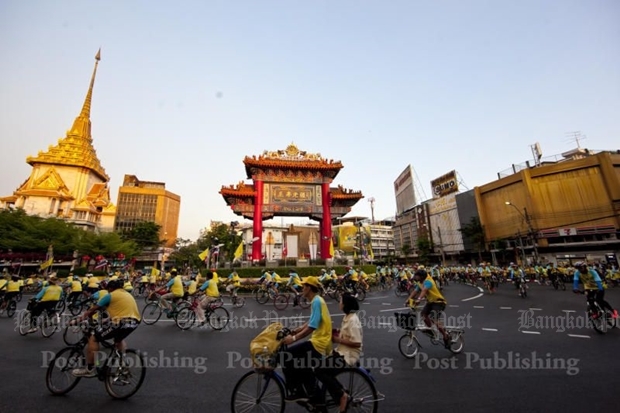 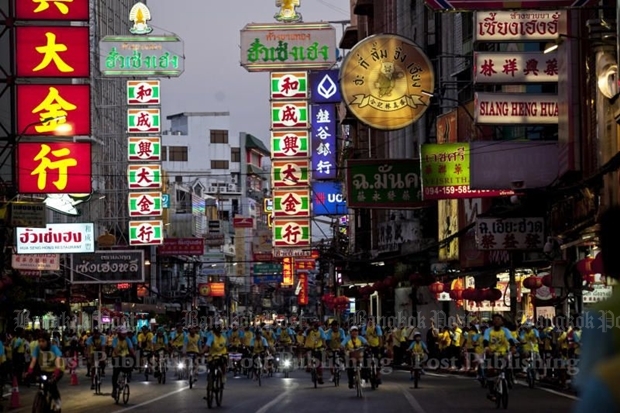 The event drew hundreds of thousands of people or more across the country. About 9,800 Thais living in other nations also registered to bicycle in their country of residence, according to the Foreign Ministry.

Mirror rides were held in each of the 77 provinces at the same time, except for Trat, where about 400 cyclists began pedalling in the morning for 129 kilometres starting at Muang district to Khlong Yai district and back in what was the longest ride of the day.

Pattani, Yala and Narathiwat provinces in the Far South also organised events, including a village in Khok Pho district in Pattani which is deemed a "red zone" for violence by security authorities.

Note: Unless otherwise noted, images during the Bike for Dad event are from local television coverage, which, as you can see, is remarkably good. 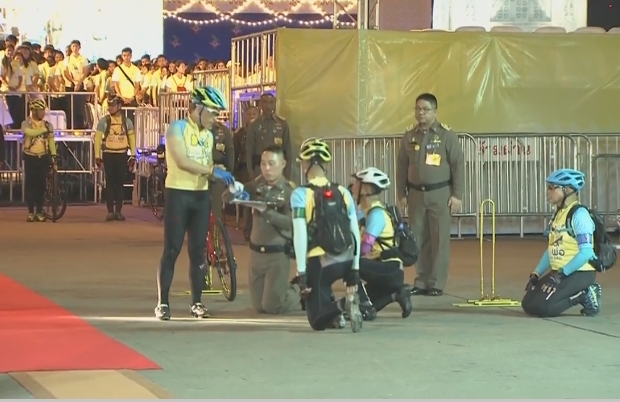 His Royal Highness Crown Prince Maha Vajiralongkorn has reached the Royal Plaza, just about 3 hours after starting from the same point. 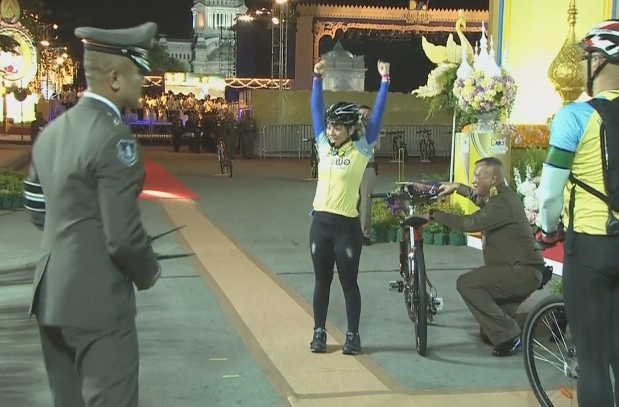 Not far behind was HRH Princess Siriwannawari Nariratana. An accomplished athlete she sped through the finish line like she was in a race. 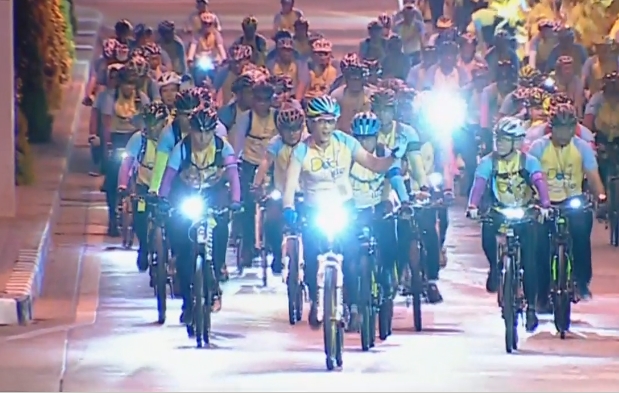 All of the main groups are rested and back on the road again on the final leg. Lights are on as darkness falls.

The first groups are now taking a rest stop at Royal Thai Navy Headquarters on the Thonburi side of the Chao Phraya river. Here is a chance for a photo at the starting point from Post Today photographer Seksan Rojjanametakul. 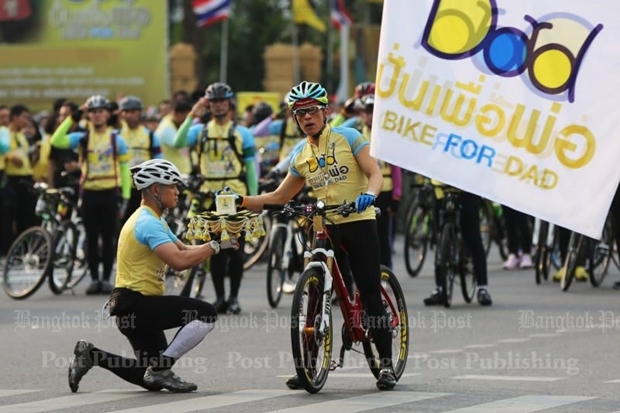 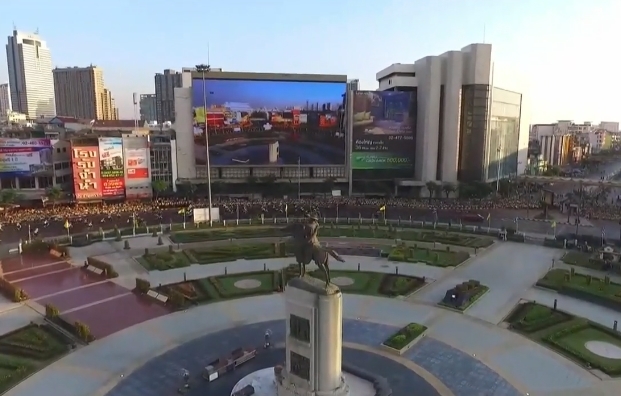 Group A, led by the Crown Prince, reaches Wongwian Yai in Thonburi. 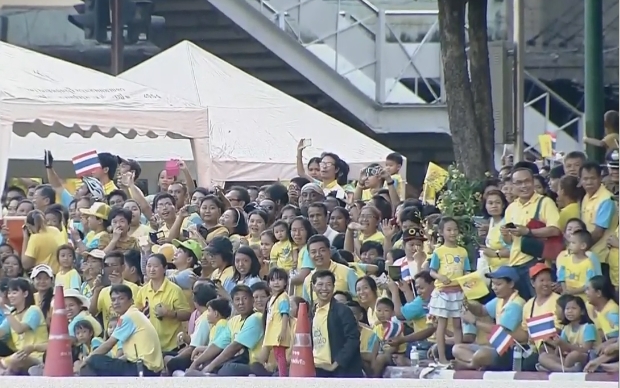 Excited crowds have lined the route throughout. 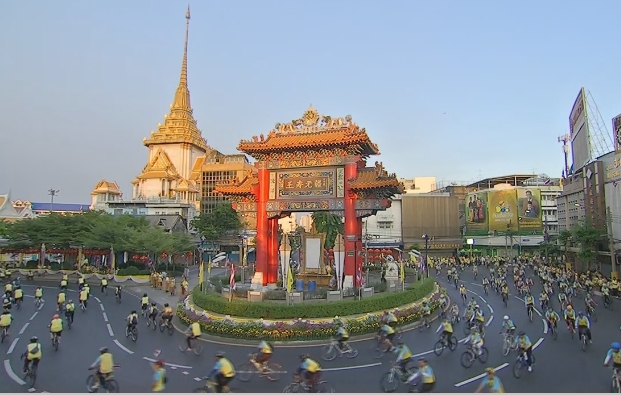 The view from Chinatown. 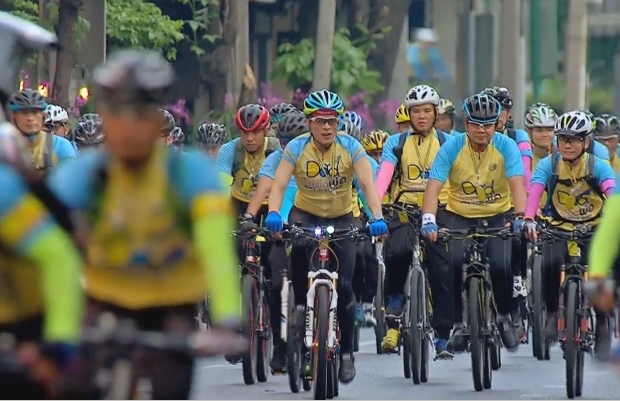 The Crown Prince and the Prime Minister near Yaowarat Road. 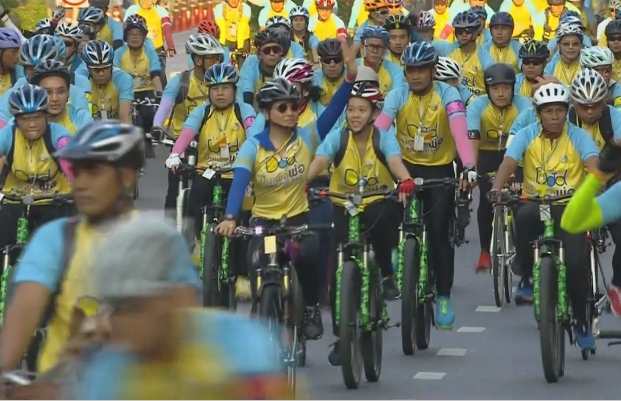 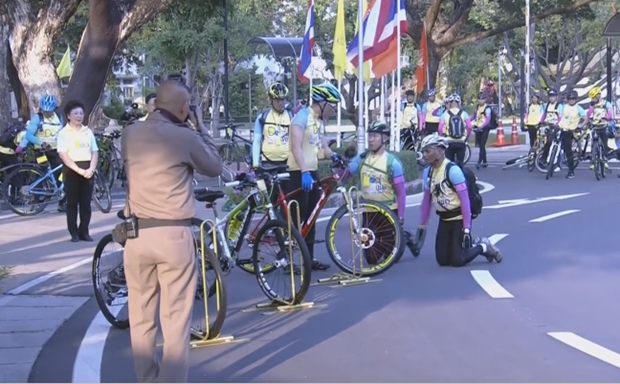 His Royal Highness Crown Prince Maha Vajiralongkorn prepares to lead his group away from Chulalongkorn University where there was a 20-minute rest stop. The other two bikes are for HRH Princess Bajrakitiyabha and HRH Princess Siriwannawari Nariratana who are also leading groups. 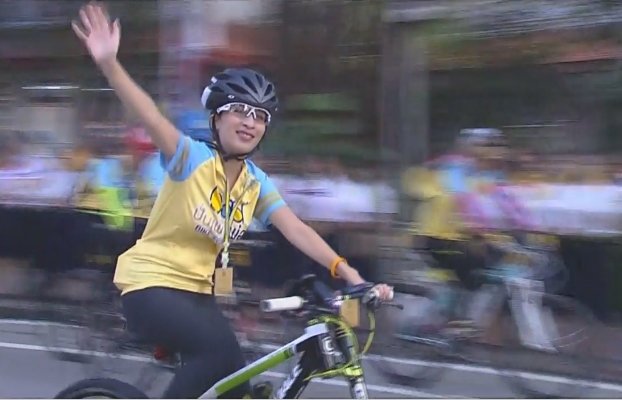 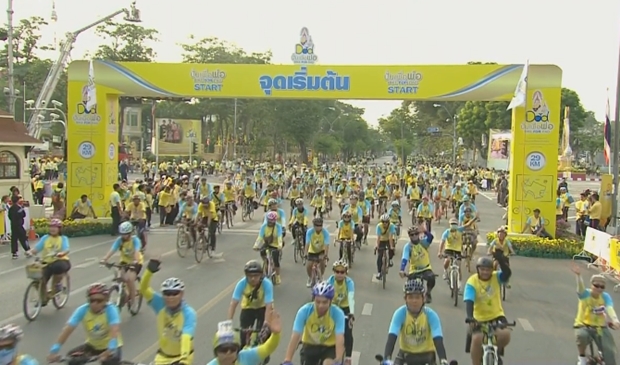 With almost 100,000 cyclist registered in Bangkok, many are still just passing the starting point – almost an hour after the event began. 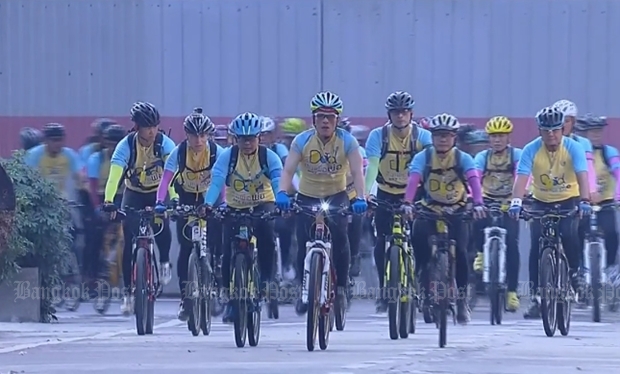 Thais in 66 cities around the world have joined in, including several cities in the United States. A group also pedalled past the pyramids in Egypt. 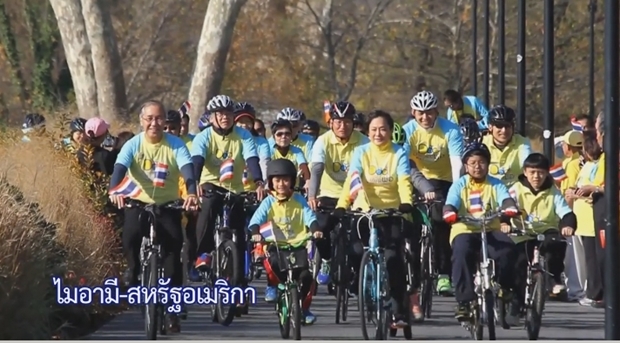 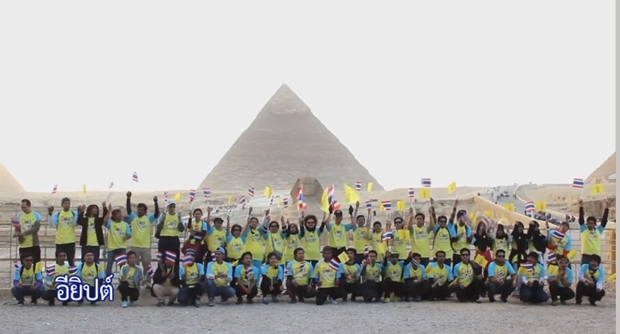 'Bike for Dad' will begin shortly. There is live coverage on all channels and the cameras have been moving from province to province showing large numbers of cyclists, more than 10,000 in some places, ready to begin. You can get HD coverage of the Bangkok segment online from Thai PBS http://www.thaipbs.or.th/live/ 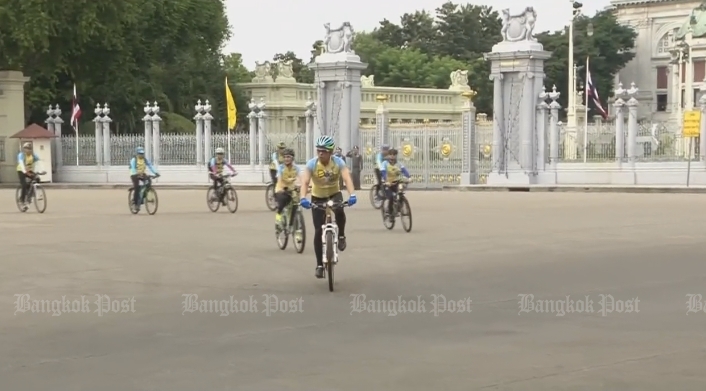 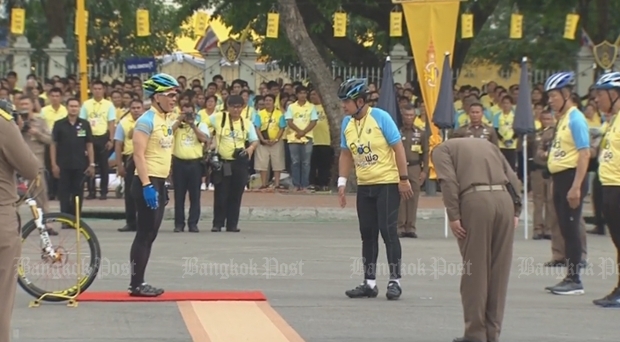 Ten of thousands of cyclists, both in Bangkok and upcountry, have been arriving at the designated assembly points, some since 9am this morning. Many have come as families. Pre-registration had made the process quite efficient in most cases. Participants receive food, drinks and even medical checks for those who want them. Bangkok road closures will start shortly along the route. 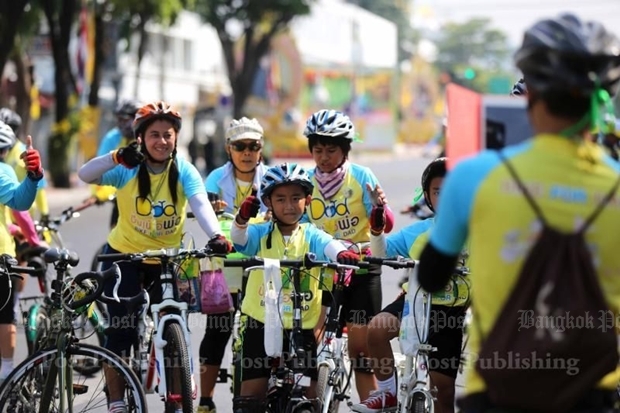 Participants in the 'Bike for Dad' event in Bangkok are arriving early. Many have come as families. NATTAPOL LOVAKIJ 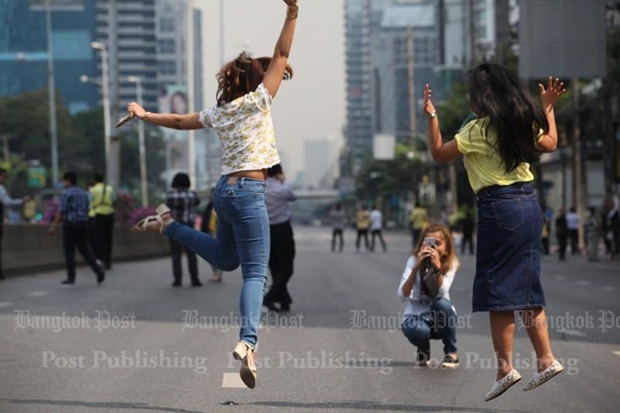 Look. No cars, No buses, No motorcycles. Pedestrians unenjoy an unusual sight in Bangkok near the Narathiwat intersection after the road was closed in preparation for the 'Bike for Dad' event. WICHAN CHAROENKIATPAKUL

The weather in Bangkok is quite hot for this time of year and today it is also quite hazy, so the many senior citizens taking part should make sure they have enough fluids to drink and hopefully they can find some shade before the event begins at 3pm. Fortunately, the humidity is only around 50 percent. 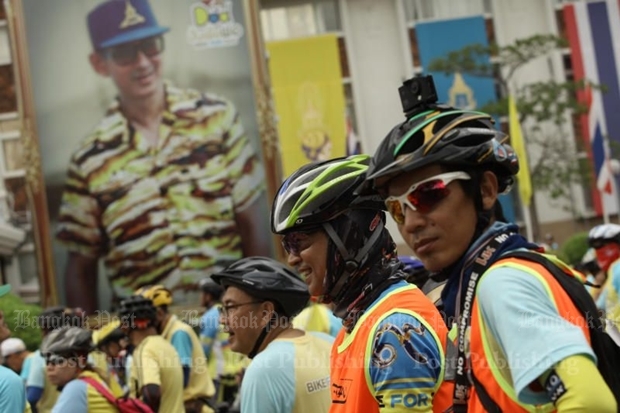 Everything is ready for the "Bike for Dad" activities in honour of His Majesty the King which take place today. The main cycling event in Bangkok begins at 3pm at the Dusit Palace Plaza (the Royal Plaza) and it will be followed by a Royal "Khon" performance, also at the Plaza. Both will be presided over by His Royal Highness Crown Prince Maha Vajiralongkorn. 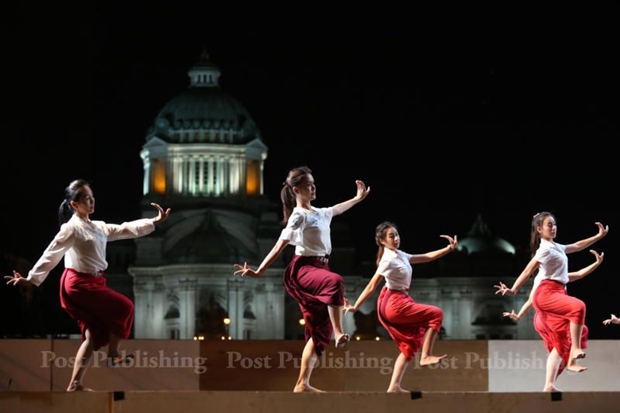 Dancers practice Khon, a classical Thai dance genre, which will be performed at the Royal Plaza on Friday as a part of the Bike for Dad event. PATTANAPONG HIRUNARD

It is not only Bangkok, however. A total of 607,909 people signed up to take part in the "Bike for Dad" cycling event during a nine-day registration period, 498,105 in the provinces where numerous activities will be held. In addition, there will be smaller events in 66 cities around the world with 9,805 registrants.

We will be watching all day as photos from our photograpers come in.

To get things going this morning, here is a wonderful short video about a very special 11-year-old  participant who will take part in the cycling event Phitsanulok. If you look closely, you will see he was born without arms.