The chill is ending (Updated Wed.)

Krissana Sriphetch, 43, uses discarded monastic robes to give warmth to dogs in the area of the Bang Na temple in Bangkok. By tomorrow noon, the coverings shouldn't be needed. SOMCHAI POOMLARD

Bangkokians awoke Wednesday to more chilly temperatures, but this should be the last full day of natural air conditioning as normal weather gradually returns. Northern areas will remain cool for longer, however. 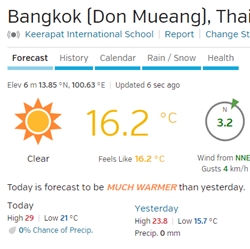 This should be the last full day of natural air conditioning for Bangkok as conditions should be back to near normal tomorrow. The big question today is will the forecasters finally be right about the days high temperature. High temperatures have ended up 4-5 degrees lower than predicted. (19:30: Once again, high temperatures fell short of predictions, risingly only to about 26. The winds diminished considerably in the late afternoon, however, and it felt noticeably warmer during my evening walk)

Elsewhere temperatures remain cool/cold in the North and Northeast, but they too will slowly rise according to forecasters. Chiang Rai begins the day at 10 degrees Celsius but the high is forecast for a balmy 21. In the Northeast, Khon Kaen had a 8am temperature of 14 and daytime temps should be in the low 20s.

Heavy seas continue to pound coastal areas in the South, with considerable damage done is areas like Hua Sai and Pak Phanang in Nakhon Si Thammarat. There some residents have had to be evacuated from their homes.

Meanwhile, the Department of Disaster Prevention and Mitigation has reported that fourteen people have died in the past few days as a result of a sharp drop in temperatures.

Twelve people were found dead Wednesday in many provinces mostly in the North and Northeast gripped by the cold snap. Two were found dead on Monday in Chainat province, once again as a result of the temperature plunge.

Of the 12 found Wednesday, four were found dead in Udon Thani, two in Chai Nat, and one each in Samut Prakan, Nakhon Ratchasima, Sakon Nakhon, Tak, Prachin Buri and Rayong, according to the department. 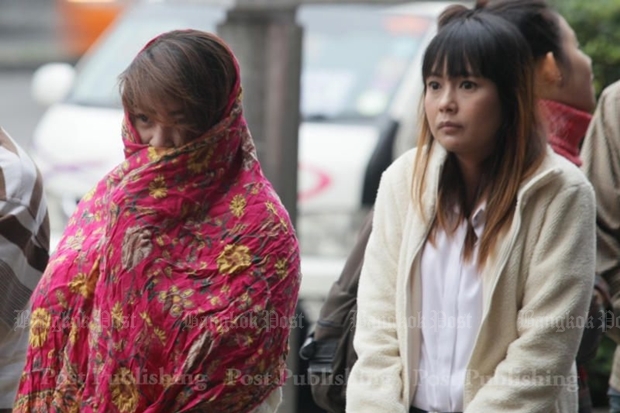 If you were walking into Monday's stiff wind, Bangkok felt not only chilly, but genuinely cold. Here, one woman wraps a shawl around her face and she and others wait for a bus try to get warm near a shopping mall in Pathum Thani's Rangsit district . APICHIT JINAKUL 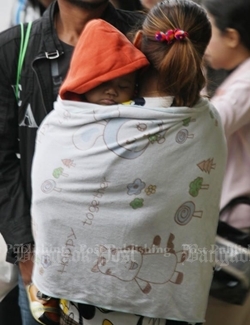 Bangkok's Tuesday morning temperatures were again in the 16-18 range, 15.8 at Don Mueang. Like yesterday, high temperatures were expected to be in the mid-twenties, perhaps as high as 28. Yesterday, however, there was little warming during the day with the high briefly reaching 23, or less in some areas.

As the noon hour approached, it is was chilly in the shade as the wind remained brisk, but it was comfortable in the bright sun with clear skies. Temperatures were already above 20 in many parts of the city. But, like yesterday, they didn't rise nearly as much as expected and by 6pm, they were on their way down. Tomorrow should see a gradual change towards normalcy, but will have to wait and see.  By the weekend, however, the heat will return.

"This might be the last time you feel cold this year," said Sathon Vijarnwannaluk, a lecturer at the Department of Science, Chulalongkorn University. "Please enjoy it and make yourself warm. Such things have happened in the country before," he said.

Wanchai Sakudomchai, Meteorological Department chief, said the cold has not yet reached the record set in Bangkok of 10C in 1975, and 11.7C in 1999.

The sudden change in the weather since Sunday has caused a sharp drop in temperatures over most parts of Thailand and caught many people off guard.

The cold spell and sudden drop in temperatures throughout the country is thought to have led to the deaths of at least two elderly people in Chai Nat province. 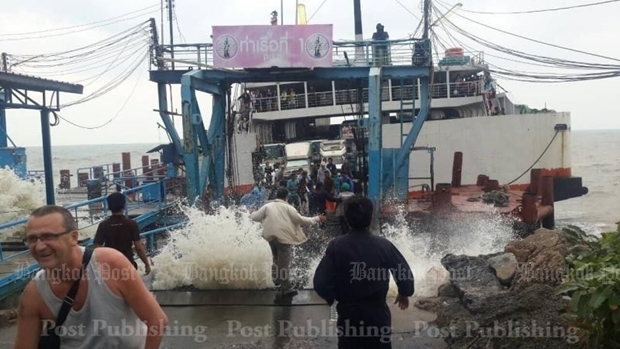 The South has been hit by abnormally heavy seas, sending waves over four metres and making life difficult for this Koh Sumui ferry. SUPAPONG CHAOLAN

The Meteorology Department warned Monday of a further drop in temperatures by one to three degrees Celsius in the next two days owing to a strong high pressure zone covering the South China Sea and upper Thailand. 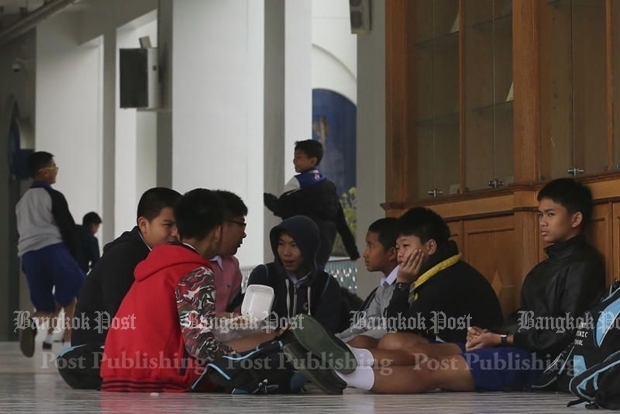 With Bangkok temperatures still below 20 degrees Celsius at noon on Monday and a strong wind, Bangkok students were feeling the chill. PATTARACHAI PREECHAPANICH

In Bangkok this morning the 8am temperatures were in the 16 to 18 degree range, slightly cooler in some outlying areas. That's an 8 - 10 degree drop from the same time yesterday, so it definitely feels like the season has changed. Temperatures are only expected to make it into the mid twenties today and a similar day is expected for tomorrow. By noon Monday, however, temperatures were still below 18 degrees in many areas of the city, and, with the strong breeze, it was a bit of a shock as I went out for a mid-day walk. Starting Wednesday, temperatures are expected to slowly return to normal and the weekend should be downright hot. 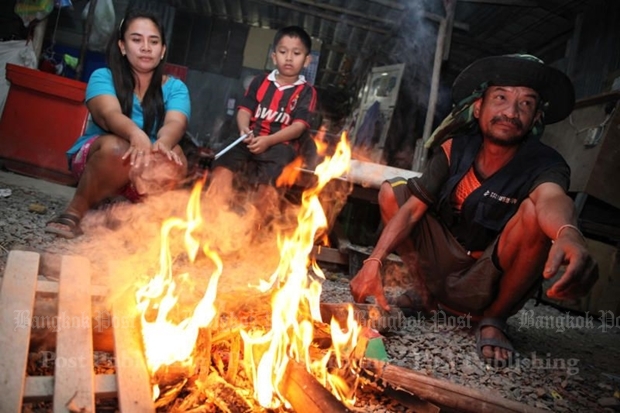 The big weather story is in the northern and northeastern provinces, however, where a bitter cold snap has residents shivering in morning temperatures in the single digits to the low teens

The Meteorological Department warned on Monday it is going to get colder in the northern half of Thailand.

The strong high pressure zone from China still covers the entire northern part of the country, with  thundershowers and strong winds oin some areas.

Because of this, the short cold spell is expected to become  more severe, dropping by another 2-4 degrees  Celsius today and tomorrow.

The department also issued a warning Sunday about rough sea conditions in the Gulf of Thailand.

The 8am morning temperature in Chiang Rai was only 9 degrees Celsius and the high was expected to be only 12C.

Chiang Mai was "warmer" at 14 Celsius, but, like most other northern provinces, temperatures were expected to stay in the teens throughout the day. 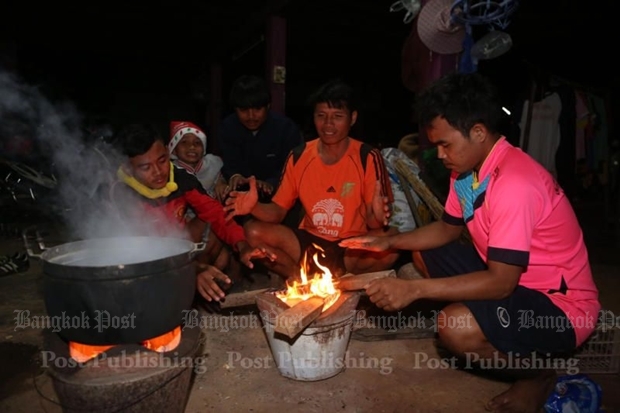 Villagers at Sai Yong village in Buri Ram's Muang district sit around a fire to warm themselves up Sunday night after a cold front dropped temperatures over the North and Northeast. PATTARAPONG CHATPATTARASILL

Meanwhile, in the Northeast, weather officials said in Bung Kan province in the Northeast the temperature was 11C with strong winds. Villagers living along the Mekong River were advised to keep warm.

The 8am temperature in Sakhon Nakhon was also 11C.

People living around the Phu Phan mountain range had to resort to bonfires to keep themselves and their animals warm.  Many new-born calves were reported to have died of the cold weather.

A 61-year-old man identified as Nawin Siripongthanakorn was found dead in his house on Rathbamrung road in Kok Somhong community in the Sakon Nakhon Municality on Monday morning.  He was lying dead near a fire stove.

Nearby residents said he and some neighbours drank local liquor last night to keep themselves warm. The neighbours left late in the night, leaving him alone in the house by the stove.

In Loei, weather officials said villagers in Dan Sai, Phu Rua and Na Haeo districts built bonfires to keep themselves warm. The temperature there varied between 8C and 14C.

Sunday began normally in Bangkok with the temperatures in the mid-20s at 8:30am. Rather than rising as expected, however, temperatures have dropped as light-rain began in mid-morning and a full-scale shower hit during the noon hour. The temperature was only 22 at 1.30pm and seemed unlikely to hit the predicted high of 30. Now, in the early evening, temperature is still only 22.8 and will shortly be in the teens. Gusty winds are making things feel quite cool. Even the Russians at our condo are wearing sweaters. Bangkok's cool spell will be short, however, and it should feel hot again by Friday.

Meanwhile, people are wondering if it will snow on the top of Chiang Mai's Doi Inthanon. 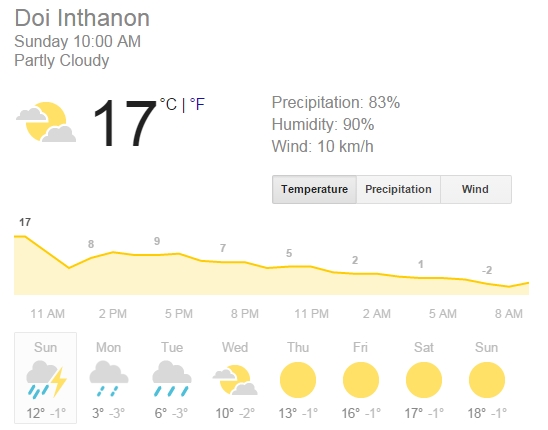 Temperatures will be below freezing over the next four nights on Doi Inthanon. From the Weather Channel.

Get ready. The chill is coming

The forecast hasn't changed. In fact, the temperature drops in Bangkok are now forecast to be 6 - 8 degrees Celsius. Some areas of the city may see temperatures as low as 16C. And with winds possibly reaching 40km/hour by midweek, it will definitely feel colder – the so-called "wind-chill" effect.

The real story, however, will be in the northern and northeastern provinces. In Chiang Rai, for example, the day-time high temperatures are forecast to be lower than Bangkok's low temperatures. The mountains, of course, will be the coldest and you can be sure lots of tourists will be out look at the frost that brings.

Here are the forecasted temperatures for Bangkok, Chiang Rai, Chiang Mai and Khon Kaen through next Friday. (From the Weather Underground) 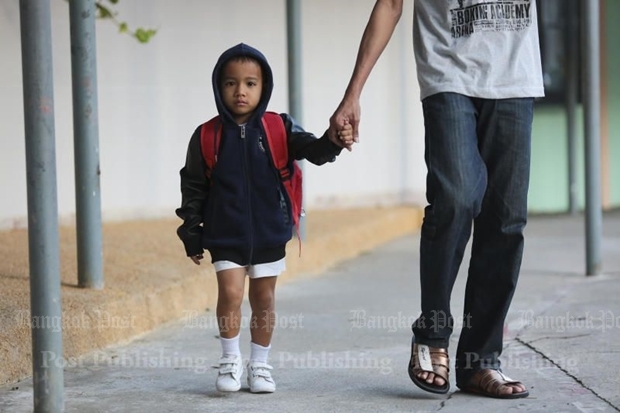 Get your cool weather clothes ready. You may finally get to use them for a week or so. PATIPAT JANTHONG.

Is the "cool season" finally coming to Bangkok?

Bangkok has not really had a cool season this year. The temperatures during December and January have been mostly in the low to mid 30s during the day and in the mid 20s at night.

Weather forecasters now say we are actually going to be getting some cool weather after all. It won't be a "season". In fact, it probably won't last for more than one week, but you will likely have a chance to wear a sweater or maybe even a coat.

From the Weather Underground.

Starting late Saturday, according to the Thai Meteorological Department, the temperatures in the Central Region are supposed to drop three to seven degrees Celsius. By Sunday, we may see a night-time temperature below 20 degrees.

Of course, the forecast may be wrong. If it is, don't blame me. I'm just the messenger.