Bus-train collision: How could it happen? (Updated)

The damaged bus sits next the tracks in Nakorn Chaisi district. The bus-train collision occurred in broad daylight with the approaching train clearly visible and sounding its horn. It killed three and injured 27. (Photos by Pattarapong Chatpattarasill)

Police are probing whether alcohol or drugs might be the reason a bus driver failed to notice a fast-approaching train which killed him and two others. Loud music in the coach could also have been a factor. An automatic safety barrier was set to be installed this week.

Here's the latest from our online reporters:

Deputy Transport Minister Ormsin Chivapruck said on Monday that the crash occurred at a grade crossing where the Department of Rural Roads had installed automatic barriers, but they were inoperative because the department had yet to deliver completed paperwork to the State Railway of Thailand (SRT).

He ordered the department this week to activate 20 such completed barriers stalled by red tape across the country.

Police spokesman Detnarong Sutthicharnbancha said on Monday that an initial investigation found that loud music had been playing on the bus before it was hit by the train. Police would decide if the music made it impossible for the driver to hear the train or if reckless driving was involved, he said.

Thai PBS reported that there are over 600 similar crossings nationwide and it is not clear where the budget will come from to bring them up to standard.

Questions remain as to why a double-decker coach carrying factory workers attempted to go through a railway crossing with a clearly-visible passenger train approaching at high speed.

Police are collecting blood samples from coach driver Nipon, 32, to determine whether he had consumed alcohol or other substances before driving.

Nakhon Pathom police commander Anuphab Srinual said the area around the railroad crossing is an open space where motorists are able to notice oncoming trains from far away. Before the crash, the train had sounded its horn several times, he said.

Amnart Promsombat, Moo 4 village headman in tambon Ngiew Rai, said he heard the train sound its horn. The coach was seen trying to apply its brakes but it was too late, he said.

The coach was carrying factory workers from a Nakhon Chaisi-based petrochemical company to Rayong's Koh Samet for a three-day trip. 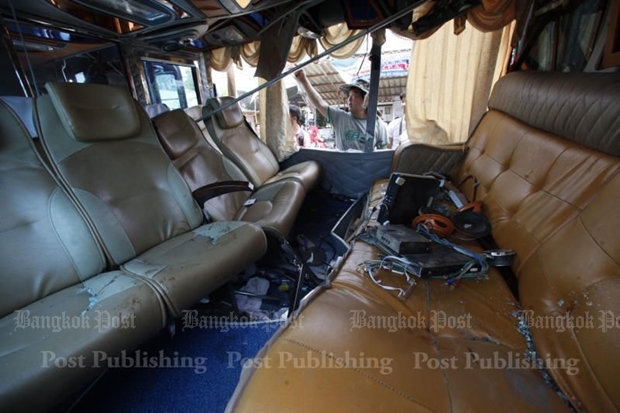 A view inside the damaged bus. There are reports that loud music inside the coach might have prevented the driver from hearing the train's horn.

Deputy Transport Minister Ormsin Chivapruck said one possible explanation for the driver's apparent failure to notice the approaching train was that music might have been playing loudly in the coach.

Unfortunate timing also played a role. Mr Ormsin said an automatic safety barrier has been installed at the railroad crossing but was not yet working, as it has only just been delivered to the SRT. The barrier will be in operation this week, Mr Ormsin said.

Adapted from a story by Amornrat Mahitthirook in today's Bangkok Post.

Yesterday's story (Includes video footage of the accident at the end) 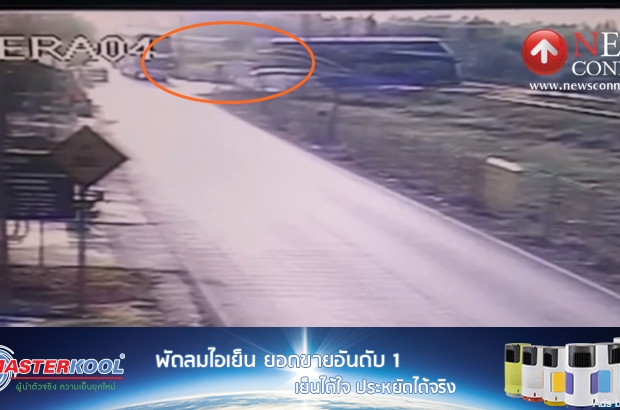 CCTV footage clearly shows the train approaching, but the bus continued without stopping.

Bus-train collision: How could it happen?

Once again there is clear proof that unattended, ungated railway crossings are unsafe at anytime.

It was a bright sunny morning with good visibility when a double-decker bus approached a railway crossing in Nakhon Chaisi district of Nakhon Pathom on Sunday.

The crossing was open to traffic with no signal, but video footage clearly showed a fast-moving train approaching.

For some reason, the bus driver continued to move forward slowly over the tracks. Within seconds, the train smashed into the bus, pushing it violently along the tracks. 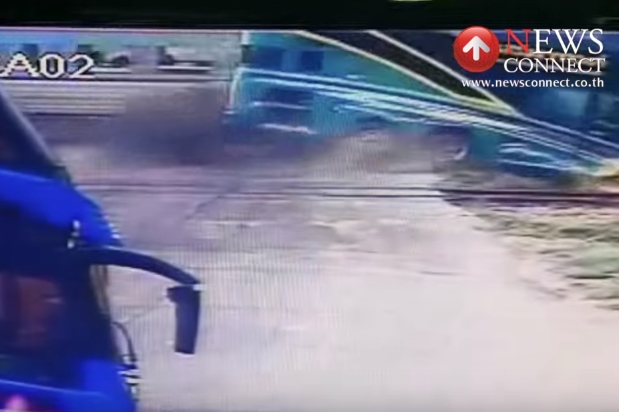 The moment of impact.

Initial reports say two people were killed and about 30 others injured.

The accident occurred at about 7.30am when the bus loaded with tourists heading for Koh Samet in Rayong was hit on one side by the train which was heading for Nam Tok railway station in Kanchanaburi.

The driver of the bus was reportedly killed on the spot and about 30 of the passengers were injured.