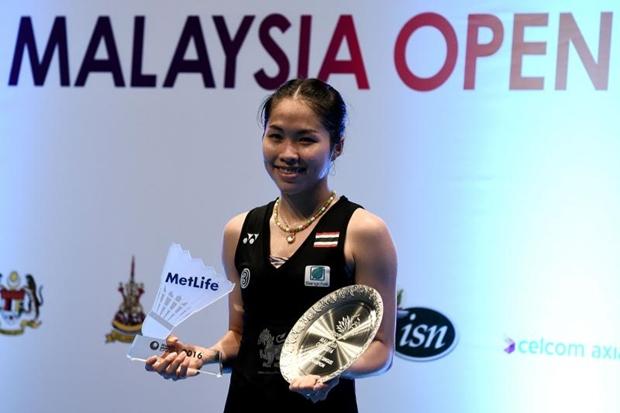 Last week it was India, today its Malaysia. Next week it is on to Singapore where Thailand's Ratchanok Intanon will try to make it three in a row against many of the world's best badminton stars. 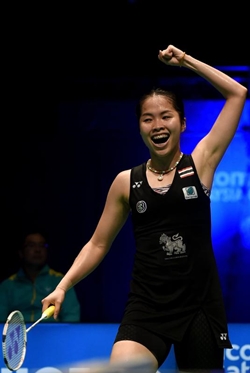 Well, apparently she changed her mind, because she look very excited after beating "good friend" Tai Tzu Ying of Taiwan to win her second major championship in two weeks.

Next week she will head to Singapore for the Singapore Open Superseries. She will also compete in the Asian Badminton Championships before heading for Brazil later in the year for the Olympics.

Update: Here are a few more match details from our online reporters:

Tai took the lead 6-2 before Ratchanok found her rhythm and came from behind to take the first set. The fourth-seeded Thai player took a comfortable lead in the second set at 20-11. The Taiwanese fought back by winning three consecutive points in a bid to keep the match alive before the in-form Thai wrapped up the game at 21-15.

Click "play" to listen to In-form Ratchanok wins again and "Download" to keep this file for educational purpose.

bid : an attempt to do something - ความพยายาม

championship : a competition to find the best player or team in a sport or game - การแข่งขันเพื่อได้ตัวผู้ชนะเลิศ

consecutive : following one after another in order - ติดต่อกัน

details : small facts or pieces of information relating to a situation - รายละเอียด

in-form : playing very well during the current period of time -

matter : to be important or have an important effect on somebody/something - เป็นเรื่องสำคัญ, มีความหมาย

nemesis : someone or something that continues to oppose you and cannot easily be defeated - คนหรือสิ่งที่ไม่สามารถทำให้แพ้

react : to behave in a particular way because of something that is happening around you or something that someone is doing to you - ตอบสนอง, เกิดปฏิกิริยา

rhythm : a regular pattern of movement or sound - จังหวะ

straight sets : (in tennis, badminton or volleyball) to win a match without losing any sets -