If a stranger told you that there is a Namibia-born South African who has been in Thailand only fi ve years and who could teach anyone to read Thai in a weekend, would you believe her? Gary Orman is that man and he promises that his "Read Thai in a Weekend" rapid language learning method can do just that. I repeat: in just two days (actually only 12 hours when you subtract the time for long lunches and multiple coffee klatches). If this sounds incredulous to you, you are not alone. 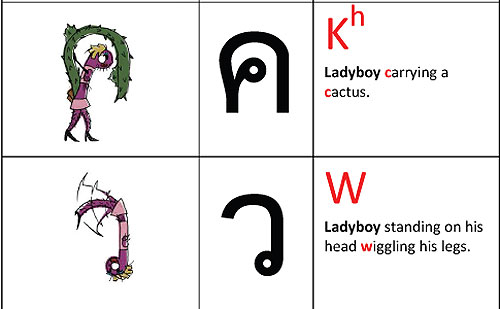 Ladyboy characters are dressed in purple and always engaged in strange behaviour. GRAPHICS BY KAY ONG, USED BY PERMISSION FROM RAPID LANGUAGE LEARNING

To teach novices to read Thai in only two days, the course must be either a gimmick or highly effective. Ellie Edelhoff, a yoga and meditation instructor, after only the fi rst day said, "I think it (the course) is really fantastic. It is a completely out-of-the-box way of learning, interesting and creative," concluding with, "I really appreciate a fresh new style to learning something that was completely opaque and impenetrable to me before." When asked if she could read after only one day, she responded, "I actually could. I started reading [automobile] licence plates last night and gradually moved to short words." She added, "I'm embarrassed to admit that I've lived here eight years."

What Read Thai doesn't do

But before examining how the course does what it does, let's fi rst look at what the course does not do. Orman's Read-Thaiin- a-Weekend promise is made possible by fi ve factors. He doesn't promise to teach you to (1) speak, (2) write or (3) aurally comprehend (listen to) Thai, only to read. Full stop. To read Thai, (4) you don't need to know Thai grammar (that's the writer's/ speaker's problem) or (5) to appreciate Thai culture, because you won't ever use the "wrong" word. The elimination of those fi ve language fundamentals saves hundreds of hours of class time.

Also, because he discards the traditional method of teaching Thai, time he doesn't need to teach the names of the 60 or so Thai characters, another great time saver. And fi nally, he is a mnemonist who uses powerful pictorials and cognitive memory devices to make each letter and its tone stick inside your superior temporal and angular gyri. Your brain will thank you.

Philosophy behind the concept

Orman is an independent learner who, as a student, cared more for knowledge than grades. He shunned the then-pervasive apartheid system of governance in his homeland while enjoying mathematics. He admits he was terrible at languages but quickly adapted techniques he mastered in maths to help him learn languages, including Afrikaans, French, Dutch, German and Hebrew.

"That's when I got interested in the psychology of learning, cognition, how to learn; and soon I got into the business of learning," Orman says, and continues with, "Today, it's called accelerated learning (AL) or brain-based learning. AL maximises what we (humans) are already good at," he says, while "neuroscience looks at what works naturally", he adds. "Visual thinking and pattern recognition are much more natural to human beings than verbal reasoning and logical thinking," Orman explains, as he expounds further with, "We are capable of recognising [and] categorising 100s of thousands of images, patterns and scenarios. And as teachers, we must harness that power." In conclusion, he justifi es his radical method of teaching Thai when he says: "Teaching languages, for me, puts it all together. If you are going to teach a language, you should start with visual concepts." 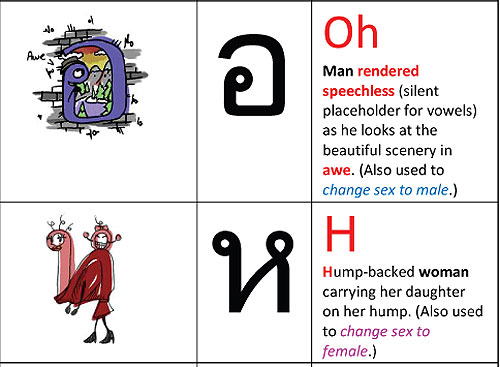 These two characters can force a ladyboy to ‘change its sex’ just by standing in front of it. GRAPHICS BY KAY ONG, USED BY PERMISSION FROM RAPID LANGUAGE LEARNING

To appreciate why his two-day promise is still so unbelievable, consider that Thai is a fi ve-tone phonetic and analytic language that consists of 44 consonants and about 20 basic vowels.

The vowels are non-sequential, meaning that they can be positioned before, after, above or below a consonant, or in a combination of those locations; while sentences generally have no spaces between words. Its abugida script includes implicit (meaning they are never written or seen, but always pronounced) vowels, such as: "o" and "a" [think กบ (for "gob", meaning frog) or สุวรรณภูมิ ("Suvarnabhumi", the name of Thailand's international airport)].

Importantly, the language groups its consonants into three classes: high, middle and low. The tones of each of those classes are frequently altered by the addition of four tone markers, whose primary purpose, many think, is to undo the tone rules you learned beforehand.

Now you got my attention

To grasp and retain the voluminous material, Orman must seize your attention and hold it for 12 hours. So it's not surprising that his methodology is heavily based on sex and mnemonic - memory grabbing - imagery. He plays foolhardy with traditional defi nitions and abandons wholeheartedly political correctness. For example, ladyboys are constantly falling ill from HIV/Aids and suffer from Aidsrelated maladies while being stabbed with daggers and sliced with knives. So, learners have to be mentally prepared to abandon many social and academic niceties and simply follow, unreservedly, Orman through the looking glass and down the rabbit hole, so to speak.

He is aware of the criticism, but defends his method thusly: "It is completely non-politically correct, but actually I went out of my way to make it a little bit shocking, because you're more likely to remember it if it shocks you." But some students seem to take it all in stride. Margaret Roche, who as a nurse coordinator at a local hospital must have seen her share of blood and gore, nonchalantly said, "It (the course) was a very good experience. Gary is a very good teacher and clarifi es many things about the Thai letters in a non-threatening environment. It's a lot clearer [now] than before." 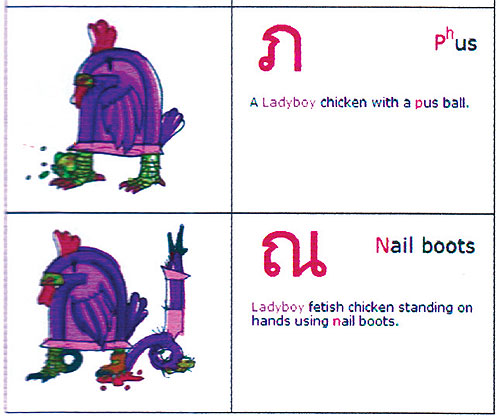 There are many Thai letters that masquerade as the proverbial ‘chicken’, taken from the name gaw gai. ‘Gai’ is the Thai word for chicken. GRAPHICS BY KAY ONG, USED BY PERMISSION FROM RAPID LANGUAGE LEARNING

"I looked at the Thai system and thought how I could rearrange it in a simple and logical way," Orman says and continues, "Next, I grouped all the letters with similar shapes together, such as all the letters represented by a "chicken" character, etc." He's talking about ก, ถ, ภ, ฤ, ฌ, ณ, ญ, ฎ and ฏ, but notice he doesn't use their Thai names, such as kaw kai, taw theung, paw samphao, etc. Nor do his students. Rebecca Carter, who's worked at the United Nations in Thailand for over three years, said, "I think (the experience) has been really good. This is the second afternoon and I can read. I got almost all of the reading assignment correct, but before this course, I could not read a single word in Thai. Not even the 'chickens'." Simon Gunn, a two-year resident of the Kingdom, frequent bar patron and managing director of Channah Thailand, said, "Before, I couldn't read a word of Thai. I didn't even know the 'chickens'. It's phenomenal, and now I'll be able to read the labels on beer bottles!"

My attention is waning. Let's talk about sex again. Because Thai uses three classes of consonants - high, middle and low - Orman chose girls, boys and ladyboys to represent the letters of the respective classes. But his attention to detail is critical. Girl letters only wear pink; boy letters wear blue and ladyboys wear purple. Most sexual psychiatrists would argue that there are only two sexes and that a ladyboy (preoperative, at least) is still 100 percent male; it's only his gender that has changed, not his sex. Orman tactfully avoids the distinction as you follow him further into the rabbit hole. And the male อ, just by standing in front of a ladyboy letter can "change the ladyboy's sex" to a male. Likewise, the female - standing in front of a ladyboy changes his sex to female (e.g., หมด and ออกกฎหมาย,). See the second graphic on page E1.

Since the brain functions best as a muscle and it learns optimally when it has to work hard at making visual-mental-cognitive connections, Orman cautions his illustrators not to include too much detail in each drawing. But notice, too, there are little hints in each drawing that tell you the sound, tone and class of the letter. In the "ค" graphic on page E1, just by the visual alone, you immediately know three critical elements: that the purple-clad (1) ladyboy - which represents a (2) low class consonant is carrying a cactus plant, which tells you (3) the letter's sound is that of "Kh" for cactus. Similarly, the ladyboy, also low class, who's wiggling his legs represents the "w" sound, etc. Thinking is reduced to a minimum.

Of course, Orman never mentions the traditional names of the high, mid or low class consonants. Instead, he just refers to the pictures and uses his voice to represent the various tones. This is for maximum mnemonic effect. And he only calls the letters by the descriptions in the pictures. So to "spell" the Thai word for "pillow" ("mon"), Orman might say, "the hump-backed woman carrying her daughter (ห), the meditating ladyboy (ม), the man looking in "awe" out the window at the scenery (อ) and the ladyboy with nails on his boots (น)", which equals หมอน, with a rising tone. There, you've learned to read your fi rst word using the rapid language learning method. 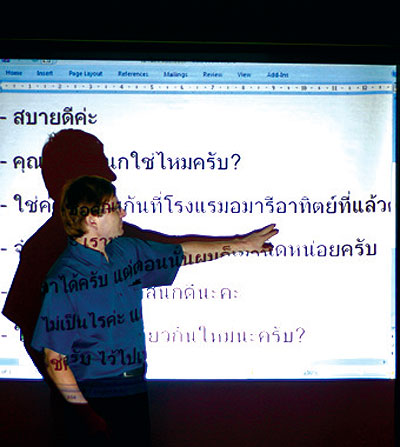 And you can imagine that after a while it all becomes comical. Ms Edelhoff said, "I fi nd it to be quick and easy fun." P.J. Broodbakker, an electronics engineering and applied physics major from Holland, who was merely visiting Thailand and leaving in two weeks, said, "Yeah, I would recommend the course." "The ability to read Thai accelerates your learning, hearing and speaking development," Orman says, adding that "knowing how to pronounce a word correctly accelerates your comprehension of conversation and your ability to speak correctly."Asked if he is a natural-born teacher, he paused and retorted: "I'm a natural-born student."

He reasons that "by being able to read, you soon realise that you are surrounded by words in Thai. There is a free, living Thai dictionary all around you! And it's often bilingual. [It] takes no effort. And almost always it's visual, because signs are attached to something - a bus, a restaurant, the train station. And if you forget the word, never mind, it's always going to be there. Go back to the bus terminal and refresh your memory, or review the menu. With the ability to read, you will start to learn Thai without any real effort by just being out along the street."

For more information or to test drive the rapid learning visit