The Healing power of a horse | Bangkok Post: learning 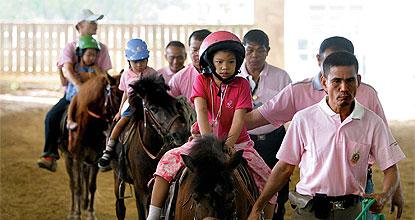 It was Tuesday morning and a group of parents and children were gathering, as usual, around the horse training stable within the Mounted Police Division 4 on Ekachai Road in Bang Bon district. 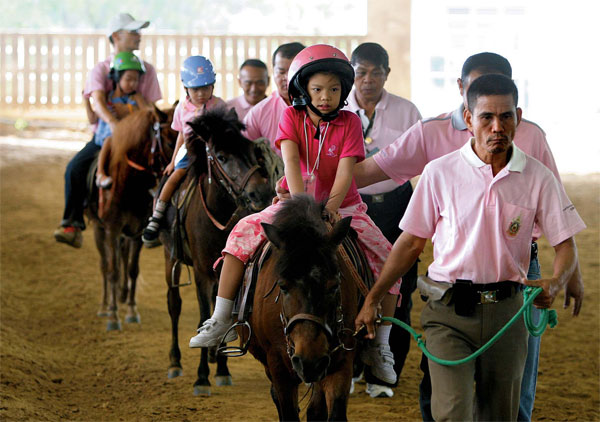 Inside the stable, three horses were ready for their special mission - to offer the children a ride on their backs.

The ride, however, is not for fun. It aims to provide physical and mental therapy for special needs children.

The kids who were queuing up for the rides are mostly autistic and those suffering from cerebral palsy. Some have overly stiff and rigid bodies. Some are unable to walk or sit normally. Some have a crooked spine, or are semi-paralysed. Many have problems controlling their movement. 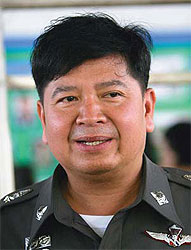 Some of the children have gone through this therapy for over a year, and apparently their symptoms have improved. Despite the disabilities, it is surprising to see them balance and stay calm on the horse.

This treatment is known as "hippotherapy", which refers to a treatment that uses the multi-directional movement of a horse. Hippo in classical Greek means horse.

It has been implemented in Thailand since 2005. The Mounted Police Division 4 is the first to offer this kind of therapy free of charge. There are also a few more private organisations which provide similar services.

Pol Lt Col Somchai Boonmee, chief inspector in charge of horse and canine training, said hippotherapy may sound new to Thailand, but it has been recognised and implemented in Europe and America since 1900.

Pol Lt Col Somchai said the use of animals for the healing of humans has long been in use, and it is not limited to horses. 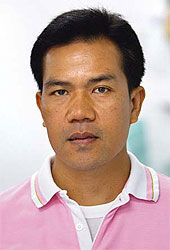 Pol Sen Sgt Maj Mitchai Soda, one of the trainers.

Dogs can offer psychological healing for patients, while dolphins can help in the treatment of depression, insomnia and attention deficit hyperactivity disorder (ADHD).

Dolphin sounds are also believed to stimulate the development of a foetus in a mother's womb.

"What makes a horse different is its movement, which synchronises the way human moves," said Pol Lt Col Somchai.

He explained that when a horse walks, its movement - up and down, left and right, back and forth - closely resembles human movement.

If a child sits on a horse, and the horse walks, it is like the child is

walking. The horse's repeated and continuing pace will help the child to memorise the movement, and that stimulates the child's own movement, the sensory perception, and the coordination of each body part, including back, neck, hips, waist, arms and legs.

"When riding a horse, a child has to balance his or her body on its back. If the child doesn't sit in the right posture, the horse will react by not following the command. So the riders need to force themselves to sit straight, using muscles to control their bodies. That automatically strengthens the muscles, helps their rigid bodies to relax, and improves their body balance," said the inspector. 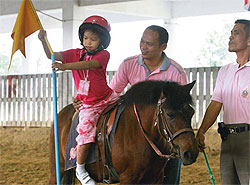 Also, when a child is on horseback, he or she will have various emotions - fear, excitement, panic, fun, delight and happiness. Those emotions stimulate the functions of body organs, including the cells, muscles and nerve system.

For autistic children, a horse can be like a mediator that enables them to interact with others and the outside world.

Who is this programme for?

Since 2005, nearly 2,000 children have gone through the programme, and there are 300 more still waiting in the queue. 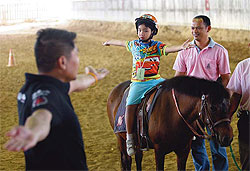 How is it operated?

The chief inspector said the training is usually held every Tuesday and Thursday, from 9am to noon. There are about 40 students taking part in each group.

They will take turns getting on the horse, four in each round. Each child will be on the horse for 10 to 15 minutes, and the course lasts for 12 sessions.

Before the therapy, the trainer will get the horses to run to push them to exhaustion, so they won't go wild when a child is riding.

There are 10 trainers altogether and two will accompany each child during the ride. One walks in the front to control the horse while the other walks beside to help support and take care of the child. For the children who can't sit at all, the trainer will first sit behind them, to support their back. 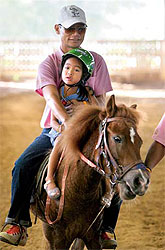 "The trainer also needs to practise holding the children properly. If caressed too much, they won't be able to help themselves, and that won't boost their development," he said.

Pol Sen Sgt Maj Mitchai Soda, one of the trainers, said the horses used for hippotherapy must be properly chosen and well prepared.

"The horses must be tamed before we get started. They must be trained to be undisturbed by any surrounding factors, to make sure they won't be panicked while the children are on their backs," said Pol Mitchai.

Before the training starts, the trainers also get the children to know and be familiar with the horses.

"Once the kids learn to understand, trust the horses, and know how to approach them, the horses will become their good friends. They will obey and be honest to their riders," he said.

During the ride, the trainers talk to the children, to encourage their interaction. Usually, they asked the kids to tell their names. While on horseback, the children will sometimes be allowed to command the horse to walk or stop.

In this way, horse riding will help stimulate their speech development. Those who cannot speak will begin to utter sounds and learn more about language.

After the ride, the trainers will help the children to do a little exercise, such as spreading their arms, and turning their body to the left and right, before getting off the horse.

Pol Mitchai said most children going through hippotherapy have shown some signs of improvement, although they are not completely cured.

Most children become more capable of helping themselves and become more interactive with others.

"They can remember their trainers and the horses. Some even refuse to ride other horses, except the one they are familiar with," he said.

He also found that the training helps calm the children's emotions. Some kids who are quick-tempered and never wait have learned to be patient while queueing.

Most autistic children have poor concentration and an inability to control themselves physically and emotionally. Some are naughty, while some are aggressive and often scream when they are displeased.

However, after riding a horse, their habits change. This is because when they balance themselves on the horse's back, they have to be highly concentrated.

As a result, children will automatically learn to be disciplined, to control their bodies and emotions. They'll learn not to be aggressive for their own safety. And once they can ride the horse, the children feel proud and more self-confident.

Nongyao Saroj, mother of 4-year-old Focus, said her son has improved after undertaking hippotherapy for more than two years.

The boy has had cerebral palsy since he was born. He often had seizures, never spoke and was unable to walk because of his weak muscles.

She came to the Mounted Police Division 4 because of advice from other parents whose children had similar symptoms.

"I've seen a lot of improvement in him. When he first rode the horse, he needed a trainer to sit behind him. Now he can sit on his own on the horse, with a little support from the trainer," she said.

At home, her son can do more things like clapping his hands, beginning to stand by hanging on to a railing, and walking for 10 short steps. He looks calmer and can stay still for a longer period.

"It may take some time, but my child's improvement is a great delight for me," she said.

Kwanjai Ploengranai, mother of 11-year-old Leo, was also happy that hippotherapy can help her child. Leo has autism and mild cerebral palsy.

"Before, he often pinched, bit others, or even screamed when he was displeased. Now he has better moods. He learns to wait and heed my orders," she said.

Leo's perception has also improved. He has more interactive skills, and is learning to look at the face of others while talking.

"Now he even approaches a person he is familiar with, like his trainer. His development is scaling up. From zero, it goes up continually, little by little. That's wonderful," she said.