V needs some time to herself

Photos by Varuth Hirunyatheb and courtesy of Universal Music Thailand

Since appearing on The Voice Thailand Season 2, the Thai-Belgian performer Violette Wautier (V) has received public and critical praise for her singing and acting abilities.

These days, it’s not enough for a Thai star to be good at just one thing. They are expected to be able to both act and sing really well. Not everybody can pull this off, but Violette Wautier (V) is certainly one of the few who can. Since appearing on The Voice Thailand Season 2, the Thai-Belgian performer has received public and critical praise for her singing and acting abilities.

V made such a big impression on The Voice that all four judges wanted her on their teams. After that, she featured on various TV soundtracks and musical collaborations. When she moved into acting, she won an award for her performance in the 2015 film, Heart Attack, before impressing again in O-Negative: the TV Series last year. Now V has returned to her musical roots with the single “Gor Kae Mai Me Chan (Just Without Me).” The song is written from the point of view of somebody who needs to be given more personal space in a relationship.

S Weekly met up with the 23-year-old singer at the Universal Music Thailand office where she told us about her new song, being a DJ and growing cactuses. 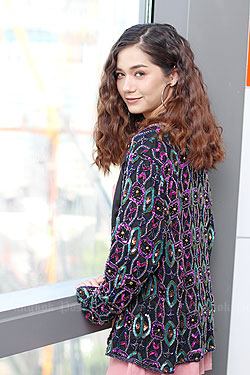 How did you come up with the music to “Just Without Me”?

V: I just wanted to use certain sounds in my song. I don’t know what words to use to describe the music. I guess it’s pop.

Why did you choose a mixed-race model to be in the video?

V: I wanted it so that you can’t tell if he’s Asian or European. I think that makes the video easier for everybody to relate to.

Do you think it’s annoying if your boyfriend keeps calling to check up on you?

V: It’s okay to check on me, but there’s a limit. He shouldn’t be too controlling and do it all the time. Everybody should be allowed to have secrets.  We don’t have to tell each other every single thing. I don’t like it if somebody keeps nagging me.

How much space should people give each other in a relationship?

V: If you trust and respect somebody, there’s no need to keep checking up on them. I don’t like anybody looking on my phone — I’d never look on my boyfriend’s phone. If you do that kind of thing too often, you’ll go crazy. Even if there is nothing wrong, people can let their imaginations run wild.

Is it true that you're working on some English songs?

V: Yes. There are four songs which will be released next year. I wrote the lyrics and melodies myself. We’re gradually working on the music. I don’t think it’ll be as difficult as “Just Without Me.” I know what direction I want to go in. 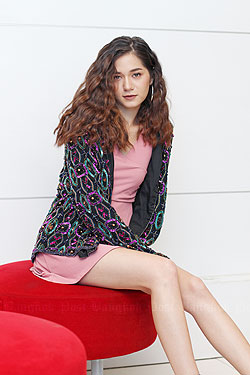 What music are you listening to at the moment?

V: I can’t stop listening to Angus & Julia Stone’s “Snow” and I love the new stuff from Imagine Dragons. One Thai band I really like at the moment is The Toys. I listen to lots of different kinds of music so when I make my own songs, I can mix them together.

You recently started working as a DJ on Cat Radio. How’s that going?

V: The first time, I didn’t enjoy it at all because I’m not very good at public speaking. I was by myself and I had no idea who I was speaking to. Afterwards, I said that I didn’t want to do the show alone, so they got DJ JuneJune Patcha to work with me. Now, I’m beginning to enjoy it.

We hear that you like to grow cactuses. Why is that?

V: I started growing them because I was stressed. They help me to relax because I can focus on them instead of myself. Once, when a cactus died, I even wrote a song about it.

What kind of role would you like to play in the future?

V: If there’s a sitcom like Friends, I’d love to be in it. It’s my favourite TV series.