Photos courtesy of Do Concert

Are you ready for another new K-pop group?

The demand for new K-pop stars seems endless. Thankfully, the Korean TV singing competition Produce 101 is able to meet this demand. The show is consistently able to turn trainees into new stars. Several singers from the show have been able to sell out fan meetings in Thailand. This list includes the six-member group JBJ who were in town on December 16 for JBJ 1st Fan Meeting in Bangkok: Come True.

JBJ were formed after viewers expressed their wish for the guys - Roh Tae-hyun, 24, Kenta, 22, Kim Sang-gyun, 22, Kim Yong-guk, 21, Kwon Hyun-bin, 20, and Kim Dong-han, 19 - to perform together. Their different music labels agreed to let the guys sign a seven-month contract for the band and release the EP Fantasy.

At Thunderdome, JBJ were given a fantastic welcome. The crowd responded enthusiastically to their performances of “Fantasy,” “Say My Name” and “As If a Dream.” During the final session, the audience went wild when the group walked through the crowd giving away flowers. It was a warm and fun night that made everybody in the hall happy. 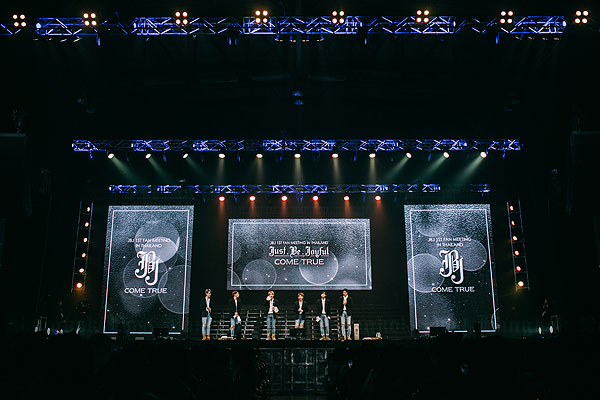 The day before the fan meeting, S Weekly and Thai press met up with JBJ at Pullman Bangkok Grande Sukhumvit. Here are some highlights from the conference and fan meeting.

Have any of you visited Thailand before?

Tae-hyun: Yes. I was here with my family when I was in kindergarten. Thailand was the first foreign country I visited. I went to see a crocodile show.

How did it feel to see so many Thai fans at the airport?

Dong-han: I was impressed. We didn’t expect to see a lot of people. It was like we were holding the fan meeting there!

What activities would you like to do while you’re in Thailand?

Dong-han: I would like to try a Thai massage. Last month, I had one in Seoul, but I think it must be better to have one here.

How did you become JBJ?

Tae-hyun: Our fans chose the members from the show. They named us JBJ, which stands for Just Be Joyful, because they want us to be happy onstage.

Can you tell us more about the EP Fantasy?

Kenta: It’s called Fantasy because we were formed in the imaginations of our fans. Their fantasy has come true.

What do you like to do during your free time?

Dong-han: I like to watch movies and TV series. I enjoy all kinds except melodrama.

Hyun-bin: I spend a lot of time on my mobile phone. I watch old movies, listen to music and browse online stores.

Kenta: I always have a Korean textbook with me. Whenever I have time, I study the language.

Tae-hyun: I spend time coming up with choreography or writing songs.

Yong-guk: I play games on my mobile phone. 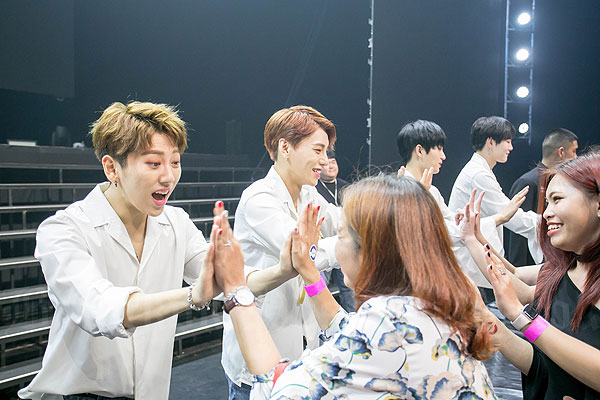 Can you tell us something about the member sitting next to you?

Dong-han: Kenta is very kind. He worries about us, so he nags us a lot.

Kenta: As the leader, Tae-hyun takes care of us. Onstage he’s cool, but offstage he’s cute.

Tae-hyun: Sang-gyun is full of confidence. He knows that he’s handsome. When he shows his flaws, it’s kind of cute.

Yong-guk: Hyun-bin and I have a lot in common. I have cats and he helps me take care of them.

Hyun-bin: Dong-han is optimistic. Even though he’s the youngest member, he’s mature.

Do any of you have strange sleeping habits?

Dong-han: Hyun-bin has keen ears. I sometimes sneak into his room to play a prank on him while he’s asleep, but he can hear the noise and wake up. And Sang-gyun puts a lot of stuff on his bed so he has only a tiny space to sleep on. 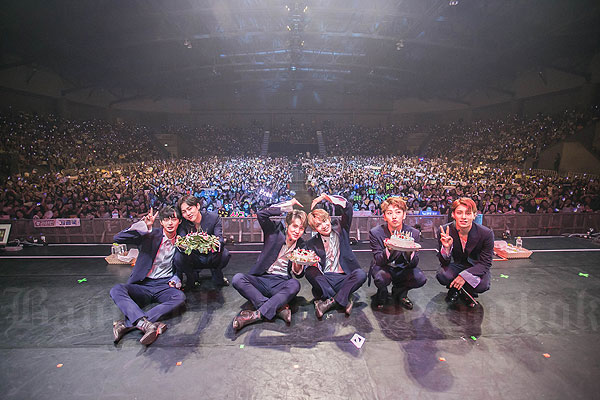