More+
Keep it in the family
Learning
Entertainment

Keep it in the family

It’s always a big deal when Hollywood royalty come to town. On the morning of March 14, media and movie fans gathered to welcome Drew Barrymore and Timothy Olyphant.

They were in the capital as part of their tour to promote the second season of Netflix’s hit horror comedy show Santa Clarita Diet.

In Santa Clarita Diet, the two stars play husband and wife Joel and Sheila Hammond, real estate agents who live in an LA suburb with their teenage daughter. But things get crazy when Sheila becomes a zombie and starts craving human flesh. So she and Joel must try to deal with her condition without making the neighbours suspicious.

At the press conference, Drew and Timothy were funny and charming as they told us what to expect from the second season. Here are some highlights. 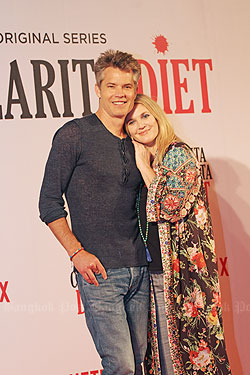 How’s Bangkok been treating you so far?

Drew: I’ve eaten a lot of food. [Laughs]. But I had a light breakfast this morning - spinach and a health drink. I guess I’ll have to start my Santa Clarita diet soon.

What can we expect from season 2?

Timothy: We pick up where we left off last season. The family are trying to accept their new reality. Joel and Sheila are trying to save their marriage and keep the family together. And at the same time, they want to do their best to save the world.

Drew: We’re trying to prevent it from happening to others. But maybe it’s already happened to somebody else. I’m trying not to eat people by accident. We want to find people that the world would be better off without.

What attracted you to the project in the first place?

Drew: Victor Fresco, who created the show, wanted it to be about a good marriage and the sacrifices we have to make in order to keep it together. I really like that. It has a lot of optimism. There’s a wonderful balance between the craziness of zombies, violence and gore, and the love of the family.

Timothy, will there be any changes to your character in season 2?

Timothy: Well, it gets harder and harder for Joel to be supportive. But he does the best he can. I can’t reveal too much of the story here - you’ll have to watch the show to find out for yourself.

You guys seem to get along very well. What’s the dynamic like off-camera?

Drew: This is it! We have a lot of fun. We both take our jobs very seriously but not as much as life. We’re happy and fun people. I love my family more than anything in the world and Tim loves his family. 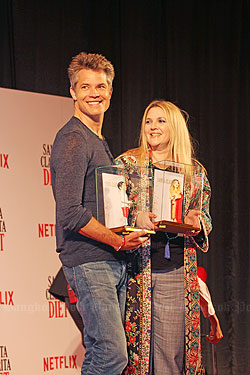 Drew, when we see you eating flesh on the show, what are you actually eating?

Drew: They make so much stuff. Sometimes it’s dehydrated apples, sometimes it’s fermented rice and sometimes it’s wet cake that looks like raw chicken legs. They’re all different things - I never know what I’m biting into. But I can assure you it all tastes disgusting.

Have you had any food here that you didn’t like?

Drew: Not yet, but I was given this small bottle of bird’s saliva - what you call bird’s nest soup. I don’t know if I want to try it or not.

Timothy: I heard that some people eat cow’s tongue here.

Have your families ever visited you on set?

Drew: My kids come visit me all the time. It’s kind of a weird family environment.

What do your kids think of the show?

Drew: They’re way too young to watch it. Sometimes I come home from work with spots of fake blood on my body. I have to explain that it’s just paint. I paint all the time at work - but only in red!

Timothy: I think my son is old enough. He seems to enjoy the show.