These days, the news is full of stories of bad things happening. It makes many of us feel that the world needs a hero. So it’s timely that this week sees Ananda Everingham return to the role of legendary lawman Khun Phantharak Rajjadej in the action fantasy sequel Khun Phan 2.

The character is inspired by the real-life policeman who fought crime in southern Thailand from the ‘20s to the ‘60s. But the film adds witchcraft, magic daggers and bulletproof tattoos. In the new film, Khun Phan comes face-to-face with two of the county’s most dangerous criminals - Suea Bai, played by Arak Amornsupasiri (Pae), and Suea Fai, played by Wanchana Sawasdee (Colonel Bird).

Ahead of the film’s August 23 release, S Weekly caught up with Ananda to find out all about the movie.

How does it feel to be back playing Khun Phan?

Ananda: It’s absolutely great. But to be honest, Khun Phan is one of the most draining parts that I’ve ever played. All the action set pieces and stunts put a lot of pressure on my body. I remember when we finished the first film, I said to the director, “I’ll see you again - maybe in 10 years!” [Laughs.] So when I was told that we were doing a second one, I knew that I had to prepare my body and mind.

What happens in Khun Phan 2?

Ananda: It’s different to the first movie. In the new film, society has become lawless and bandits rule. People have started to lose faith in the police and see criminals as heroes instead. Meanwhile, Khun Phan loses his job. As a result, he becomes more involved with the criminal underworld.

How does that happen?

Ananda: In the first film, Khun Phan completely believes in law and justice. But in the new film, he’s not so sure anymore. He feels betrayed by the law after he’s forced to leave his job. He decides to take some time away and ends up meeting some bandits. He realises that even though they are called criminals, many of them are more moral than the cops he worked with. He realises that the situation isn’t black and white.

Is there much magic in the new film?

Can you tell us about the two other main characters, Suea Bai and Suea Fai?

Ananda: Suea Bai is a real hero among bandits. He’s polite and clever. Pae created an accent especially for the character, which is cool. Suea Fai is basically the king of the gangsters. They both have their own magic weapons - Suea Bai has magic bullets and Suea Fai has an Erawan [elephant god] tattoo which makes him very powerful.

Is it true that the director used less CGI than in the first Khun Phan?

Ananda: I think so. The first movie had a spaghetti western feel to it, with lots of shoot-outs and explosions, which were done with CGI. In this one, they wanted to make it look more like an urban gangster film. So there’s less CGI and more practical effects, like real explosions, to make the action look more realistic.

Why should audiences check out Khun Phan 2?

Ananda: It’s a great Thai action movie. The production design is very realistic. It makes you feel like you’re actually there with the characters. If you’re a fan of fantasy and witchcraft, then you won’t be disappointed. 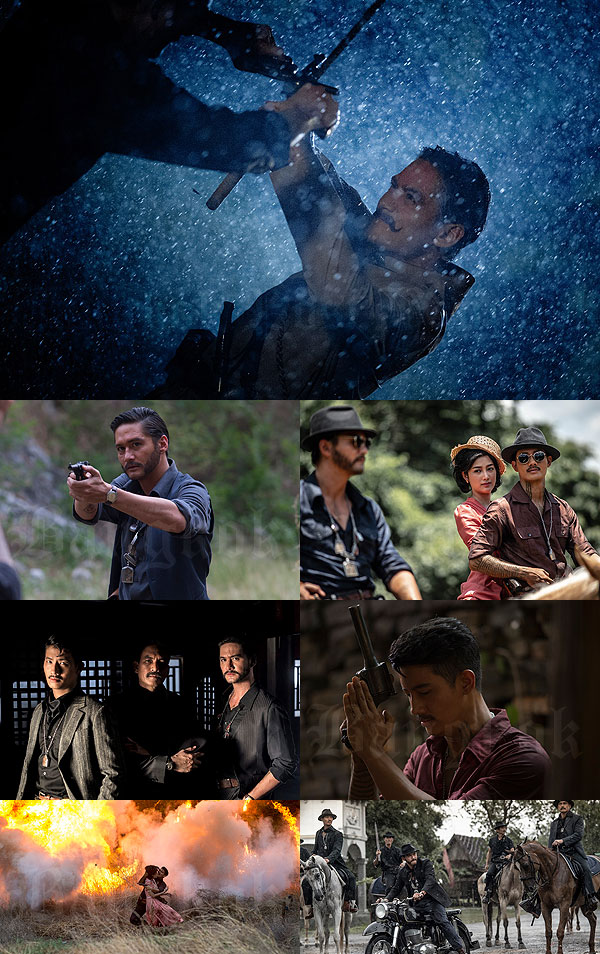