Instant lesson is a complete lesson, ready for use with your class. Hopefully, it will give you ideas on things you can do with the stories published each day in the Bangkok Post. 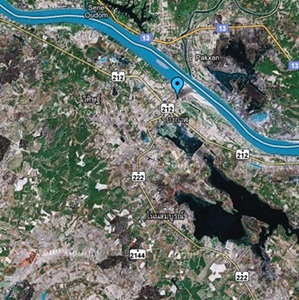 Recently, Thailand added a new province. This story was published just before the decision was made. Read it and then answer the questions that follow.

The proposed new province is located on the Mekong River on the border with Laos.

The northeastern province of Nong Khai is set to get smaller after the cabinet yesterday approved an Interior Ministry proposal to create a new province, Thailand’s 77th.

The new province would be Bung Kan (บึงกาฬ), currently a district of Nong Khai, situated on the Mekong River along Thailand’s border with Laos.

According to deputy government spokesman Marut Massayawanit, the proposed establishment of Bung Kan province follows calls from local residents who say they have to travel a long distance to contact authorities in Nong Khai.

The creation of the new province will bring local officials closer to residents and solve their problems faster.

It will also help authorities in their efforts to stem the flow of drugs, contraband, illegal migrants and other illicit activities along the border with Laos, Mr Marut said.

Bung Kan is ready to become a province as it has many facilities such as government offices, a court, a tap water agency, an electricity office and a post office, he said.

Part of the 870-rai Kud Ting public park has been earmarked for the construction of a provincial hall.

The creation of the new province has nothing at all to do with politics, said acting government spokesman Panitan Wattanayagorn.

Not everyone is convinced since the new province will have three MPs. Nong Khai presently has six MPs and is a battleground between the opposition Puea Thai party and the Bhumjaithai Party, a key member of the government coalition.

proposed – suggested as an idea for a group to consider ถูกเสนอ
cabinet – the group of government ministers who make and approve government policy คณะรัฐมนตรี
currently – at this time; now ในปัจจุบัน
situated – located ตั้งอยู่ที่
border – the official line separating two areas, regions or countries  เขตแดน อาณาเขต
establishment – the process of starting or creating something การสถาปนา, การก่อตั้ง, การจัดตั้ง
residents – people who live in a particular area ประชาชนที่อาศัยในท้องที่
contact – to communicate with someone  ติดต่อ
authorities – people who have the power to make decisions or enforce the law เจ้าหน้าที่ผู้มีอำนาจ
creation – the act of making something new การสร้าง
local – in or related to the area that you live, or to the particular area that you are talking about  ท้องถิ่น
effort – an attempt to do something ความพยายาม
stem – to stop something from increasing or spreading หยุดยั้ง,ยับยั้ง,สกัด
illegal – against the law  ผิดกฎหมาย
contraband – goods that are brought into or taken out of a country illegally  สินค้าเถื่อน, ของเถื่อน, สินค้าที่ถูกลักลอบเข้ามาอย่างผิดกฎหมาย
migrant – someone who travels to another place or country in order to find work ผู้อพยพ
illicit – against the law ผิดกฎหมาย
facilities - the buildings, equipment and services provided for a particular purpose สิ่งอำนวยความสะดวก
tap water – water that is sent through pipes into building น้ำประปา
earmark – to keep or intend something for a particular purpose
construction – the work of building or making something, especially buildings, bridges, etc. การก่อสร้าง
convinced – certain; sure แน่ใจ, มั่นใจ
battleground – a place where groups of people oppose each other สนามรบ
the opposition – the political party or parties that are not part of the government ฝ่ายค้าน
key – most important  ที่สำคัญ
government coalition – a temporary union of different political parties that agree to form a government together  พรรคร่วมรัฐบาล

Answer the two questions below.

2. Which of these reasons was given for making Bung Kan into a province? (Choose 3)
a. It had important facilities such as a court, a post office and government offices.
b. It would be helpful in controlling illegal activities along the border with Laos.
c. It would give the government greater support in the next election.
d. It would make seeking government services more convenient for local residents.
e. It already has built a provincial hall.

Use words from the vocabulary list to fill in the blanks below.

1. Buildings like your school's cafeteria, classrooms, library and auditorium are called _____________ of your school.

First of all, here is a bit more information on Bung Kan (and Thailand) that I didn't know. It was sent to me by a reader from  Germany. The reader pointed out that the text above is not completely accurate and he suggested some changes:

"Recently, Thailand added a new province." - the province is not yet
created, it was only approved by the cabinet. Unless I missed any
news, the law is now pending decision in the parliament, and finally
needs to be signed by HM the King, and only get into effect after it
is published in the Royal Gazette. So a bit better would be to say
"Recently, Thailand started the legislation to add a new province".

"currently a district of Nong Khai" - the point which really wrong and
IMHO needs to be changed, the new province will consist of eight
districts taken from Nong Khai province, the district Bueng Kan will
only give its name to the province and become the Mueang district of
it. .

"...since the new province will have three MPs. Nong Khai presently
has six MPs..." - this can be misunderstood that three MP are added to
the parliament, but in reaityl the MPs from Nong Khai are split between
the two provinces, so after the creation both Nong Khai and Bueng Kan
will each have 3 MPs.

"The ___________ of a new province is a quick process in Thailand, but
a very slow process in many other countries." - not entirely true. The
process was started in February when the proposal was send to the
Ministry of Interior, and since there are still some steps to be done I
doubt the province will become effective this year. But actually, the
first proposal for this province was filed in 1994.

Even the 77 is not entirely true - becausem in factm Bueng Kan will
become the 76th province. Most forget that Bangkok is not a province, but
a special administrative area, yet at the same level as the 75
provinces. So there will be 77 first-level administrative
subdivisions, but only 76 will be provinces.

Thank you very much Andy!

There is more in his blog.

Most of us probably know very little about Bung Kan, but there is quite a bit of information available on the Internet:

Bung Kan has its own wikipedia page in Thai: http://bit.ly/bw2hDJ

Here are some other sites that you might find interesting. See if you can find even more before you try the activity that follows.

After you gather information, think about writing two or three paragraphs about a trip you might take to Bung Kan. It is a good way to practice conditional statement, i.e., statements beginning with "if".

You can do this this easy way, by using real conditional like:

If I visit Bung Kan, I will walk alongside the Mekong River.

Or you can use the more difficult unreal conditional, like:

If I visited Bung kan, I would walk alongside the Mekong River.

Think about a place to stay, places to visit, things to do, food to eat, things to buy, etc. when you write your paragraphs.

Submit your own lesson

Let us know if you want to show off a successful lesson or method that you have used with Bangkok Post material. If we think it works for our audience, will be happy to publish it and give you full credit. You can send your proposal directly to me at: