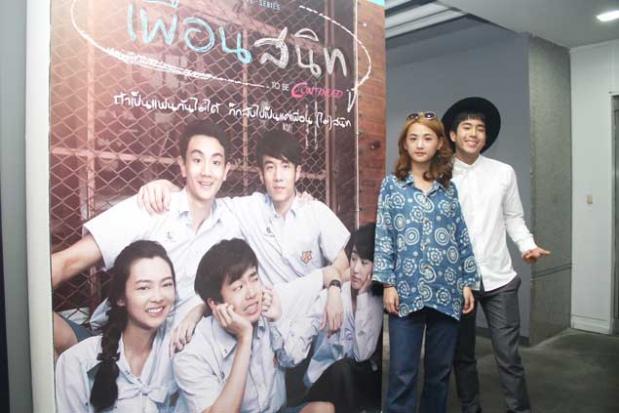 High school is often a time when people first fall in love. GMM 25’s Love Song Love Series: Puen Sanit (Best Friends) explores the world of young romance with its touching story of the relationship between teenagers So and Wan. In the show’s first season last year, we followed the young pair through many awkward situations and misunderstandings, before they finally realised their feelings for each other. Thanks to its convincing script and the fantastic chemistry of its leads, Best Friends became a hit.

Sadly, many high school sweethearts can’t keep up their relationships when they have to leave school and go to university. So as the romantic comedy returns for its second season - Best Friends to Be Continued - we find out whether So, played by Chanon Santinatornkul (Non) and Wan, played by Pavadee Komchokpaisan (Cook), can stay together in their new environment.

S Weekly met up with 20-year-old Non and 23-year-old Cook at the GMM 25 office to talk about the new season and their love of acting. 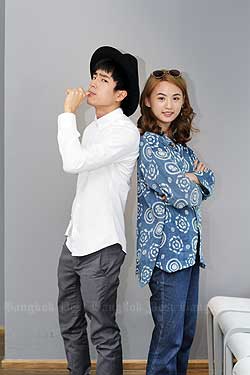 Has your attitude towards acting changed since you started working in showbiz?

Non: Yes, definitely. When I started, I was only interested in money and fame. But after taking lessons, I realised that acting is an amazing thing. I have fun whenever I play a new character. It has become what I love and now I just want to keep improving myself.

Cook: When I was very young, I associated acting with TV fantasy shows adapted from folk tales. But I’ve discovered that there are so many different styles of performance, whether it's on stage, in films or on TV. The first thing I learned when I took classes was that you need to understand everything about yourself so that you can find something in common with each character you play. That helps you to become the character. Acting always provides new experiences. It’s a career that allows me to do so many different things.

Non: Great. Cook is always full of energy. We didn’t have to worry about working late. Others would stay on set long into the evening, while Cook always tried to finish everything early. But she was still able to perform to a high standard.

Cook: Non is very mature. He’d go through his script making notes and then discuss his character’s thoughts and motivations with the director. He’s very focused and determined and he doesn’t hesitate to speak up and ask questions. I really enjoy working with him.

How have your characters changed in the second season?

Cook: Wan is starting to think about the future and feels frustrated with So because he’s not serious enough about life. To make everything more complicated, another guy starts to like her.

Non: So hasn’t really changed much. He doesn’t have a future goal and still likes to hang out and have fun. But he has to deal with a serious situation when a girl called Kaew becomes obsessed with him. 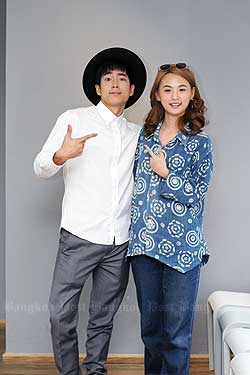 At one point, Kaew even threatens to kill herself if So won’t be with her. How would you deal with such a delicate situation?

Non: First, I’d try to figure out if they were just doing it to get attention. In that case, I wouldn’t see them. But if I thought they might really commit suicide, I’d have to go to them.

Cook: I agree, but you shouldn’t give them unrealistic hopes about the relationship. You’d have to try and be honest and reasonable with them. Otherwise, things could end up becoming even more complicated.

What makes the new season interesting?

Non: The show was originally inspired by the Da Endorphine song “Puen Sanit.” The new season isn’t based on the song, but both seasons explore concepts of friendship. The new season features more stories about So’s relationships with his friends. I think it’s really interesting.

You both appear in the upcoming sports drama Project S which airs on May 20. Can you tell us a bit about it?

Cook: I play the assistant manager of a volleyball team. I had to work with more than 20 guys who play the team members. I came to really like volleyball. When we filmed a game, I felt like I was really at a match. I got genuinely excited as I cheered my team on.

Non: I play an archer. It’s a very sophisticated sport. It’s great for practising your concentration. 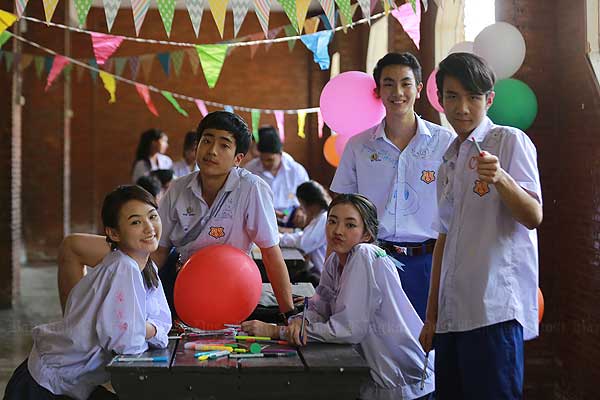 archer (noun): a person who shoots with a bow and arrows - ผู้ยิงธนู

folk tale : (n) a very old traditional story from a particular place that was originally passed on to people in a spoken form -

frustrated : feeling annoyed and impatient because you are prevented from achieving something - ผิดหวัง,ท้อแท้ใจมาก, หงุดหงิดใจ

hesitate : (v) to be slow to speak or act because you feel uncertain or nervous -

motivation : (n) the reason why somebody does something or behaves in a particular way -

obsessed : (adj) having your mind completely filled so that you cannot think of anything or anybody else -

sweetheart : (n) a person with whom somebody is having a romantic relationship -