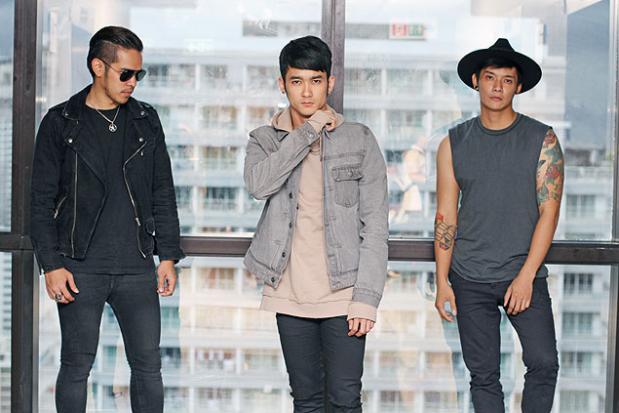 Six years ago, when the popular rock band Clash broke up, fans were relieved when several members went on to do new projects. 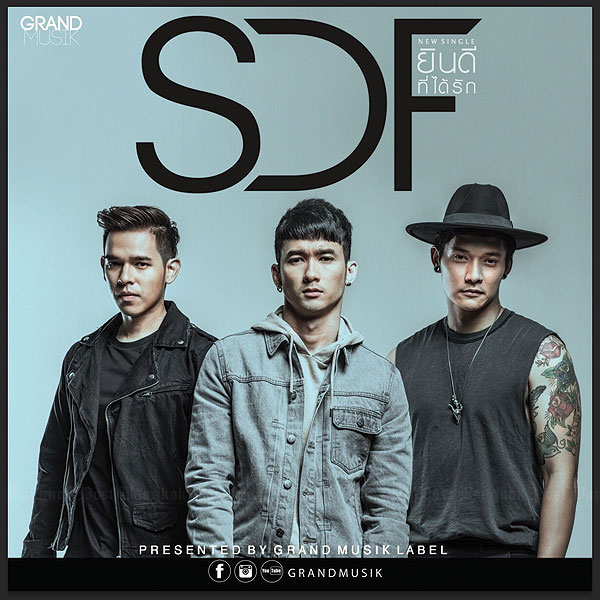 Clash guitarist Thapana Na Bangchang (Hack) started the band SDF in 2013 with four of his friends. They played shows all around the kingdom and had two songs — “Sutri (To the Extreme)” and “Kerd Ma Puer Rak Ther (I Was Born to Love You)” — featured in TV dramas in 2014.

But after this initial success, things didn’t quite go according to plan and SDF took a break. Eventually, they changed their line-up and signed to GMM Grammy’s label Grand Musik. Now a trio — Hack, singer Nitinan Chantaradecha (Champ) and bassist Chirasak Faising (Tai) — SDF have released their comeback single “Yindee Tee Dai Rak (Glad That I Loved You),” which has already attracted over five million views on YouTube.

S Weekly caught up with SDF at Grand Musik HQ to talk all about their triumphant return. What does SDF stand for?

Champ: It stands for Sex, Drugs and Family. Songwriter Patiwet Uthaichalerm (Fongbeer) suggested it to us. The idea is that our music is for people of both sexes, it’s like a drug to us and it brings us and our fans together like one big family.

How do you feel about the reception for the new single and video?

Tai: We’re all very happy about it. The video had a million views in its first week. That’s really satisfying.

Champ: We hadn’t released any new music for nearly two years, so our fans had been waiting a long time. And I also think that our new image has helped. We’re a trio now, which gives us a different look and feel. And we’re on a new label. I think that exposes us to a wider audience.

Can you explain the line-up change?

Hack: The other members decided to leave because of musical and creative differences. They wanted to go in a different direction and that’s cool.

Champ: We work well as trio. It’s easier to manage time and for the band to make decisions.

Tell us about the new song, “Glad That I Loved You.”

Hack: It’s another rock ballad in the style that we’re known for. But we made it more accessible than our previous music.

Champ: The lyrics are about a guy who recently got dumped. The girl left him for another guy. He’s hurting but keeping the pain to himself. Instead of being angry at her, he chooses to hold on to the good memories of their relationship. 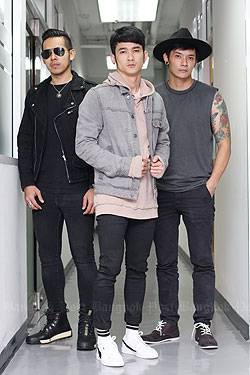 Hack, is it true that the song is based on your own experience?

Hack: Yes, partly. One day when I was cleaning up my bedroom, I found a few old photos from my university years. There were lots of photos of me and my ex. All these memories started flashing through my mind. I felt very emotional.

As well as a video, you’ve also released a companion short film. Why?

Champ: Yes, it’s a 12-minute film. It’s becoming necessary for artists nowadays to do this kind of thing. Fans get to understand the concepts behind the music and the video.

Will fans have to wait another two years before they hear your next song?

Champ: We are very happy with the deal we have with Grand Musik. We have big plans for the year ahead. We’ll be touring and releasing music. Fans won’t have to wait too long for the next single.

Click "play" to listen to Love is the drug and "Download" to keep this file for educational purpose.

audience : the people who watch/listen to an event happen - ผู้ชม

comeback : a period when someone or something becomes successful or popular again - การกลับมา(ดัง) อีกครั้ง

concept : a principle or idea - ความคิด

dump (verb): to end a romantic relationship with somebody - ทิ้ง, เลิกกับ

flash : to shine very brightly for a short time; to make something shine in this way - ส่องแสงวาบขึ้นมา

HQ (noun): headquarters; the place where an organisation or company has its main offices - สำนักงานใหญ่ กองบัญชาการ

label : a company that produces records -

lyrics : the words of a song - เนื้อเพลง

memory (noun): something that you remember from the past; the ability to remember information, experiences and people - ความจำ

reception : the way in which someone or something is received or welcomed - การต้อนรับ

suggest : to mention an idea or a plan for somebody else to think about - เสนอ, เสนอแนะ